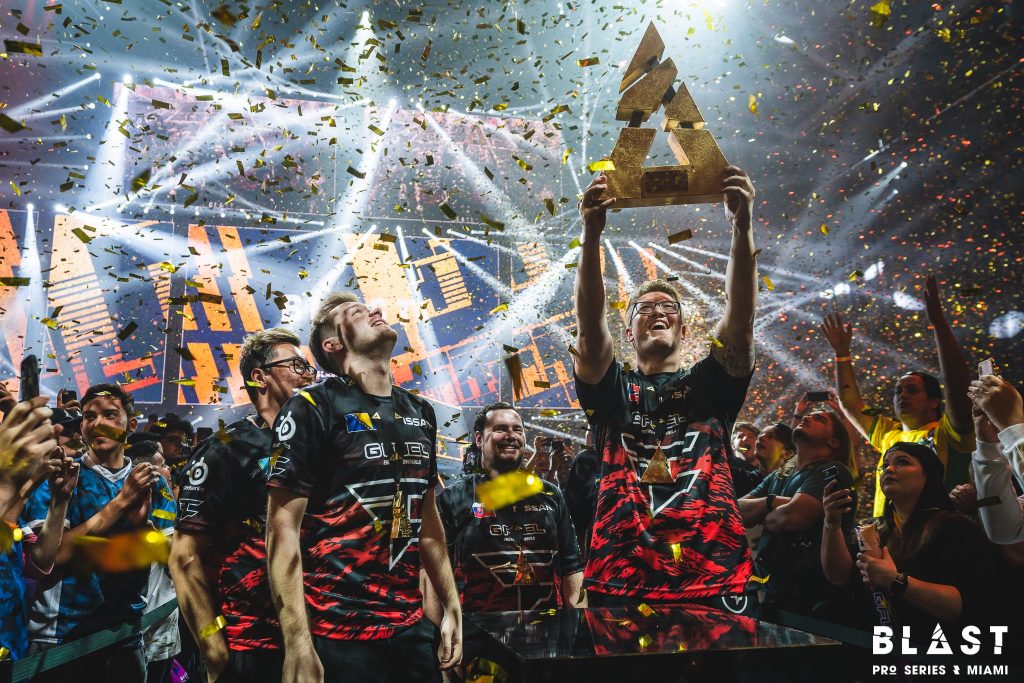 RFRSH Entertainment’s BLAST Pro Series tournament circuit took to Miami this weekend at the Watsco Center to host six of Counter-Strike’s finest teams with $250,000 USD in prize money at stake for the contenders. There was no shortage of surprises at BLAST Pro Series Miami and in the end, it was FaZe Clan that would win the event over Team Liquid in the Grand Finals. Here’s how things shook down between the six over the weekend.

Cloud9 performed pretty much as expected in Miami—rounding out in last place without taking a single map in the tournament. The North American organization’s prospect was bleak from the start after a series of roster changes in March and the unexpected departure of French rifler, Fabien “kioShiMa” Fiey had perpetuated the same problem C9 has had for the last year.

Though the showing was undeniably rough, they were able to steal ten rounds from Astralis and go the distance against Liquid—a hint of silver lining for the team moving forward. Despite some backlash after signing former OpTic Gaming fragger, René “Cajunb” Borg, Cloud9 appears to be keen on moving forward with him in the team. Our first glimpse of Cajunb was maybe a little underwhelming, but with some more time together Cloud9 may be able to start swinging some maps in their favor.

One dispiriting LAN result after another had forecasted a potentially rough outing for MIBR in Miami. After IEM Katowice at the beginning of March, the team has failed to place above fifth at three events and things did not look much more promising in South Florida.

The Brazilians had a rocky start in their first game against Na’Vi, getting trampled on Nuke and giving the impression this was another lost tournament for the squad; MIBR would respond by drawing a sharp-looking FaZe Clan on Nuke in a skirmish that highlighted the team’s mastery. The biggest headline from the event was furnished by the Brazilians as they thwarted Danish champions Astralis on Overpass in an unfathomable 16-2 scoreline; channeling antiqued strategies from their time together through the SK Gaming dynasty, key positioning from Fernando “fer” Alvarenga proved a major issue for the Danes on the map.

MIBR had their shot at the Grand Final in the fifth round against Liquid – however, they would falter 10-16 on Overpass settling in at third place and moving onto the Pro Standoff match against Cloud9 as a constellation.

Astralis bow out at fourth

Typically the Danish juggernauts, Astralis, are made mention of in the headline of every tournament they attend—but not at here. Things started off according to plan for the Danes as they breezed past Cloud9 and FaZe Clan in the first two rounds of the competition.

The first red flag would be raised by MIBR in Round 3—an unforeseeable 16-2 defeat on Overpass would be the harshest derailing the global titans have been dealt in longer than we can remember. Things would not get much better for them either in Miami. Astralis would be forced to relive their anguish on Overpass against Liquid in the next Round-Robin match, suffering yet another loss, albeit much closer than the last. The Danes’ tournament prospect boiled down to their match against FaZe Clan, an opponent whom they hadn’t lost a series against in opposition to since May of last year at IEM Sydney. The crucial map took to Dust II, and FaZe would come out gunning to grant them a 16-5 win and book their playoff spot against Liquid.

So is this the end of the ‘Astralis era’? Most likely not. The rickety performance from Astralis isn’t the first time the team has had a one-off event—not to give them too much credit though, the wide-margin losses were still hard to swallow. In their match against Liquid, the Danes issued cunning executions by the handful resemblant of their autograph behavior. Overall, Astralis seemed to only half show up in Miami and thus, they’ll have to take an early flight home this tournament.

The Grand Final came down to Liquid and FaZe Clan where a best-of-three would crown either one of the two teams as the champion in Miami. Coming into the last series, Liquid was absolutely on fire, going undefeated in the group stage and earning the first seed. As for FaZe Clan, their passage into the finals was largely unpredicted given how the team has performed over the last several months. Regardless, Day 2 was good to FaZe as they powered through much of their competition in a fashion we haven’t seen from the band in a long while.

Map 1 took to Mirage for FaZe Clan’s pick where the European superteam would furnish an uphill battle for their opposition off the start, barely lifting off the throttle through the very end. Though Liquid showed glimmers of life in the opening map, FaZe was swift in responding at every given instance, closing out the map in a dominating 16-6 scoreline.

Dust II would be next up in the map rotation, notoriously one of Liquid’s stronger map—one on which they’ve toppled Astralis on a number of times. Despite the team’s positive track record, FaZe would command Liquid on their T-side, stringing together the first nine rounds before they could answer with one point on the board. Håvard “rain” Nygaard was beyond destructive on FaZe’s CT-side, netting 26 kills in the first half alone and rendering the North Americans useless. Liquid would bounce back at the half, making things very interesting as they steadily narrowed the gap between them – though, it wasn’t enough to stop the pressure being put forth towards them.

FaZe Clan kept their composure and closed out Dust II 16-12 against Liquid, claiming the second BLAST Pro Series title of the year.

Next up in RFRSH Entertainment’s tournament circuit will be BLAST Pro Series Madrid on May 10.