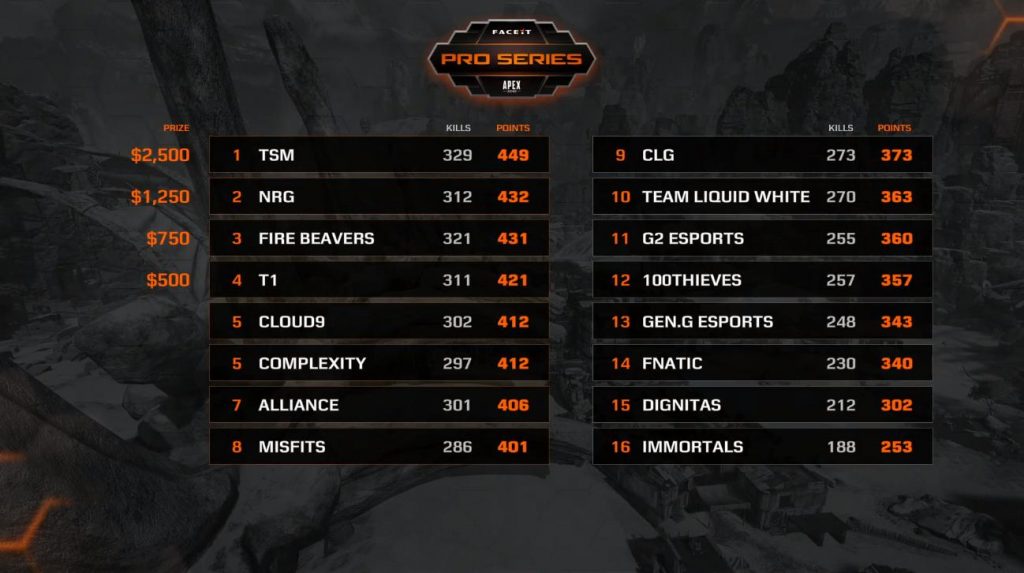 The leaderboard was pretty tight in week one of FACEIT Pro Series: Apex Legends. (Image courtesy of FACEIT)

The event is using a points scheme wherein each kill is worth one point, and completing a game in first is worth ten, second is worth five and third is worth three points. The 16 teams all competed in the same four-hour block, queueing into public matches.

Each team was able to complete 12 matches in the time period, with TSM coming out on top with 449 points. They came out on top by virtue of 329 kills and an average first-place placement across their games.

The last place team, by contrast, was Immortals, who averaged a 4.9 placement and managed only 188 kills, giving them a total 253 points. The top five teams were only separated by 37 points.

The tournament was centrally hosted by FACEIT on Twitch. It featured a reasonably sophisticated production that captured replays and allowed the commentators, Daniel “ddk” Kapadia and James Bardolph, to catch much of the action. They also swapped between different players’ streams live, catching in-game chatter that may be of interest to both fans and people who want to improve their in-game communication.

FACEIT’s circuit is one of the few notable Apex Legends’ events on the calendar so far this year. Be sure to tune in for Week Two on June 14.