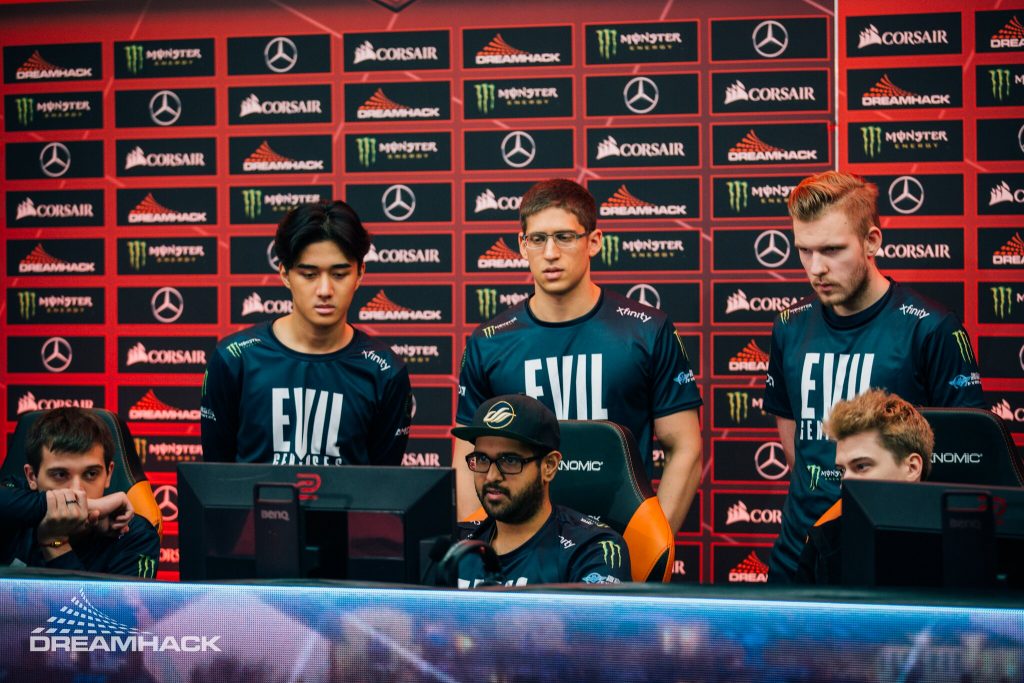 With coach BuLba and Ryoya standing in for a depleted roster, EG secured the win at ESL One Los Angeles Online. (Photo courtesy DreamHack)

Evil Geniuses have defeated Quincy Crew to become the NA champions at ESL One Los Angeles Online. In a thrilling four-game series, the team was pushed to the limit by their opponents while facing extremely adversarial conditions.

The end score of our #ESLOne LA North American League Final is 3-1 to @EvilGeniuses! A big congratulations to them on their superb win 👏

A huge shoutout to Quincy Crew for putting up a fantastic fight and showing up some great Dotes! 🙏 pic.twitter.com/vlRN9ciya7

EG was playing with two stand-ins, with a pair of their players absent because of issues related to online play and the Coronavirus pandemic. Instead, Geek Fam’s Eric “Ryoya” Dongand and Team Coach Kanishka “BuLba” Sosale stood in for Abed “Abed” Azel L. Yusop and Roman “RAMZES666” Kushnarev. What’s more, all bar Artour “Arteezy” Babaev were reportedly playing 100+ ping, with two of the team playing from a different continent.

Did you really doubt it could be anyone but us? 😈 #LIVEEVIL pic.twitter.com/rBFRJMjzhh

The 3-1 marks a return to form for an Evil Geniuses squad that has had a series of lackluster performances prior to, and during, this event. After coming within a hair’s width of winning it all at DreamLeague Season 13, the squad struggled through Dota Summit 12, and have been handed losses by almost every team in this online event.

However, before the EG could finally show that they were the NA all-stars we expected them to be, they would have to battle through the lower bracket, having dropped a game in the group stage to eventual Finals opponent’s Quincy Crew.

CR4ZY had performed relatively well in the tournament so far, but despite some long games versus EG previously, they hadn’t managed to secure a win against them yet. To remedy this, the team drafted a combination that later inspired EG in their match against Quincy Crew. The Nix Assassin and Dragon Knight combined for a two punch combo, and when both heroes had scaled thanks to an unfortunate early game from EG, CR4ZY were able to grab kills across the map.

Despite getting caught out a few times, which helped lengthen the game, CR4ZY looked dominant throughout this game. Even as the match devolved into a brutal, late-game slog, the fantastic play of CR4ZY’s cores and the precision AoE of Crystal Maiden proved too much for EG, wrapping up the first game in 44 minutes. This was a massive upset for EG, as their opponent’s simply scaled out of control, leaving them with nothing to do but attempt in vain to come back.

However, it was this match that seemed to trigger something in EG. Pushed to the limit by a team that should have been at least a tier below them, the NA stack showed no mercy in their second match. In game two, EG grabbed the lead just straight out of the gate, before rotating into the bot lane and grabbing as many kills as possible. The biggest problem for CR4ZY was the potent Shadow Demon combo, which locked them down, and after being killed on cooldown for 19 minutes, the team tapped out.

Sadly the final game would be no better for CR4ZY. Another massive snowball game from EG saw them gather a 3,000 gold lead just six minutes in. While brief moments of overextension and misplays would help lengthen the game, ultimately, this was EG’s match all the way. EG engaged mid in a decisive fight, and shortly after, the game was theirs.

Despite a messy start and finish to this series, EG headed onto the finals. Meanwhile, CR4ZY was left looking like a team with a lot to learn. This is a squad that’s still finding their footing, but luckily with a plethora of online pro Dota on the horizon, they’ll have plenty of time to develop.

It isn’t an EG final without a throw

Quincy Crew has been the one consistent team in this tournament. After winning every single series in group stages, the squad looked to wrap things up with a win over EG, and with it, take the title of the best team in NA.

However, QC made a fatal mistake almost immediately. By not picking or banning the Terrorblade, they’d let both one of the strongest heroes in the current NA meta into the game, and left it in the hands of Artour “Arteezy” Babaev.

QC tried to start fights throughout the game, but they were simply no match for the monster Terrorblade that had farmed up throughout the match. After securing a game one victory, EG had also ensured a first-round ban for Terrorblade in almost every other game in this series.

The second match was not much of a better showing for QC. Another quick scaling team composition from EG pushed their opponents to the limit. Quincy Crew’s tactic seemed to be to delay the game as much as possible so that Yawar “YawaR” Hassan could scale up on his Wraith King. Luckily for QC, Evil Geniuses were happy to oblige with some questionable plays.

However, the quick scaling of EG was just too much, with Quincy Crew falling to 0-2 in the series. The tournament was all but wrapped up, with EG just needing a single win to secure things. But, with this being Evil Geniuses, there was no way they’d let a dominant lead get in the way of throwing at least one game.

For game three, Quincy Crew immediately got off to a good start in lane, with a small farm lead to build on. What’s more, EG decided, bafflingly to give Arif “MSS” Anwar on Bristleback an almost free lane. Meanwhile, the last pick Invoker for Ryoya was backfiring horrifically. A series of bizarre miscommunications and bad team fights culminated with EG calling GG on the game.

Quincy Crew have turned up the heat! They're absolutely demolishing @EvilGeniuses in Game 3 of the #ESLOne LA North American League Final! 🔥

With momentum seemingly shifted, QC tried to take another game off EG with Pango, a strong pick who’s benefited from the recent popularity of health regen items. With a plan to have the Pango harass early, and then team fight late, QC looked to crush another quick game before their opponent’s Dragon Knight/Weaver combo came online.

Initially, this plan of early aggression worked well for QC, but as the match continued, they clearly couldn’t keep up. EG snuck an early Roshan, only for Arteezy to feed it away almost immediately. But even this couldn’t stop the scaling of the DK/Weaver, and after a sustained period of brutal high ground, sieging Quincy Crew seemed primed to break.

Despite throwing everything they could at defense attempts, it was too little too late for Quincy Crew, who fall to EG after a bitter slog against their opponents. This former Chaos EC lineup shouldn’t be too hard on themselves, though. After a solid group stage performance, they found themselves outscaled by a combo that EG had seemingly only just picked up from previous opponents CR4ZY.