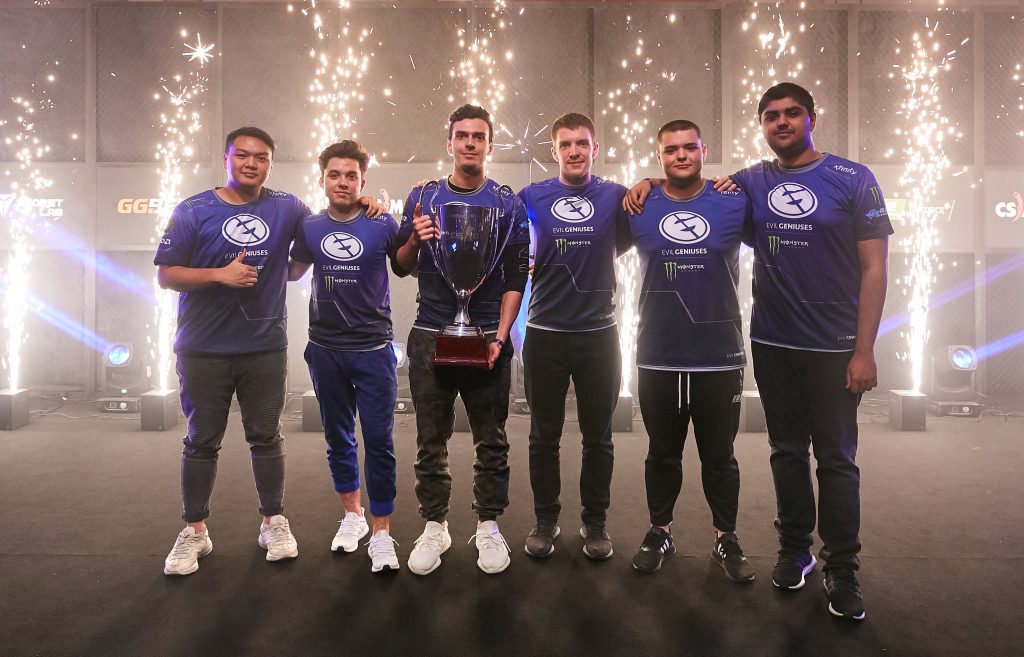 Evil Geniuses are all smiles at StarSeries & i-League Season 8. (Image via StarLadder/Credit to Igor Bezborodov)

The StarSeries & i-League Season 8 finals have come to a close. Evil Geniuses have taken first place and the US$250,000 prize. They defeated Fnatic, who earned themselves $80,000, in just two maps.

(Who says we need a crowd? 😉) pic.twitter.com/tJACCaUD1q

Despite the 2-0 scoreline, the match was not easy in the slightest. On Dust II, EG started off at a 0-9 deficit. However, they were able to rally back and end the half at a manageable 5-10. Their ensuing T side saw EG take 11 of 13 rounds, closing out at a safe 16-12.

Mirage started out shaky as well for the Geniuses. On the T side of their map pick, Fnatic went up 9-6. Previously in the winners’ finals, Fnatic’s Mirage CT side held EG to just two rounds. This time, EG had all the answers. They didn’t drop a single round in the second half, walking off 11 straight to win the tournament.

The HLTV x betway MVP award for #StarSeriesS8 goes to @The_nahtE, the first of his career! pic.twitter.com/WWH5jBw4KN

For Evil Geniuses, this event was a big step forward. This win is definitive proof that ESL One New York wasn’t just a fluke. This roster has the potential to be one of the best, if not the best in the world. The next tournament they attend will be at IEM Beijing in early November.

Despite a second-place finish, Fnatic have climbed to incredible heights in such a short amount of time. They had been slumping ever since May, struggling to even break top eight at big events. Now, they have shown that they can compete at the top again after this result and their DreamHack Malmö win.

As for the rest of the teams in the field, there are certainly two schools of thought. Renegades and FURIA should be ecstatic that they made it to top four. With how many high-profile teams attended this event, this result shows great promise for both rosters.

Speaking of those high-profile teams, G2 Esports, Team Vitality, and Natus Vincere pop up as underperformers. G2 and Vitality both failed to win a playoff series. While these teams did go through roster shuffles not too long ago, the expectation for the core of players they have is higher than just top eight, especially at an event without Team Liquid and Astralis.

Na’Vi’s result is much more difficult to pin down. They also recently revamped their roster after the retirement of long-time in-game leader Danylo “Zeus” Teslenko. However, they showed a lot of promise at Malmö, earning a top four finish. To go from that to getting dead last is a hard pill to swallow. Still, Evil Geniuses themselves underwent a similar trajectory with their last-place finish at Malmö. Na’Vi still have the benefit of the doubt for a little while longer.

With StarSeries & i-League in the rear-view mirror, it’s time to look forward. BLAST Pro Series Copenhagen begins on November 1. This six-team event will feature both Astralis and Team Liquid, as well as Na’Vi. After that, IEM Beijing begins on November 7. Astralis, Vitality, and Evil Geniuses will all be fighting for that invite to IEM Katowice 2020. The Counter-Strike circuit is heating up this winter. Be sure to check back at Hotspawn for all the latest news and coverage.