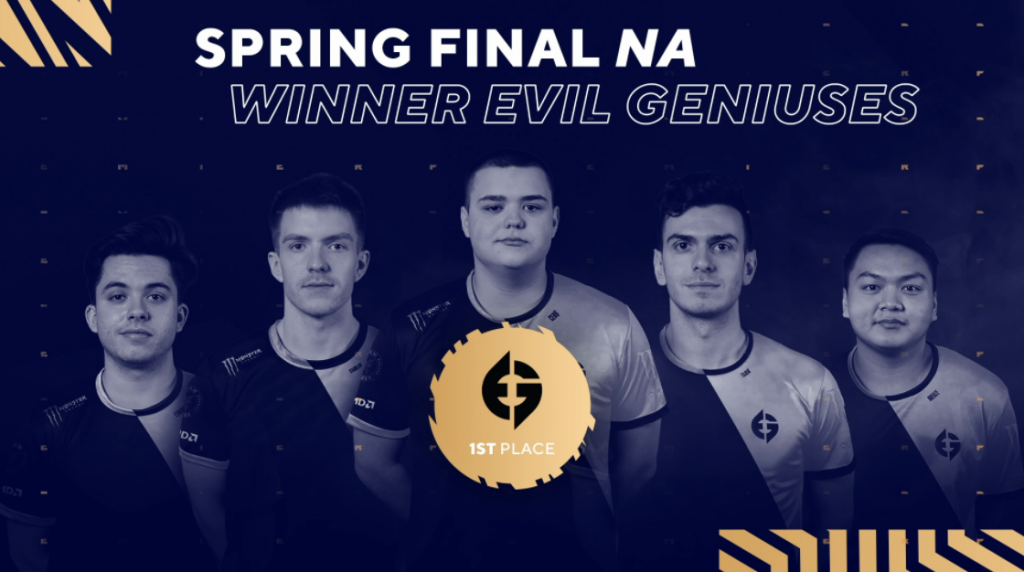 The North American side of BLAST Premier Spring Finals was an interesting tournament. The event only contained four teams with three coming from the BLAST Spring Showdown. The highest two seeds coming into Finals, FURIA and Team Liquid, were eliminated in third and fourth respectively. In the end, Evil Geniuses stood tall with wins over every other team to take their first championship in eight months.

One Close Match After Another

EG’s run at BLAST Premier Spring Finals began against Team Liquid. Liquid were the only team who qualified from the BLAST Spring Regular Season, so they had time to watch all of their opponents play in the Showdown. Despite the extra prep time, it seemed that Liquid didn’t have enough up their sleeve.

Evil Geniuses picked Nuke, but couldn’t find much success on their T side start. After finishing the half down 4-11, EG swapped to defense. Once again, Liquid had their number and quickly ended the map 16-7.

The tides would turn on Dust2, where EG put up a decent 8-7 CT half right off the bat. The real comeback started on their T side. Every member of EG earned a positive K-D ratio as they stomped through Liquid’s defense to earn an 8-1 half.

The 16-8 win brought the series to a final game on Inferno. Once again, EG’s CT side was average. They earned a 9-6 lead before swapping to the attack. Just like on Dust2, their T side is where the magic happened. They didn’t even afford Liquid a single round, taking a clean 7-0 half to end the series with a 16-6 result.

The Upper Bracket Finals saw EG face off against MiBR. The Brazilian squad had just come off of sweeping FURIA, who many saw as tournament favorites. EG’s Inferno pick was up first. Their success on the map continued as they held MiBR to a 12-3 score line. MiBR tried to come back, but couldn’t find the same level of CT dominance. Evil Geniuses took map one 16-12.

Train however, was a different story. MiBR showed why the long-range map is a favorite of theirs by taking a huge 11-4 lead from T side. The Geniuses were unprepared on their T side and were unable to take a single round, leading to a brutal 16-4 loss.

The final map would be Dust2. EG actually found tons of success right off the bat. They earned a 6-0 lead with little resistance from their opposition. Despite the deficit, MiBR weren’t ready to call it quits. They rallied together to win eight of the next nine rounds in a row and go into the half with the 8-7 lead. MiBR used that momentum to extend their lead to five on T side. EG needed a swing of their own, and they got one in the form of Ethan “Ethan” Arnold’s Desert Eagle.

Both teams fought hard for the remaining rounds, with MiBR able to win the 30th and bring the map to overtime. Once there however, it was MiBR who had the chops to close the series. A 19-16 result put the Brazilians through to Grand Finals. Interestingly, MiBR’s newest recruit in Alencar “trk” Rossato was the only player in the server to earn a positive combined K-D ratio.

Evil Geniuses now found themselves fighting FURIA for one last shot at the title. As if their previous three-map series weren’t enough, this one would be the tightest match in all of NA Finals. Both squads got their preferred map through the veto. Even so, they were incredibly close. FURIA’s Vertigo pick featured very powerful T side attacks. The Brazilian side earned 10 rounds on theirs, while EG just barely came up short with nine.

One 16-14 led into another, as the teams went to EG’s Inferno. EG jumped out to a big 6-0 start on T side. Harkening to their MiBR match, FURIA also managed to pull the half back to a manageable 7-8 score line. This time, EG would make sure to close out in regulation. When FURIA had a 14-11 lead, the Geniuses won five in a row to secure the victory.

Train would be the final map in the series. The first half ended uneventfully, as EG managed a respectable six rounds on T side. Their defense is where they would really distinguish themselves. Despite losing the second round anti-eco, EG stabilized quickly to bring the score in their favor. With six of the first nine rounds ended in bomb defuses, MiBR had the money to keep going. Still, it was EG who kept winning the clutch rounds.

In the end, it was Tsvetelin “CeRq” Dimitrov with a 1v2 clutch to secure the 16-12 finish and send EG to their rematch against MiBR.

After playing the most maps of any team at Finals, EG had to face down the team that handed them a loss just days prior. They started off by banning MiBR’s Train, forcing a Dust2 pick. EG were much more prepared for this map and it showed. Their CT side started with a 9-2 lead. Although MiBR took the last four of the half, 9-6 was still a very good start. That lead would grow quickly, as EG’s T side ran though MiBR fast and hard. A third round anti-eco ace from Vincent “Brehze” Cayonte helped the Geniuses snowball to 15-6match point very early on.

However, if there’s one thing MiBR does, it’s fight. Once they had their proper buy and setup ready, they set up an impenetrable wall. Gabriel “FalleN” Toledo hit 30 frags and 101.9 ADR with 21 AWP kills on the defense. His presence helped to bring MiBR from the brink. They were just one round away from forcing overtime, until EG finally found a single opening in the 30th. A 16-14 result told a much different story on paper, but EG had stolen MiBR’s map regardless.

Now, EG had a chance to end things on their own Inferno pick. As was usually the story at this event, EG got off to a first half lead. Their 9-6 result from T side put them in control of the map. Of course, it wouldn’t be a match against MiBR without the scrappy comeback. The Brazilians mounted their own 9-6 T side, this time with Epitacio “TACO” de Melo at the helm. His 36-20 K-D ratio and 107.9 ADR from numerous multi-kill rounds helped MiBR force overtime.

At this point, EG had played 300 total rounds at Spring Finals, while MiBR had only played 198. Even so, it was the Geniuses who looked like the fresh squad. Their resilience truly showed when they swept overtime 4-0 to end the map 19-15 and claim the BLAST Premier Spring trophy for themselves.

As previously mentioned, this is Evil Geniuses’ first title since winning StarSeries & i-League way back in October of last year. Their problem was always inconsistency, as they have the talent to create a top-level team who can fight for trophies. With this result, EG have earned $160,000 and a chance to fight for the BLAST Global Final title in January 2021.