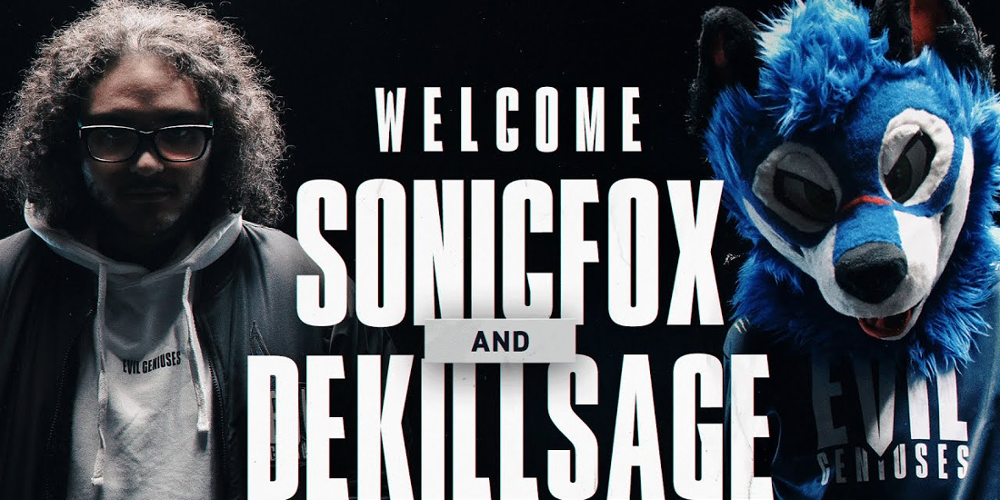 Both SonicFox and DeKillSage come to Evil Geniuses with massive FGC trophies in their cabinet. (Photo courtesy Evil Geniuses)

Dominique “SonicFox” McLean and Jon “dekillsage” Coello, players both at the top of their respective games, have been signed to Evil Geniuses in a massive pickup.

SonicFox is fresh off their win at Final Kombat, where they managed to battle back from the loser’s bracket and even make an endorsement of Democratic presidential candidate Bernie Sanders along the way. They also happen to be the most dominant all-around fighting game player of all time, ranking well above their peers on the All-Time earnings list for console players.

“Joining Evil Geniuses has enabled me to continue being true to myself, and to deliver that message to an even wider community,” Sonicfox said in a statement. “When the world’s crazy, it’s important to never lose sight of who you are, and I hope that I can speak to anyone who’s struggling and encourage them to embrace what makes them unique.”

They are also well known for being an avid supporter of Trans rights, and a beacon of hope for the LGBTQ community in the esports world. SonicFox become well known for being politically outspoken, such as during their acceptance speech at the 2018 Game Awards, where they won Esports Player of the Year.

“It’s gone past even gaming itself, people who aren’t into gaming know who I am,” they continued. “Which means my outreach is speaking to people. So, I figured, being able to be myself could change so many different lives — that speaks to me. I want to tell other people it’s okay to be themselves as well.”

Dekillsage is no slouch himself. He finished third at the Dragon Ball FighterZ World Tour Finals in February. He also had an impressive 2019, with seven top eight finishes including a gold at Thunderstruck. Several of Dekillsage’s losses actually came at the hand of SonicFox, who was his teammate at the time on Echo Fox.

“Sonic and I have been teammates for seven years so I’m excited to compete alongside them again, and this time we’re gonna overcome the best players, for sure,” Dekillsage said. “I joined Evil Geniuses because I know to accomplish some of my goals, I need strong backing, and Evil Geniuses is a really powerful team, so I think together we can make some really amazing things happen. I just really want to win a big major, that’s the last goal on my list of things to check off.

Both players became free agents in the wake of Echo Fox’s dissolution in 2019, but did not announce their status until 2020. With the signing Evil Geniuses now has SonicFox, Dekillsage, Ricki Ortiz, Christopher “NYChrisG” Gonzalez, and Kevin “PPMD” Nanney on their roster, though the latter has not been active in some time.