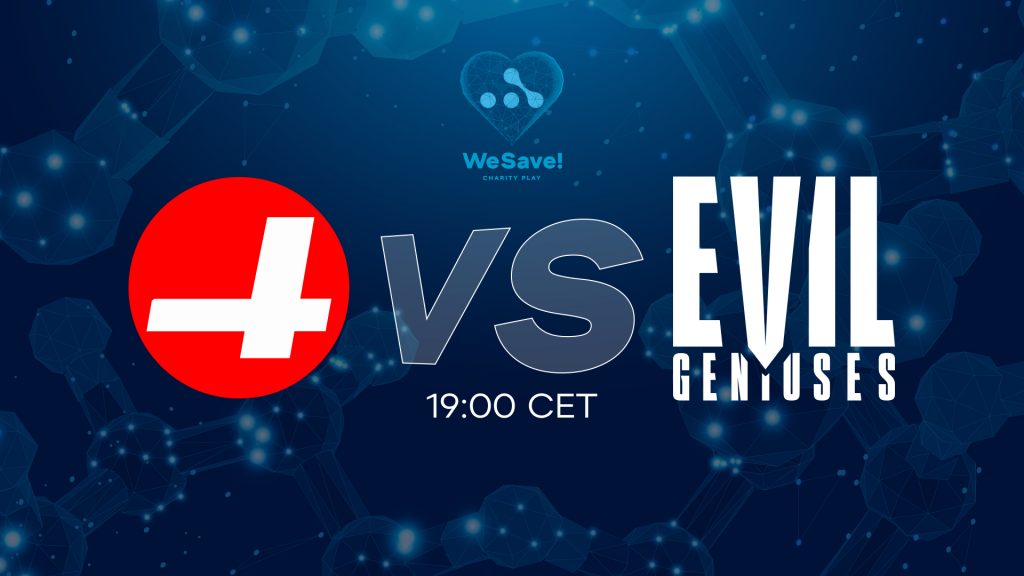 Evil Geniuses have taken the title of NA champions at WeSave! Charity Play, defeating CR4ZY 3-1. In the final matchup of day five of the tournament, the two NA teams battled it out for the $20,000 prize, which would be donated to coronavirus charities, with EG eventually picking up the win.

What an epic comeback!

In a thrilling series cast remotely by Shannon “SUNSfan” Scotten and Troels Lyngholt “syndereN” Nielsen, EG teased a patented NA-style throw but held on for the victory.

Game one EG, again playing with stand-ins Kanishka ‘Sam’ “BuLba” Sosale and Eric “Ryoya” Dong, made things simple for themselves with an Alchemist/Void Spirit combo. The win condition was manageable – Get the Alch farming, and take the win. CR4ZY would attempt to slow this down with a safe Kunkka mid pick, and a Phantom Lancer to scale to late game.

But with EG’s superior laning, CR4ZY found themselves on the back foot. What’s more, EG controlled the jungle, grabbing the superior neutral items, and grabbing a considerable lead. Taking a free Roshan, the EG took a few dominant fights and then secured game one.

For game two, CR4ZY managed to get a much stronger start to the lanes with Maurice “KheZu” Gutmann punishing Bulba for the first portion of the game. However, EG quickly rotated and attempted to shut down the Offlaner. EG’s game quickly scaled, but CR4ZY wasn’t prepared to go down without a fight. The team made themselves difficult to kill at all times, trading as much as they could.

Still, EG grabbed every Roshan they went for, and kept constant pressure on CR4ZY’s, eventually forcing their opponent’s to tap out with more of a whimper than a shout.

Before game three of the series, there was a quick break while CR4ZY ate lunch and an intermission with Rich Campbell in which the panel shared stories. But after this slight halt in the action, we were back with EG and their opponents.

Looking to wrap things up, EG picked up Chen and Wraith King, while CR4ZY went for broke, attempting to carry with the Spectre and Huskar. Things started well enough with Ryoya gifting a free first-blood to CR4ZY. But soon EG would even things up, and look to bully their respective lanes. However, CR4ZY would scale into a better pushing composition first, and use this to take towers and rotate for kills, punishing EG’s stand-in players. This would allow CR4ZY to take first Rosh, and push even harder, and ultimately they would convincingly take game three.

Trying to prevent a signature Evil Geniuses throw, the team fell back on the Alchemist. A simple win condition with clearly defined goals is often the best option for EG, but the team tempted fate with some questionable early gameplay.

But rather than allow themselves to slowly lose the game, EG was much more proactive in lanes, but this was a mistake. EG over-pushed and were caught out, and although they didn’t give up too much ground to CR4ZY, they were definitely on the losing end of most trades.

However, EG’s win condition was still online. They stalled out for as long as possible, attempting to build up enough gold for the Alch. The team even gave up Roshan, and several significant objectives just to buy time for Artour “Arteezy” Babaev to scale. Finally, after 40 minutes of stalling and cautious play, Evil Geniuses wrapped up the series 3-1.

With their victory, Evil Geniuses grab the $20,000 to donate directly to charities fighting Coronavirus. What’s more, this isn’t the last we’ll see of NA at the tournament, as on March 26th, six talents will take part in the 3v3 All-Star match, which was a stretch goal for the event. Catch that, and plenty of other Dota 2 action on WePlay! ‘s official stream.