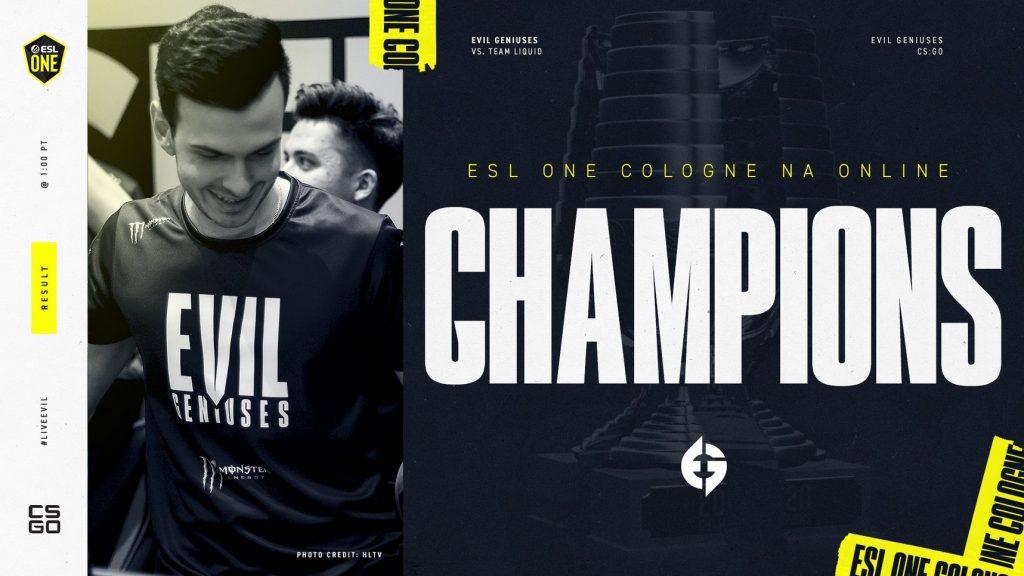 ESL One Cologne’s North American bracket has come to a close. Four teams entered the playoffs after their successful Group Stage campaigns. In the end, Evil Geniuses have earned the coveted title after defeating Team Liquid in a full five game Finals.

Semifinals came and went nearly without a trace. Both Liquid and EG won their matches with relative ease. Chaos Esports Club unfortunately couldn’t keep their level of play high enough after their surprising Group Stage run. Liquid confidently dispelled them on their Inferno pick with a well-rehearsed T side performance, taking a 10-5 lead. Jonathan “ELiGE” Jablonowski’s 4K in the second pistol helped Liquid secure the momentum and take the map 16-13.

Liquid then shut the door on Chaos on Mirage. Starting on the CT side, the boys in blue absolutely dismantled their opponents attempts at finding bomb plants. The amount of times Chaos made it to a site could be counted on one hand as Liquid took an oppressive 12-3 lead. They would quickly close out the game 16-8 to earn their spot in the Finals.

Evil Geniuses had to contend with FURIA on the other side of the bracket. Even though the Brazilian squad took second place in their group, they should have been the harder opponents on paper. However, EG made them look like amateurs all the same. FURIA tried to whip out their favored Vertigo pick and actually played a very good T side half. EG then one-upped them by going nearly flawless on their attack. Although Vincent “Brehze” Cayonte led the way in terms of kills, the entire team’s performance allowed EG to win 10 of 11 rounds and take the map 16-10.

Now on EG’s Nuke pick, FURIA fell flat early. They couldn’t stop EG from finding advantages across the map and gave up a majority of rounds to their opponent’s T side. After a 9-6 half time lead, Tarik “tarik” Celik helped to put the game on ice with a 16-5 K-D ratio and 157.6 ADR on the CT side. Another 16-10 win for EG put them through to face Team Liquid in the Finals.

Although Liquid vs EG was a full five-game match, only one map was very competitive. The rest of the series featured the teams comfortably winning their own map picks until game five. First up was Nuke, the pick of EG. This one went about as normally as a game of Nuke should. Liquid’s CT side advantage paid off early with them taking a 5-0 lead off of pistol and the initial gun rounds. Michael “Grim” Wince then pulled off the first clutch of Finals to extend the lead to six.

EG found ways to win rounds as the half drew on. They even ended with four in a row, capped off by a crucial clutch by Tarik to bring EG to six in total. The 9-6 score line was manageable for both teams going into the second half.

Liquid took a great leap forward by winning the second pistol round as well, making the score 12-6 and putting them in the driver’s seat. However, EG would not be so easily defeated on their map pick. Every player hit double digit kills in what became a masterful defensive performance. After winning nine of the 12 remaining rounds, EG had forced overtime. The momentum was firmly on their side as well. A 3K by Ethan “Ethan” Arnold on the B bombsite helped to secure the 19-16 win for EG.

With a 1-0 lead in the series, the teams headed to Liquid’s Vertigo pick. Liquid had clearly prepared for this one much more than EG, and it showed early on. Starting on the T side, ELiGE put together an absolute monster performance. His 23-7 K-D ratio and 151.9 ADR was good for a 2.63 HLTV rating. With him at the helm, Liquid took a massive 13-2 lead at the half. The deficit was too great for EG to overcome. Liquid equalized the series with a 16-9 finish.

Although EG’s Inferno pick wasn’t on the same level of dominance, they were still clearly the more prepared team. After losing a rough anti-eco in round two, EG fell to a 2-6 deficit early. Once they had their weapons however, the script flipped. The Geniuses took six of the last seven rounds in a row and earned a narrow 8-7 lead at the half. Now on the CT side, EG didn’t lose the second round anti-eco this time. With momentum from the start, EG won seven of the first eight rounds to take a 15-8 match point in the blink of an eye. Map three went to EG 16-12.

Liquid’s Mirage pick was up next. From the moment the gates dropped, it was the ELiGE show once again.

The well-executed attack of Liquid caught EG off guard numerous times. Liquid only failed to make it to a bomb site twice in the entire half. Despite that, EG still managed a workable six rounds. However, any hope they had would be stolen away once the sides swapped. ELiGE’s MVP performance continues as he earned a 29-13 K-D with 118.5 ADR. The rest of the team also chipped in to shut out EG’s attack. A perfect second half saw Liquid tie the series at two maps apiece with a 16-6 victory.

The entire series came down to Dust2, the leftover map that no one wanted to pick. Of the maps that the teams play, Dust2 was Liquid’s worst and EG’s second worst ahead of Vertigo. The match would come down to who was shooting better on this simple, aim based map. Liquid’s T side started off with a banger from Jake “Stewie2K” Yip. His pistol round clutch led to a 5-0 start for Liquid.

ELiGE and Grim looked on top of their game as they both earned 14 kills on the attack. What could have been a disastrous half for EG turned into a manageable one thanks to solid anchoring from Brehze and Ethan. Liquid’s 9-6 lead at the half left the door open for both teams. The second half started with Liquid winning their seventh pistol round of the match out of 10 in total. Their lead increased to five as Liquid took a step through the door to the title. EG’s first buy round was up next. It came down to a 2v2 which was crucially won by Ethan. If Liquid took the bonus round and grabbed AK-47s, it would have been a checkmate.

The Geniuses weren’t out of the woods just yet. With both economies on the line, tarik pulled off yet another 1v2 to break Liquid and give Evil Geniuses a lifeline.

Those clutch moments turned out to be the biggest momentum swing in the entire match. The rest of EG looked revitalized after that. Tsvetelin “CeRq” Dimitrov turned it on for what seemed like the first time in the match. Together with Ethan, the duo accounted for 30 kills in the second half. EG’s T side continued to find successful entries and fights, allowing them to run away with the match. Liquid came close to shutting them down on numerous occasions, but they just couldn’t close out any rounds. The Geniuses took 10 of the last 11 rounds in a row, earning a 16-12 victory and the ESL One Cologne trophy.

THEY ARE THE CHAMPIONS OF #ESLOne COLOGNE 2020 NORTH AMERICA 🏆 pic.twitter.com/9DwcpxIzih

After this victory, Evil Geniuses have now taken home the trophy at three big tournaments in a row. BLAST Premier Spring, cs_summit 6, and now ESL One Cologne have all been dominated by Evil Geniuses. They are without a doubt the best North American team in Counter-Strike right now. Their next test comes at ESL Pro League Season 12 in just a few days. Only time will tell if this Evil Geniuses can continue their streak.