Evil Geniuses Barely Hang On at ESL One Birmingham 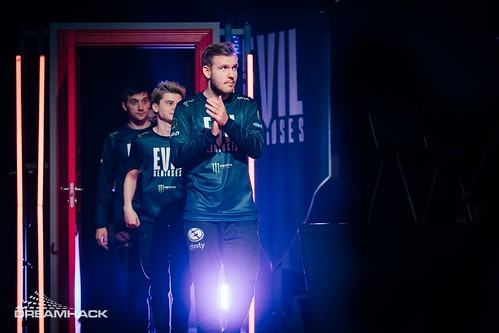 Despite a confident entry and a new look, Evil Geniuses just barely managed to stay in the event. (Photo courtesy DreamHack)

EU & CIS weren’t the only part ESL One Birmingham 2020 wrapping up its group stage Sunday. North America and South America also concluded the opening portion of the tournament on May 31st, bringing a close to a week of frantic play. Six teams from these regions have battled it out for supremacy, with two now falling to elimination, and the rest advancing to the playoffs.

Despite being a much smaller affair than its EU & CIS counterpart, the tournament has still delivered on some great games. Partially due to the seemingly leveled-up status of the US sides, and the continued struggles of Evil Geniuses.

The star of this group stage has definitely been CR4ZY. The NA stack has been absent from many of the big online tournaments in May, and the last time we saw them compete at a Major event, they struggled to an early elimination at ESL One Los Angeles 2020 Online: North America. However, after a victory at the OMG Bet Cup III, there were signs this team was on the rise.

Certainly, not the way we wished for it to happen 😐 but it is what it is – WE ARE THE CHAMPIONS 🏆 of OMG Bet Cup III! Congratz guys and here is to many more! @KheZu @MoonMeanderated @Aui_2000 @bryledota @Skiter #C4Dota2 | #DontFakeIt | #gocr4zy pic.twitter.com/JW5BvEIVaj

In this event the squad has leveled up, going a perfect 4-0 in their first five days of the event. What’s more, they’ve done so in convincing fashion putting to shame some of both region’s supposed top-dogs, and squads they’ve lost to as recently as late April. Against Thunder Predator on May 26th, the team rushed to a quick lead after opening things up with a 20 minute stomp. This was a promising start given that less than a month ago they’d lost to TP in the BTS Pro Series: Americas.

Yet, Thunder Predator struck back, catching their opponent’s off guard with incredible team fighting. Slick Earthshaker play from Frank “Frank” Arias caught out CR4ZY’s carries several times to facilitate the second game victory. In the final game it would be CR4ZY who prevailed though. After giving up a slight deficit early game, losing lanes in the process, the team fell back on Jonathan Bryle “Bryle” Santos De Gui’s Storm Spirit to lead the team, bagging the squad a final victory.

Two teams in this event have donned new logos for the first time in a major Dota 2 event. Evil Geniuses and Quincy Crew both debuted their new look in this tournament, but new duds haven’t led to better results for both these squads.

EG posted a miserable record, winning just one match directly the entire event. Their final “victory” over Thunder Predator came due to their opponent’s being unable to reconnect to the game after the series was tied up at 1-1. Against beastcoast, we saw perhaps the only genuinely good performance from the team. In two quick games, EG reminded us that in better times, this squad had reached the finals of DPC events. With Arteezy dominating on Weaver, and then Lycan, it was a glimpse of what could be. In a pair of deathless games, the carry showed why he’s, at times, been considered one of the best in the world, fast pushing his way to victory over his South American opponents.

Battlepass was soooooo yesterday. Today it's all about #ESLOne Birmingham! We're finishing up the draft and heading into our first game against Quincy Crew now! #EGWINhttps://t.co/F8iFuVXI8h pic.twitter.com/xhseaIx6b6

Yet this was only a single performance, and was rarely, if ever replicated in any of EG’s other matches. Meanwhile, Quincy Crew looked much better than their fellow NA team. After picking up three quick wins, the team only slowed down when faced with CR4ZY, the aforementioned standout of the tournament. Quinn “Quinn” Callahan and company excelled in the clash with Evil Geniuses. The team showed far more map awareness than their opponent’s in both games. The first saw Quinn’s Invoker push back his opponent’s with simple outplays, while game two was a Naga Siren snowball. In fact, despite strong early-game heroes, Evil Geniuses just couldn’t even put up a fight in lane against Quincy Crew. This is definitely a team that could advance far in the playoffs if they get a decent bracket.

The pair of South American teams in this event represent some of the most talented squads we’ve ever seen out of that region. beastcoast, of course, are the SA squad who came to prominence late last year after a series of top finishes in their events. Meanwhile Thunder Predator are a more recent highlight of the region, having made a name for themselves at the last few DPC events, and now the Online series.

Both teams started off in promising fashion, putting up respectable performances in a pair of defeats against CR4ZY. Despite woes with even getting the team ready on time, beastcoast were also able to take a win off business associates.

Tell players to be rdy 30min before the match: previous match ends 2-0 in 15 min, no one shows up, i kill myself

Relying on Jean Pierre “Chris Luck” Gonzales, the team were able to pull of two decisive wins, after his dominance of the opposing mid lane and jungle. Aided by the roaming ganks of Steven “StingeR” Vargas, the carry farmed his way to victory over the NA team.

And it's a turnaround by @beastcoast, taking this series to a Game 3!

The team also pushed Thunder Predator into last place after coming out on top in their meeting on May 30th. By cruel twist of fate, this would cause beastcoast to be eliminated in turn, as after Thunder Predator disconnected during their final match versus EG, giving EG a default 2-1 victory, beastcoast were left with the worse individual record. Both South American teams depart the tournament after a disappointing group stage.

It’s clear CR4ZY are the team to beat in this event. They’ve steamrolled their way through a string of opponents and remain undefeated. What’s more, they have just one matchup before they find themselves in the Grand Finals of this smaller-sized event. Only if the likes of Quincy Crew are able to step up to a new level of play will anyone be able to prevent this squad from taking home an easy tournament victory. Luckily, all the teams have plenty of time to prepare with a three day break between now and the winner’s bracket opener.

ESL One Birmingham 2020 Online NA & SA continues next week. You can catch all of the action, including the finals on June 7th, on ESL’s official Dota 2 Twitch Channel.