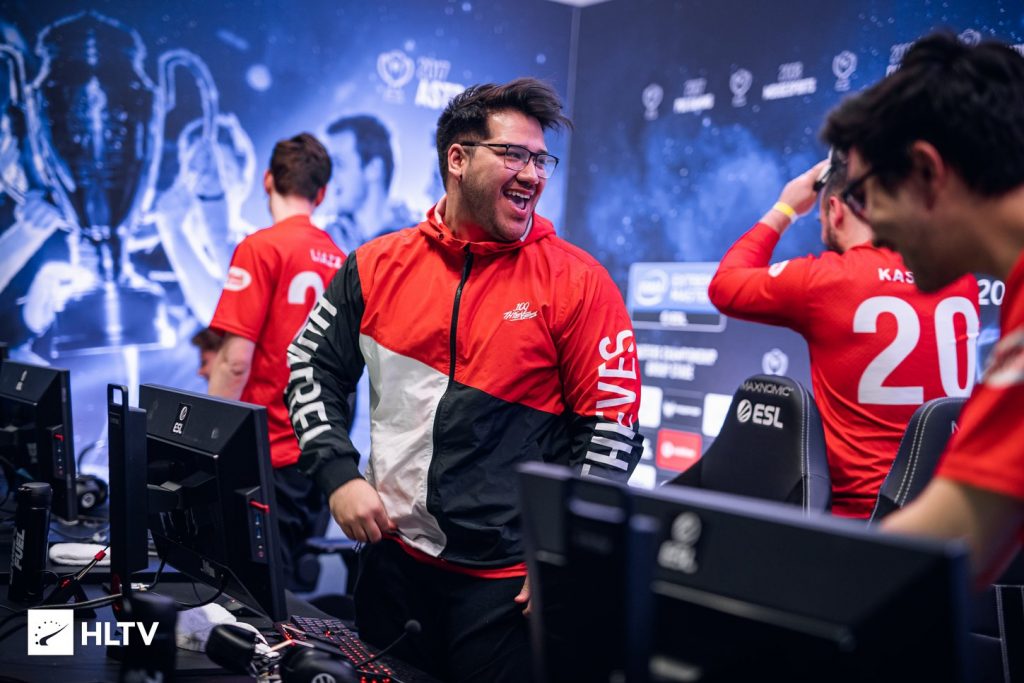 100 Thieves have earned first seed at their last event together as a team. (Photo courtesy HLTV)

North America’s final RMR event of the year, IEM New York, has concluded its group stage. The 12 hopefuls looking to earn more points towards the next eventual Major have been reduced to six. Evil Geniuses and 100 Thieves have earned first seed in their respective groups and a round one playoff bye. New England Whalers have come out of nowhere to take second seed alongside Team Liquid. Finally, FURIA Esports and Team One bring the Brazilian representation as third seeds. Of all of the playoff squads, five of them earned a 4-1 record, leaving no doubt that these are the best teams the region has to offer.

Group A – Steady Sailing to a Three-Way Tie

Group A at IEM New York was a very top heavy one. Alongside the giants of EG and FURIA were four decidedly lower ranked North American squads. The most interesting part would be seeing which one rose to take the third and final playoff spot.

Day one of play saw EG, NE Whalers, and FURIA all take 2-0 victories over Triumph, ImPerium, and Rebirth. FURIA and EG also won their next matches against Triumph and the Whalers respectively. Their next match however would likely decide who earned first seed and the all-important first round bye.

The teams prior two meetings at ESL Pro League S12 both ended with 2-0 sweeps for FURIA. The only maps played were Nuke and Inferno in those matches. This time, EG had a new pick up their sleeves. First up was FURIA’s Nuke once again. Although EG looked stronger on the map than before, they were still no match for the Brazilians. The 16-12 victory put FURIA on match point going into Overpass.

EG hoped that this map would be their trump card moving forward. That notion was shattered instantly as they went 2 for 13 on their T side. FURIA easily closed out the 16-7, giving them their third sweep vs EG in a row.

With that match out of the way, things continued as normal as the group reached its conclusion. Triumph vs NE Whalers ended up being the match that would decide on third seed. Neither squad had lost to anyone other than EG or FURIA going into the second to last day of play.

The Whalers played up to par on their Overpass pick, taking a 16-10 victory in map one. Inferno was a much longer affair. Two overtimes were needed to separate the teams. In the end, the Whalers came out on top with a 22-19 score line. Their 3-1 record going into the final day had already secured a playoff spot. However, the Whalers had more on their mind.

The last day saw FURIA take on the Whalers with their own first seed on the line. First up was the Whalers’ Mirage pick. They came out of the gate swinging, taking a whopping 11 rounds on their T side. NE Whalers were then able to close out the map 16-9, getting a firm leg up on their opponents.

Next up was Nuke, a map even EG couldn’t best FURIA on. When the Brazilian squad earned the 8-7 lead on the less favored T side then increased their lead to 14-9, the FURIA Nuke narrative looked to be inevitable. However, the Whalers pulled off an incredible seven round T side win streak to steal the map and earn the 2-0 sweep.

With this result, Group A was locked in a three-way tie at 4-1 with rock, paper, scissors head-to-head. Evil Geniuses ended up taking first seed and the playoff bye while Whalers dodged the hard side of the bracket by earning second seed. FURIA must now fight through Liquid and EG if they even want to make the grand finals.

On the other side of play, Group B was also being dominated by the usual suspects. Team Liquid opened up with a 3-0 start without dropping a map to Team One, Mythic, or Chaos Esports Club. 100 Thieves were a little rougher around the edges, dropping the series to Chaos and putting both teams on 2-1. A bit of hardship was expected as it was recently announced that 100T CS:GO would be discontinued.

Even so, the Thieves fought on with everything they had. Their fourth match of the group stage pitted them against the favorites in Liquid. Map one of Nuke would not go well for the Thieves as they gave up 11 rounds to Liquid’s T side. Liquid were then able to complete a 16-7, solidifying them as the heavy favorites against the fleeting 100T lineup.

However, 100 Thieves had much more up their sleeves. The Australian squad turned the tables on Vertigo, taking a 10-5 T side lead themselves before hitting a 16-11 return. Inferno was the tiebreaker map. Justin “jks” Savage and Jaokim “jkaem” Myrbostad led the way for the Thieves, earning a combined 51 kills and 198.4 ADR in the 27 rounds played. Another 16-11 result gave 100T the 2-1 victory and a true bid for first seed.

100 Thieves even managed to avoid the three-way tie scenario thanks to Team One taking down Chaos on the final day of play. Chaos easily took their Nuke pick 16-8 before moving to Dust2. They earned the first match point at 15-14, but were unable to close the map out. Team One then went flawless in overtime to force a third map. Mirage was skewed towards the Brazilians from the outset as they took a 10-5 T side lead. Team One completed the reverse sweep with a 16-10, putting them through to the playoffs while knocking Chaos out of the tournament.

100 Thieves’ reward for the first place finish is a direct path to the semifinals and the easier side of the bracket. Instead of having to take down FURIA and EG for a spot in the finals, that delegation falls to Liquid. All 100T needs to do is beat the winner of Whalers vs Team One and they will have a second place finish at minimum in their last tournament together. Their storybook ending could be unfolding right before our eyes.

IEM New York Online: North America continues on October 15th. The six remaining squads will be battling it out for the $60,000 prize pool, precious RMR points, and a direct invite to the IEM Global Challenge.