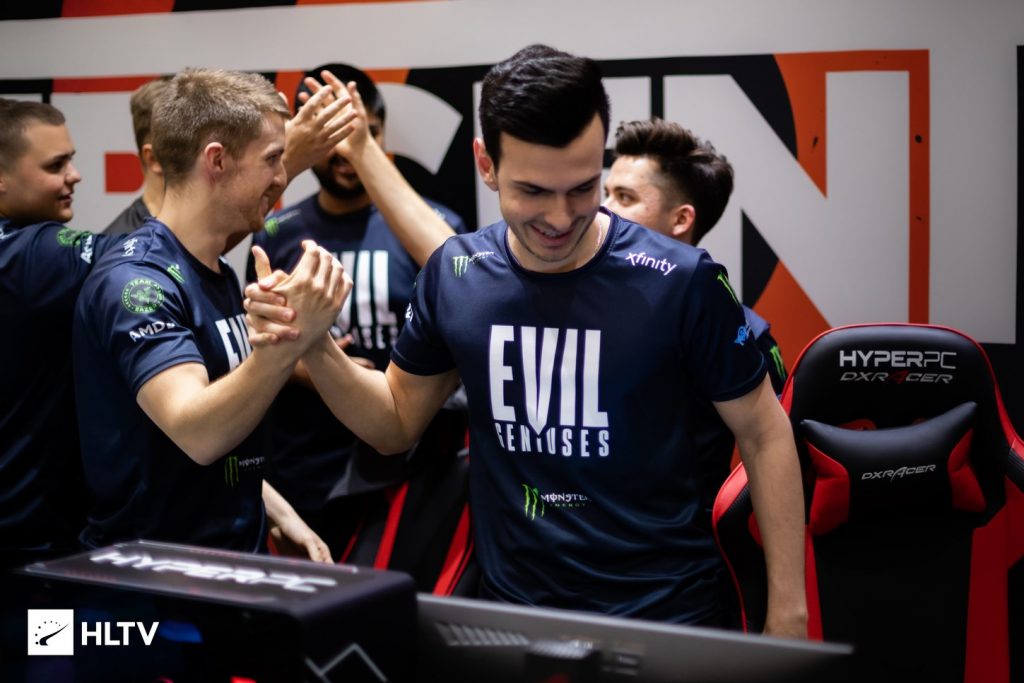 The results of the North American cs_summit 6 Group Stage have been finalized. Eight teams entered the ring, and now only four remain to fight for the max 2000 RMR points at the second RMR event in the Rio Major cycle. Evil Geniuses and 100 Thieves have won out their brackets to earn first seeds while Team Liquid and Gen.G Esports will round out the playoffs.

The Geniuses Outsmart the Competition

Group A at cs_summit 6 was way harder than Group B on paper. The three highest ranked North American region teams were fighting for just two playoffs spots. FURIA was the highest at 5th, while Liquid and EG held 11th and 9th respectively.

EG’s first match would be against the Brazilian powerhouse FURIA who have been on a tear recently. It was not an easy game for either team, as three long maps were required to determine a winner. Evil Geniuses started out by picking Nuke. They had a very good 9-6 T side, attacking the weak points of FURIA’s defense. However, FURIA were ready to one up their opposition. They started their offensive half by winning nine of the first ten rounds. With the score at 15-10, Evil Geniuses tried their best to pull for overtime. They got very close thanks to some clutch plays, but FURIA were able to close out the map 16-14 in the end.

The Geniuses now had to contend with FURIA’s Vertigo if they wanted a chance at the series. AWPer Tsvetelin “CeRq” Dimitrov would make that prospect a reality. With 16 kills on their CT half, CeRq kept Evil Geniuses competitive at a 7-8 score line. While an AWPer’s production normally suffers on the attackers’ side, CeRq saw no such drop off. He doubled his kills while only dying five times and dealing 105.7 ADR. A final HLTV rating of 1.58 helped EG to complete a 16-13 steal of Vertigo, forcing map three.

Inferno saw EG start out on CT side. A warmed up CeRq was a threat to contend with, as was a now present force in Ethan “Ethan” Arnold. With all players holding positive K-D ratios, EG took a 9-6 lead. After FURIA took the second pistol and evened up the score, it was CeRq who cracked open the B bomb site by himself to set EG on the path to victory.

EG would close out the map 16-13, taking the win over FURIA and advancing to Winners’ Finals.

Their opponents would be Liquid who were just coming off a 2-0 sweep of MiBR. In response to EG’s lost map against FURIA, Liquid attempted to pick Nuke for themselves. That plan looked alright to start out as Liquid made off with an 8-7 lead from the less favored T side. Despite the deficit, EG wouldn’t be deterred. Their own offense showed an even greater strength this time around. The score remained close, but EG were firing on all cylinders. Eventually, they overtook Liquid and closed out their map 16-13 with a frag differential of +23.

Now on Liquid’s Inferno pick, one name was on the lips of everyone watching. Usually one of the lighter fraggers on EG, Tarik “tarik” Celik was ready to take names. He earned a massive 18-6 K-D and 123.9 ADR on just the T side. That performance led to a 10-5 lead for EG. The dominance didn’t stop there, as the Geniuses then had a near perfect defense with tarik still fragging out.

Inferno would be secured by EG 16-6, granting them first seed in Group A.

Fortunately for Liquid fans, they would redeem themselves in the Decider Match against FURIA. A 16-8 on Vertigo was followed by a 16-10 on Nuke. This clean 2-0 sweep resulted in Liquid taking the final playoffs spot, forcing both strong Brazilian squads to watch from the sidelines.

In Group B, the highest rated team in 100 Thieves essentially had a buffet of mid to high tier North American squads to contend with. Their opening match against Chaos Esports Club. Chaos opened with a Nuke pick and found decent success on the T side. They earned a promising 6-0 lead, but couldn’t keep that pace up. 100T got back into the game with a nine-round streak to end their defensive half. The game was still very close after Chaos took the second pistol as well. Three rounds into the half, 100T began to run away with the game. Their mechanical prowess took center stage as the Thieves tore Chaos’s defense wide open.

100T ended the map by winning seven rounds in a row for a final score of 16-8. That momentum carried over to their Inferno pick. Starting on T side, 100T kept up the pressure and quickly racked up the rounds. A 10-5 first half put the Thieves in position to close out the match. Chaos did start their attackers’ campaign with five rounds in a row, but then 100T brought down the hammer. They won six of the final seven rounds to end the map 16-11 and complete the 2-0 sweep.

The Winners’ Match against Cloud9 was even more of a blowout. 100T took Vertigo as map one and caught C9 off guard. After an 8-7 T side half, the Thieves pulled off a perfect defensive performance. They went 8-0 in a streak that featured Justin “jks” Savage styling on the competition. He put up a 14-3 K-D ratio with an insane 190.0 ADR. This was good for a 3.12 HLTV rating.

After the 16-7 finish, the Thieves took a victory lap on Train. Jks’s heroics continued, but everyone else also got in on the fun in a 12-3 CT half.

After a short seven round second half, 100T made it official with a final score of 16-6. They had given up double digit rounds only a single time on their road to first seed.

Cloud9 would not recover from that beating in the Decider Match. Although they beat Gen.G in the opener, Gen.G were back with a vengeance. After losing Vertigo 16-5, Gen.G came back with two consecutive 16-13 victories on Inferno and Nuke. Their tenacity was good enough to book them a ticket to the playoffs.

The four team NA cs_summit 6 playoffs begin on June 30th at 6 P.M. EST with 100 Thieves versus Team Liquid. The following day plays host to Evil Geniuses versus Gen.G. While all four teams have earned a minimum of 1625 RMR points, every additional placement will put 125 more in their pockets. Every point matters for Major Legend qualification.