Everything We Know About Seraphine – League’s Starry-Eyed Songstress 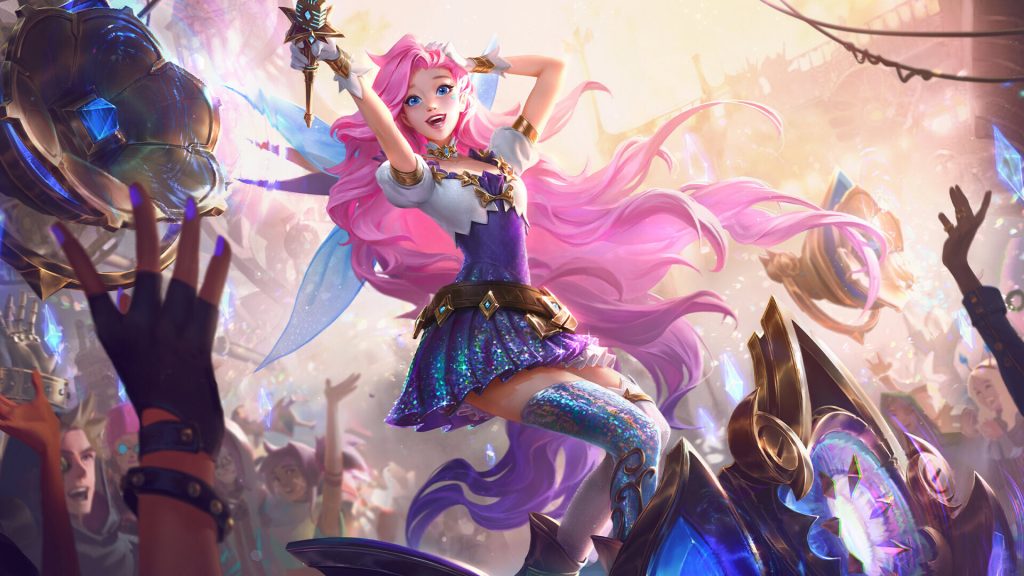 Riot Games have revealed the newest champion set to hit the rift. Seraphine has been built as a Piltovan pop star, complete with a kit that is strikingly similar to Sona. Seraphine will debut in patch 10.22.

Runeterra's premier idol is taking the stage with her magical auditory synesthesia. Captivate your enemies and sing along with your allies with this pink-haired dreamer.

Every third basic ability Seraphine casts will echo, automatically casting a second time. Additionally, whenever she casts an ability nearby an ally, she will create a Note. Each Note gives her basic attacks more attack range and deal additional magic damage, consuming the Note.

Seraphine surrounds her nearby allies in a song, granting herself and her allies movement speed and a shield. If Seraphine is already shielded, she can heal her nearby allies, restoring health based on how many allies are near her.

Seraphine unleashes a heavy soundwave, dealing magic damage to enemies in a line and slowing them. Enemies that are already slowed are rooted, and already rooted enemies are stunned.

Seraphine takes the stage, projecting a captivating force that charms enemies and deals magic damage. Any champions struck (allies included) become part of the performance, extending the range of the ability and granting allies maximum Notes.

Seraphine looks like a champion that is destined for support play. While three of her abilities and her passive do deal damage, all of these abilities have either crowd control or ally-enchanting bonuses added. While Seraphine could see solo lane play at times like Lulu, Karma, and Soraka have all seen, her primary role and function should start at support.

Seraphine’s kit offers a wealth of options, depending on the state of the game. In the laning phase, her passive Stage Presence should be great for poking down enemy laners. The extra range and damage should help her to win short, burst trades involving her Q – High Note. As the game goes on, her W – Surround Sound and E – Beat Drop will become impactful in skirmishes. Seraphine can speed her team while slowing her enemies, allowing her to control whether the fight continues or is disengaged. The crowd control on Beat Drop and R – Encore should make her a strong team fighter as well. While Seraphine may not be a main form of engage, area of effect crowd control abilities always have their place in the middle of a team fight.

Based on her kit, it seems that Seraphine will greatly benefit from cooldown reduction. Not only are her abilities loaded with utility — making it so the more casts, the more utility she can provide — Seraphine’s passive is also triggered on every third basic ability cast. So, the more abilities Seraphine casts, the more times she can proc her passive, which also will lead to more damage. Even with the added utility, Seraphine could be one of the cases where cooldown reduction will add more damage to her kit than pure ability power.

Seraphine will not be without her weaknesses. Given that her kit has such a supportive playstyle and she has access to great poke with her passive, Seraphine undoubtedly will be one of the squishier champions in the game. While she has shielding, healing, and movement speed abilities, Seraphine also lacks any kind of dash in her kit, making her more susceptible to being caught out of position. The counter to Seraphine looks to be hard engage that can crowd control her and prevent her from pumping out her abilities.

Most long-time League of Legends fans will notice Seraphine bears a remarkable resemblance to another enchanter support — Sona. Not only are both champions based around music, all of their abilities share some similarities.

The similarities start with the passives. Sona’s Power Chord allows her next basic attack to become unstoppable and deals bonus magic damage after three basic ability casts, just like the three basic ability casts in Stage Presence. Both Qs Hymn of Valor and High Note are Sona and Seraphine’s main damage abilities, dealing magic damage. Sona’s W – Aria of Perseverance heals herself and an ally, while Seraphine’s Surround Sound grants a shield or healing to herself and allies. Sona’s E – Song of Celerity gives Sona and her allies movement speed or slows an enemy’s movement speed, like Seraphine’s Beat Drop. Finally, Seraphine’s Encore looks almost exactly like Sona’s R – Crescendo, offering AoE crowd control in a line in front of Seraphine.

The similarities obviously would not have gone unnoticed by Riot Games, so they surely believe that the champions are unique enough to exist simultaneously. But at first glance, the newest champion looks a lot more like a Sona rework than something new and fresh added to the League of Legends universe.