Everything We Know About CoD: Black Ops Cold War 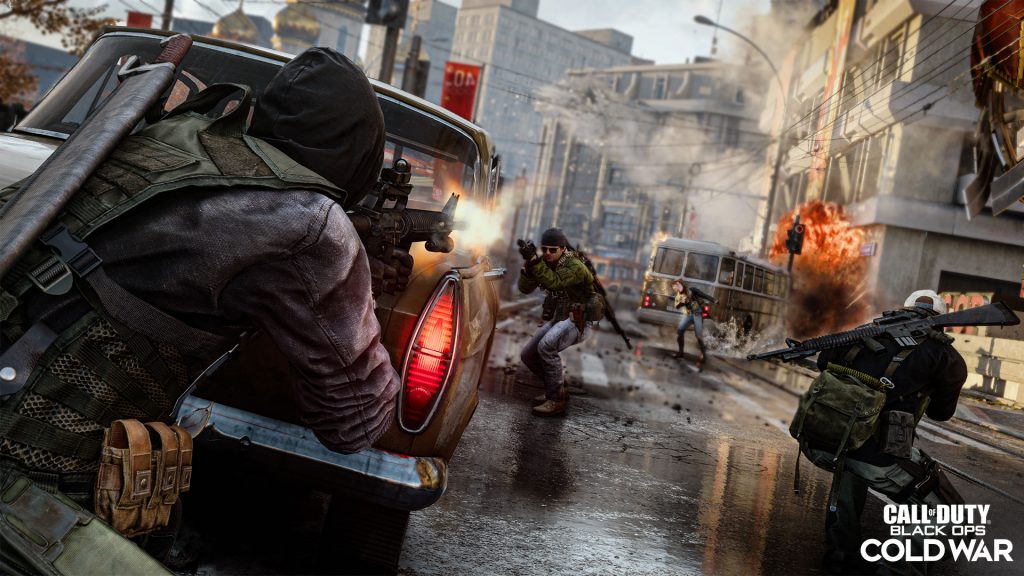 Call of Duty: Black Ops Cold War Multiplayer was officially revealed and has the entire community buzzing with excitement. The gameplay mechanics blend the best parts from previous games while also adding a fresh experience for players to enjoy. New maps and game modes add a new sense of scale and importance to the multiplayer experience, and players can enjoy the new features with almost any of their friends as Cold War is cross-play and cross-generational.

This is the next generation of Black Ops Multiplayer. #BlackOpsColdWar

Black Ops Cold War is a “boots on the ground” Call of Duty experience without any advanced movement system. Players will heal automatically, which is a departure from the manual healing featured in Black Ops 4. The game seems to feel like the first two Black Ops game in the series but has updates to provide a fresh experience.

The reveal showed various movement abilities that are standard in Call of Duty, such as sprinting, sliding, and jumping. The sprinting mechanic does appear to be slightly different than the sprinting in Call of Duty: Modern Warfare, the current game in the series.

Cold War grants a boost of speed when sprinting is activated and slows the player down to regular speed after a short period. Modern Warfare’s sprint is similar, but also has a tactical sprint option for extra speed while your weapon is held in the air. Cold War does not appear to have a tactical sprint option and will only feature the basic sprint.

Sliding will now end in a crouching position, which provides a more natural flow of movement. Footstep noise is determined by a player’s movement speed, which means walking very slow will make it hard for enemies to track your location. The Ninja Perk is also returning in Cold War, which makes it harder for enemies to hear your footsteps.

Another feature players noticed was health bars over the heads of enemy players. This feature was present in past Black Ops titles but is an optional feature. The time to kill also appears to be quick, but slightly longer than the time to kill in modern warfare. Players can jump over certain objects like in other Call of Duty titles, but it does appear to slow down speed when landing.

From the desert to the open seas, fight the battles that never happened in #BlackOpsColdWar Multiplayer. pic.twitter.com/qR6uIiFfQX

The multiplayer reveal gave players their first look at five new maps: Miami, Moscow, Satellite, Armada, and Crossroads. The maps vary in size and structure and will likely be locations featured in the Cold War campaign.

Miami takes place on the neon-lit streets of 1980’s Miami and allows players to fight in the streets of the famous city. Satellite puts players against each other as they fight over the fallen device, and Armada takes place across three ships in the middle of the ocean. Moscow lets players fight in the tight streets and interior areas of a downtown area, and Crossroads features an icy map with large exterior locations.

Fireteam is a new multiplayer mode that allows up to ten squads of four to battle in a large map over various objectives. The first mode available for Fireteam is Dirty Bomb, which requires each squad to locate uranium, deposit it into dirty bombs around the map, and detonate the explosive device. Players must then avoid toxic areas of the map while also battling other squads.

Treyarch confirmed this is not the only game mode available in Fireteam and that more will be introduced within the next few weeks.

VIP Escort is another new game mode that makes one player the VIP. These players are only equipped with a pistol, smoke grenade, and Spy Plane and will not have access to custom classes. The VIP’s team must defend the player and escort them to one of two exfiltration sites on the map. Teams win or lose if the VIP escapes, is killed, or if an entire team is eliminated.

The mission: stay alive and escape

Combined Arms Domination is another new game mode that pits players in a 12v12 battle with access to vehicles. This game mode is similar to Ground War in Modern Warfare, as players must fight for five locations.

The create-a-class system is slightly different in Cold War as it is now a “slot-based system.” Players will always have a primary, secondary, lethal, tactical, field upgrade, and perks. Previous games worked on a pick-10 system that allowed players to use more perks of attachments rather than other equipment. Wild Cards are also featured in Cold War, which adds extra bonuses such as extra attachments, equipment, or access to perks.

The Gunsmith feature introduced in Modern Warfare is also back in Cold War. Players can customize their weapons with dozens of attachments, and each gun can hold five attachments normally.

Players will keep their scorestreaks even if they die in Cold War but will receive bonuses for staying alive. However, scorestreaks will have a cooldown after each use to prevent spamming.

Warzone fans will continue to enjoy updates to the popular battle royale title. Battle pass progression will be shared between Cold War and Warzone, similar to how it currently works in Modern Warfare. The three Call of Duty developers, Treyarch, Infinity Ward, and Raven Software, will continue to bring content to Warzone.

Cold War also features cross-play, cross-generation, and cross-progression. Players can enjoy the game with their friends on almost any platform and not worry about their progress not carrying over.

Call of Duty: Black Ops Cold War offers a lot of new exciting content and traditional gameplay. Players can experience the multiplayer during the Open Beta throughout October, depending on their console. PS4 players who pre-order Cold War can enjoy the beta on October 8th. All PS4 players can try the game on October 10th-12th.

The second weekend of the beta will allow PS4, Xbox, and PC players who pre-order Black Ops Cold War to play the game early on October 15th-16th. All players on all platforms can experience the open beta on October 17th-19th.