Esports That Never Were: 4 Games That Tried but Failed 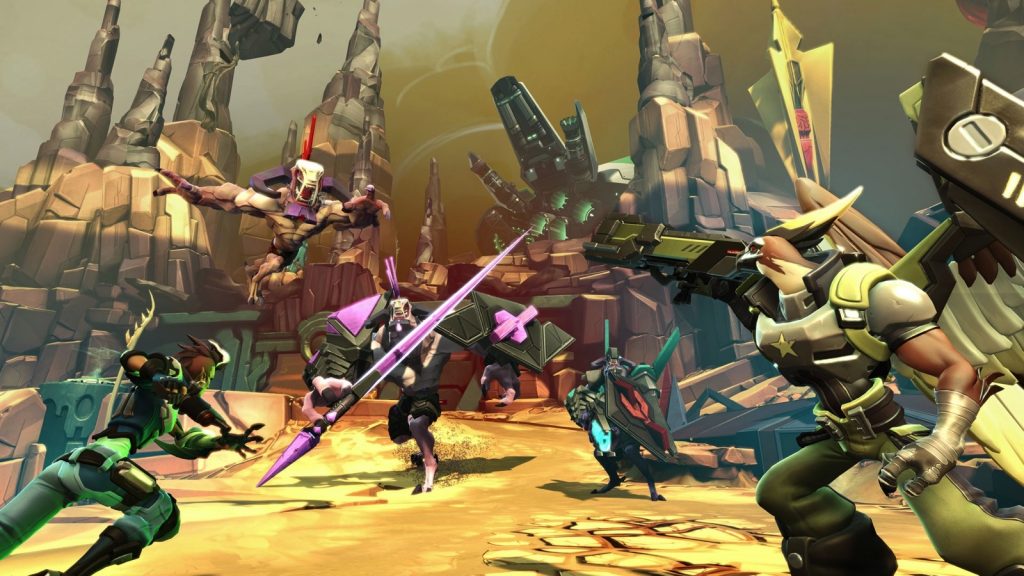 Battleborn never had a chance, releasing less than one month before behemoth Overwatch.

Not every game that tries to be a part of the ever-growing world of esports is successful. Let’s take a look at some titles that could have succeeded, but didn’t for reasons either tied to their developers, the game itself or just its release circumstances.

For those unfamiliar with it, Evolve was ultimately a DLC machine. By the time its developers figured out that fatal flaw and attempted to correct, it was too late.

At its core, I would describe Evolve as “hide and seek with monsters” or if Cabela’s Big Game Hunter had a Halloween mode. The suspense of that concept could have very well made the game into an entertaining esports, and its developers 2K and Turtle Rock thought the same.

The two worked together with ESL to host several tournaments early on in the game’s life, but its DLC situation just didn’t entice enough people to really care for the game. As Reddit user grendus put it, “it got caught in the catch 22 – nobody wants to play the game because nobody else is playing the game.”

Let’s put this beast (no pun intended) on the cutting board on the table and break it down.

The game in total had 44 items classified as DLCs which could be bought separately or in bundles and added up to a total of $74.67 if bought separately. Buying the bundles would bring you to a total cost of $60.89 which would have made it more convenient if you had the money for it.

These DLCs were simply skins and new hunters which doesn’t sound so bad right? Well, when you consider that you could get a Season Pass for $24.99 which DID NOT include any of these items, it kind of feels like a slap in the face.

The game also felt lopsided at times. You could solo queue as a Monster and by the might of Zeus find a crew of hunters who would just bag you in ten minutes and end the match. The same could happen the other way around.

It’s a very unlikely outcome that a game that relies so much on small-scale PvP can really work. Okay, think about L4D2 and how the zombies are AIs. Yes, you can predict where they will come from but they can still act in erratic ways that make the game fun and challenging.

If the big bad Monster is player controlled, they have no impetus to try and kill the hunters. As long as they lead them on a long enough chase, they can just get away and win which makes it boring for everyone else.

The devs attempted to revive what was left of Evolve with a F2P version called Evolve Stage 2 but that also failed. On September 3, 2018, they shut down the dedicated servers removed Evolve Stage 2 from Steam and even got rid of the in-game store.

Those who did purchase Evolve can still play something called “Legacy Evolve” even with the dedicated servers being shut down.

In the end, it was a combination of bad press and weird balance that killed the game and its late F2P counterpart. If the devs had put more care and attention into it, it might have turned out okay.

Let me just start off by saying that I loved this game. I thought it was fast, fun and just exciting to run around as sword-boy-ninja-man slashing and dashing people left and right.

Then I took a step back and looked at the game and that excitement kind of dropped. I think one of Lawbreakers’ biggest flaw as a hero-based action shooter was its obvious comparison to Overwatch. The character classes, the gameplay mechanics all just screamed Overwatch in your face.

The devs seemed to have realized that and tried to distance themselves a lot from the concept by marketing the game as a more “git gud” type of game compared to Overwatch’s more fun and quirky attitude.

But people played into Overwatch’s fun and quirky attitude because each character has a backstory, each character has personality. Lawbreakers’ “heroes” only differed in their abilities and nothing else. It’s like picking between the stick with a gun on it or the sharp stick. It feels dull and empty.

It also doesn’t help that the developers and the main man himself, Cliff Bleszinski, call out other games as being the reason they’re failing.

When asked about the comparison with Battleborn, another esports-hopeful game, Bleszinski said the following to Gamesindustry.biz. Keep in mind, this is a direct quote.

That, to me at least, sounds like a very backhanded reply. Instead of owning up and admitting the similarities, you decide to tell everyone who compares the games to f off, and that’s just not cool man.

Nexon also cited the reason for the game’s failure was due to PUBG “making the market environment very tough for first-person shooters in general and for LawBreakers.”

While yes, the games are both shooters, I just don’t think that they have the same audience basis.

On September 14, 2018, the servers were shut down and the game was removed from Steam.

Gearbox’s Battleborn was almost doomed to fail as soon as it launched and that reason is Overwatch. While Battlerite was very much different from Overwatch, it launched during the same month as it (albeit 23 days earlier).

The devs didn’t do much to distance themselves from Overwatch either, instead, they seemed to take the competition head-on (hint: they lost).

There’s not even that much to say about this other than the fact that Blizzard’s promotion of their game was superior to that of Gearbox’s. Combine that with the fact that they stopped development on the game a bit more than a year later and you just have a recipe for failure.

Had the developers continued to push the game, or even push the release date after Overwatch like originally planned, the game might have built a following and maybe even become an esports title. As it stands, the game went F2P in June of 2017 and has a 30 player 24-hour peak at the time of writing this.

I would say that out of all the games I talked about today, this one had the biggest potential.

Gigantic had a troubled life right from the get-go. Initially, the devs, Motiga, partnered up with Microsoft, ensuring that they could stay as an independent studio but limiting their options in terms of where the game could be published since, as we all know, Microsoft likes their games to only be on Xbox One, Windows Store or both.

Right away this meant that Motiga would be forced to miss out on the exposure opportunity that other platforms like Steam could give them.

Along the line, the deal with Microsoft went sour and Motiga turned to Perfect World Entertainment, the company most notably responsible in esports for bringing CS:GO to the Chinese market.

This limited their exposure even further as they then launched the game on PWE’s own proprietary platform: ARC.

As an esports title, it also failed in much the same fashion. The biggest killing blow was that they didn’t listen to the community’s feedback which led to people just giving up on the game and moving to something like Overwatch.

You can’t have an esports game with no audience so the game was finally discontinued on July 31, 2018.

Other
Share
Gabriel Ionica
Gabriel is an up-and-coming esports journalist with extensive experience writing for places like GAMURS, Echo Fox, Team Dignitas and more. He has an excessive love for his Corolla. Gabriel is also in a love-hate relationship with CS:GO. It's complicated.