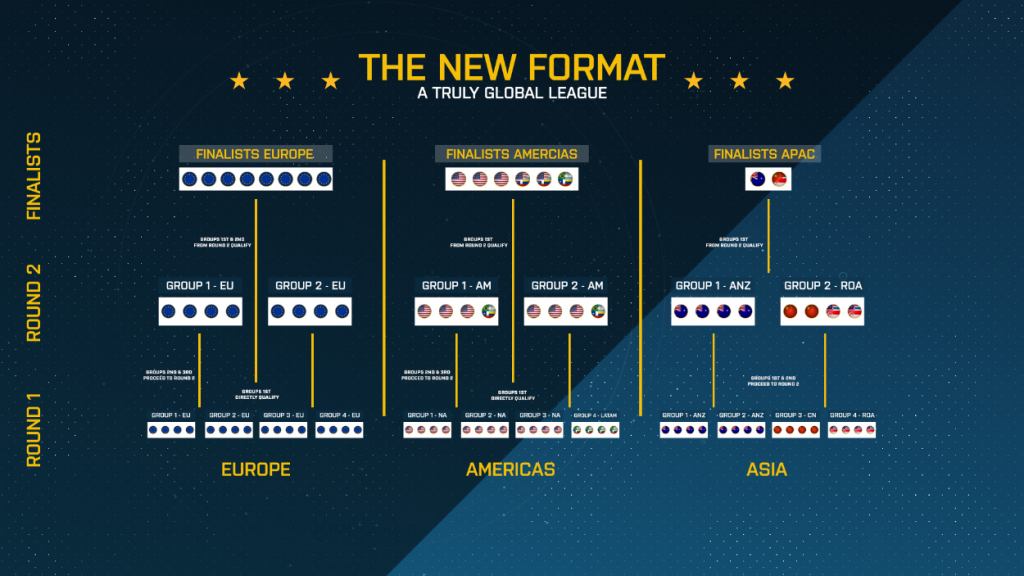 The new season will feature a new format for the League. However, each different region will feature a slightly different version. According to ESL, the change came after a discussion with the World Esports Association at ESL Cologne 2018. The old format had issues with oversaturation and was extremely time-consuming.

The sixteen teams have been split into four groups of four teams. In Europe, there will be two group rounds. Each group’s winner automatically gets a spot at the ESL Pro League Finals. The second and third teams in each group will move onto round two.

Round two will consist of two groups of four, with the group winners and second-place teams qualifying for the Final.

The League will also be played entirely on LAN, with the European Division played in the ESL Studios in the United Kingdom.

The new season will also feature Vertigo being added to the map pool. Its addition came after the CS:GO developers included the map in the Active Duty Group.

The first group consists of:

This pool is considered to be more clear-cut than the others. Mousesports are going into the league with a brand-new star-studded roster featuring the likes of Özgür “Woxic” Eker, David “Frozen” Čerňanský and Finn “Karrigan” Andersen to pair with the core of Robin “Ropz” Kool and Chris “ChrisJ” de Jong. I expect this team to win the division considering the young talent paired with the veteran in-game leader, Karrigan.

North is expected to challenge for the top spot considering their recent run of form. The team placed top eight in the recent StarSeries I-League Season 7, beating the likes of MIBR and FaZe 2-0. I expect this team to place relatively high.

Their Danish rivals, OpTic Gaming, have been inconsistent. The team has also made a change, removing René “CajunB” Borg and Jakob “JUGI” Hansen and adding Nikolaj “niko” Kristensen and Mathias “MSL” Lauridsen. Whether this makes a positive change is yet to be seen as OpTic Gaming has not played on LAN with this new lineup. Expect this team to place third or challenge North for second place.

Ex-Space Soldiers are going into the League without their super-star Ismailcan “Xantares” Dörtkardeş, who has moved to BIG. Expect this team to continue their struggles, as their last official match was in late January against North, which they lost 0-2.

The second pool consists of:

Ninjas in Pyjamas is coming from a top-eight performance at StarSeries. However, the only high tier team they managed to beat was North 2-1. Then they lost to Renegades, Natus Vincere and Fnatic. NiP is also now playing with Dennis “Dennis” Edman instead of William “Draken” Sundin, who was a temporary stand-in. Considering the caliber of teams in this group, one can expect NiP to place high.

FaZe Clan has struggled as of late. The transfer of the in-game leader Karrigan to Mousesports led to some inconsistency. Dauren “AdreN” Kystaubayev replaced Karrigan. However, because AdreN is a rifler, this meant that Nikola “NiKo” Kovač is the new in-game leader, a role to which he is not accustomed. Although NiKo’s individual performance has been stellar, his team hasn’t matched his form. They placed top 11 at StarSeries, losing to Ence, Renegades and North. On the other hand, this team is still top tier, and one can expect them to challenge NiP for the top spot.

Heroic is a team with upset potential. The recent additions of Martin “Stavn” Lund from ex-Fragsters and Benjamin “BlameF” Bremer from Epsilon has seen the team shine. However, the new roster has yet to display potential against high-caliber teams, with their only recent matches being losses to both G2 and BIG in the Dreamhack Dallas 2019 closed qualifier.

The third group consists of:

Group C is arguably the hardest pool, with Na’Vi and Fnatic being the finalists at StarSeries. It was a final that ended with Na’Vi ousting Fnatic 3-0. These teams paired with G2 and Windigo will certainly allow for extremely close matches.

Na’Vi has been performing exceptionally well, with its superstar Aleksandr “s1mple” Kostyliev, widely regarded as the best player in the world. Na’Vi have seemingly fought through their internal issues and are shining once more. One will expect this team to place high in this group.

Fnatic is also expected to place well, considering their results has been impressive. The team placed second at StarSeries, beating the likes of NRG, North, Vitality and NiP. This team should challenge Na’Vi for the top spot.

G2 has been rebuilding successfully since the exchange of François “AmaNEk” Delaunay for Alexandre “bodyy” Pianaro. The French team recently placed third at the WESG 2018 World Finals after an abysmal performance at IEM Katowice 2019 where they placed in the top 14. Expect this team to finish in third or challenge for second.

Windigo is not a team to take lightly. Bulgarian superstar Valentin “Poizon” Vasilev has been performing exceptionally well. Poizon is considered to be a new talent, with rumors the young Bulgarian might join the new Mousesports. However, Windigo managed to keep him on their roster. Due to this, I can suggest this team may challenge for third.

The fourth and final pool consists of:

The final pool contains the titans: Astralis. Arguably one of the greatest teams of all-time, the team hasn’t dropped outside of the top three at a major tournament since ESL One Cologne in 2018. They’ve also won the last two consecutive majors. It’s no surprise that this team should win this group.

BIG is another team that hasn’t looked like its former self since the removal of British Awper Owen “Smooya” Butterfield. With the addition of “Xantares” and Johannes “nex” Maget, BIG managed to place top 11 at StarSeries, only beating the likes of TYLOO and paiN, but losing to Na’Vi, NRG and Vitality. This team could contend for the second or third spot.

Ex-3DMAX hasn’t been performing well since the transfer of Audric “JaCkz” Jug and Lucas “Lucky” Chastang to G2. The team has lost to multiple amateur squads, with the most notable loss to Heroic in the GG.Bet Sydney Invitational. The team has brought in Logan “LOGAN” Corti, who played relatively well on the former LDLC lineup. Expect them to compete for the third spot, potentially losing the group.

HellRaisers is a team that is extremely difficult to predict. This is due to the team recently adding Spanish rifler Christian “LoWel” Garcia Antoran and previous Mousesports AWPer Tomáš “Oskar” Šťastný to the starting lineup. Considering its talent, the team should shine. Therefore, I believe they will place well, challenging for the second or third spot.

ESL Pro League Season 9 European Division begins on April 12 and finishes May 23. You can watch all of the games on the ESL CS:GO Twitch account. The matches are set to begin at 12:20 p.m. EDT. The first series will be North GG.Bet versus OpTic Gaming.