ESL Pro League Group C is the Battle for the Americas 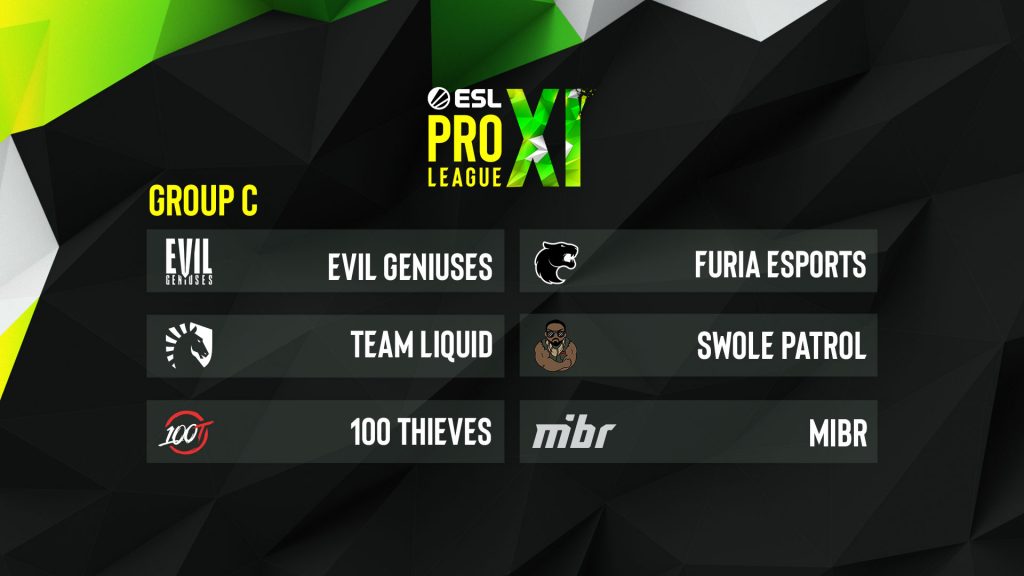 The Americas region is up for grabs in this group, as it is independent of Europe’s ESL Pro League. (Photo courtesy ESL)

ESL Pro League Season 11 continues with Group C. Since the entire event is being played online due to the coronavirus outbreak, Group C consists of only North American teams and Brazilian teams residing in NA. This being the case, there will be no true global final or further qualification. Instead, this group will crown its own “champion”.

North American Counter-Strike hasn’t been the greatest as of recent. Team Liquid just fell out of the top five for the first time since May of last year. Despite the lack of international achievement as of late, Liquid has always been strong in domestic competition. Their floor is fairly high, making it very difficult for other NA teams to contest them regularly. That said, they still have some tough opponents to watch out for in ESL.

Much like Liquid, EG have also fallen from grace on the international stage. Already this year, they’ve fallen to OG twice at BLAST Spring and exited IEM Katowice at twelfth place. EG have always had the talent to maintain a top tier CS:GO roster. The problem of inconsistency and bad preparation has been holding them back for a while. The Geniuses need to make sure they are prepared for anything that gets thrown at them.

100 Thieves Could Steal the Show

The team in Group C who has shown the most improvement lately is 100 Thieves. After a weaker showing at BLAST Spring, the Thieves pulled off a massive upset by beating mousesports to qualify for IEM Katowice playoffs. They also beat EG on their way, so they should know how to fight their group opponents. It would be a high hurdle to take first seed, but it is a possible one.

FURIA are currently the highest ranked Brazilian team in CS:GO at number 12. They had plenty of impressive performances to close out 2019, but they just haven’t been invited to any top tier events yet this year. ESL Pro League is their chance to make a break for the top. The favorites in Group C are strong, but they have also shown vulnerability. If FURIA can exploit that, they could become incredibly relevant  soon.

MiBR’s rough streak has been going for quite a while. The former top tier competitors have been bordering on competitive at multiple events. Between going winless at BLAST Spring and placing bottom four at DreamHack Anaheim, MiBR need a jolt to get going again. They recently topped their group at Flashpoint, so the start is there. A resurgence at the ESL Pro League is always possible.

The former eUnited roster is standing in as a replacement for the Renegades squad who opted to go home to Australia amidst the COVID-19 situation. As such, not much is expected out of them. Swole Patrol have not attended any high-level events in a while and their domestic success is also very limited. While upset games are always a possibility against teams who are complacent, Swole Patrol should focus on not going winless.

Since there will be no second Stage to further cull teams, Group C will see the top four seeds advance directly to a playoff bracket. Seeds one and two will play in upper bracket finals while three and four start in the lower bracket. Much like Group D, Group C has a strange schedule involving a varying amount of games per day. The key matches for Group C are:

This day two matchup has massive implications for seeding down the line. Head to head is the primary tiebreaker, meaning if EG and 100T are tied in record by the end, this matchup could decide who gets the upper bracket seed.

The Brazilian grudge match is both teams’ second game, with their first both coming against Team Liquid. The difference between an 0-2 start and a 1-1 start with tiebreaker will be crucial in determining which team will earn the final playoffs spot and which will be left behind.

The final day plays host to the expected first seed matchup. While first seed doesn’t matter in Group C compared to the EU groups, winning this match would be insurance in case anything preceding it went wrong. Pro League has been chaotic so far after all.

100T vs FURIA is a match that will have a big impact at the twilight of the group. The result of this match could spring a team into the upper bracket, or pull one out of elimination. The fate of the group, not just for 100T and FURIA, will heavily play off of this game.