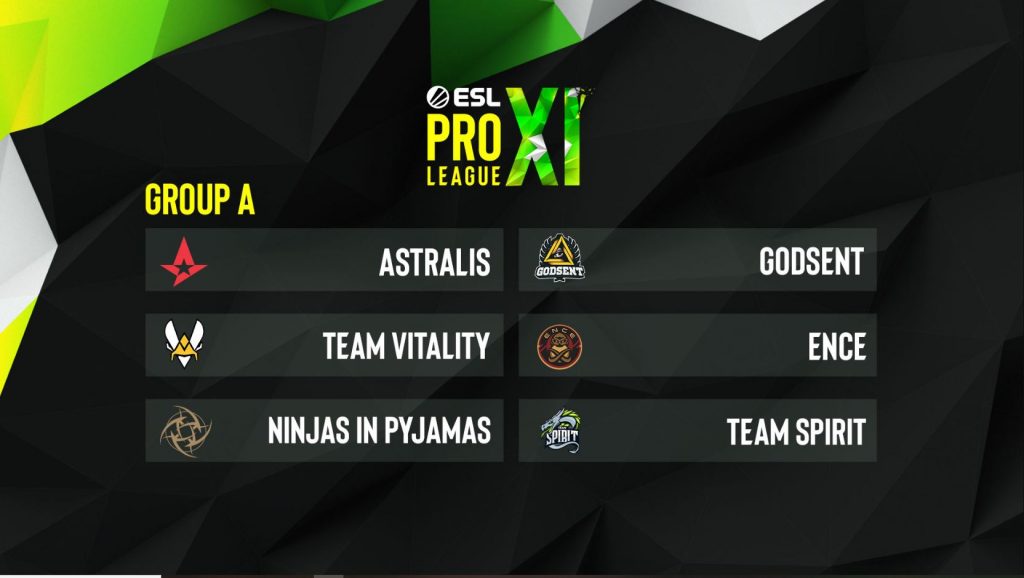 After all of the troubles that ESL Pro League has faced during the off-season, Season 11 is set to go live on Monday, March 16th. The tournament has been moved fully online and multiple teams have been replaced, but the best Counter-Strike teams in the world will still be putting on a show. Group A is first up and the top seeds are truly anyone’s to take.

The favorite to win the group has to be Astralis. In a different time, this would be a given, but their 2020 hasn’t been off to the hottest start. After a disappointing campaign at the BLAST Premier Spring Season, they exited IEM Katowice at top four. This lineup expects better. They come into ESL Pro League with something to prove, as their rank one spot was recently stolen by Na’Vi.

ENCE has been in a downward spiral for a long time now. While they did see a small resurgence late last year, they haven’t gotten higher than top eight at the mid-tier events they’ve attended in 2020.  Even so, the Finnish roster does have the potential to at least be competitive against good teams. Watch for them to contest for a top half finish.

Team Vitality have the most to lose in this group by far. On paper they are a roster who should be contesting the top of Counter-Strike. Their recent performance and BLAST and Katowice would have you think otherwise. Their in-game leader Alex “ALEX” McMeeken recently stepped down and was replaced with a young rifler in Kévin “misutaaa” Rabier. Vitality have traded structure for firepower, a move that could pay off or blow up. Besides Astralis, every team in this group is ranked below them.

The former SMASH Esports roster has been a rising force in the European scene. They haven’t truly broken into the big leagues yet, but they have shown the ability to play up to the competition. GODSENT finished top four at the ICE Challenge in February and even took a game off of Na’Vi. They could be the primary source of upsets in the group.

Ninjas in Pyjamas are one of the harder teams to gauge at Pro League. They recently did away with the last of the old guard and now field a younger roster. That roster hasn’t performed the best so far this year, their biggest achievement being qualifying for the Europe Minor. NiP are still ranked at 11th, only one place below Vitality. Whether or not they have a similar ceiling is up for debate.

Team Spirit was only recently added to ESL Pro League as a replacement team. They didn’t qualify through any normal means and they’d likely have a hard time if they tried. Spirit are by no means bad, they’re just not at the level where they can compete in S tier events. Hopefully they can put up a fight and maybe even play spoiler.

What to Watch from Group A

These six teams will be fighting for seeding in the top half of the group. The first seed advanced directly to Stage Two, while the second and third seeds must play in the decider match against other groups. The bottom three teams’ journeys will end on the spot. Every match matters in this round robin format.

This match will have big implications for advancement seeding. Losing this means needing to go perfect against every team besides Astralis. Vitality and ENCE haven’t met since DreamHack Malmo almost six months ago, so it will be a fresh slate for both teams.

This mid-table matchup might be the difference between third seed and going home. It also takes place on the middle day of play and could shift a team’s momentum for the rest of the group stage. NiP and GODSENT will be meeting for the first time.

Assuming the previous matches go reasonably, Vitality vs NiP will be the second seed deciding match. When that one placement could be the difference between playing against Fnatic or Complexity, both teams are going to want the win. Vitality recently 2-0’d this NiP lineup at Katowice, so the Swedes will need to bring a solid game plan.

First seed means a direct invite to Stage Two. If Astralis and Vitality both come into the final day with 4-0 records, everything will be on the line. Vitality’s record against Astralis isn’t the best, but they almost always play them hard. Fireworks will fly when this matchup starts to heat up, you won’t want to miss it.