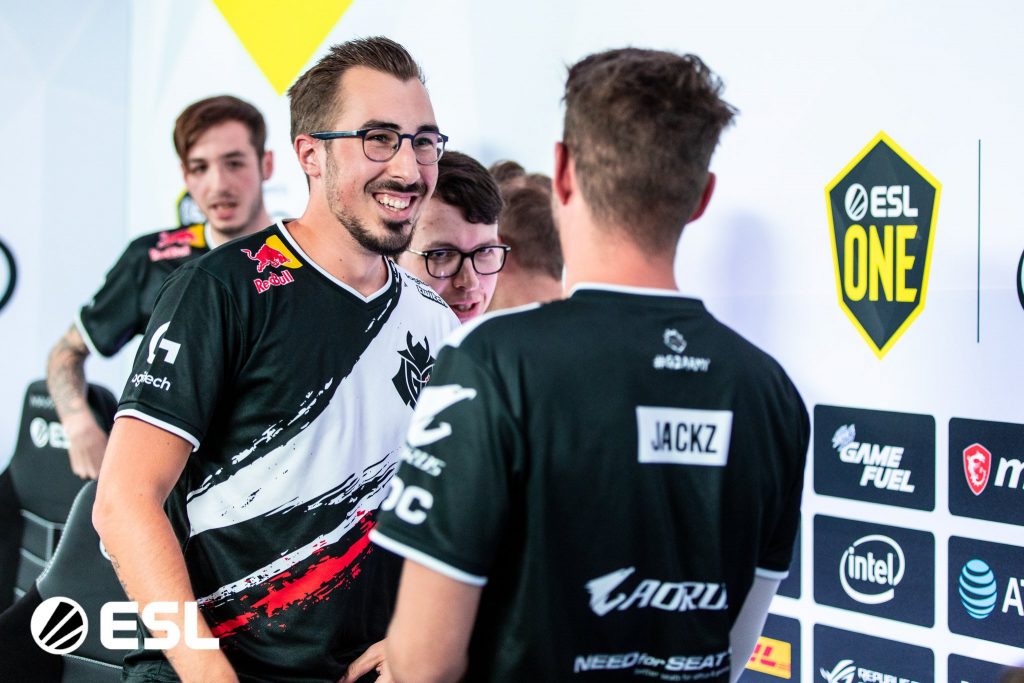 G2 Esports overcame ENCE to stay in the competition at ESL One New York 2019. (Image via ESL)

A handful of roster moves made right before the beginning of the weekend dominated most of the discussion heading into ESL One New York 2019. G2 Esports released their long-time leader Richard “shox” Papillon, eUnited picked up Ryan “freakazoid” Abadir and FaZe Clan secured Marcelo “coldzera” David. On top of the player news, Evil Geniuses officially made their CS:GO comeback by acquiring NRG’s entire roster. As some of the world’s top teams would be competing over the weekend, the table was set for an exciting beginning to the tournament and the double-elimination group stage proved that to be true.

Group A – ESL One New York kicked off with a match between the number one ranked team in the world, Team Liquid as they faced off against eUnited. Team Liquid started off shaky but ultimately overcame eUnited 16-12 on map one. They raised their level of play and took map two, 16-3. Freakazoid’s first match didn’t produce much results, and Team Liquid looked like they could get their groove back after stumbling recently with their play.

G2 Esports was coming off the release of shox, their veteran leader, but the team still managed to take down sixth-ranked ENCE. It was a spectacular double comeback to win the match 2-0 after being down 9-14 and 10-14 during the maps. Fabien “kioShiMa” Fiey was a last-minute stand-in for shox and played decently throughout.

ENCE and eUnited were dropped down to the loser’s bracket and had another chance to keep their tournament hopes alive. ENCE was able to bounce back from the G2 loss by handedly beating eUnited 2-0. Jere “sergej” Salo had some great multi-kill rounds as he helped lead ENCE to victory.

The last match for Group A would decide who would make it to the playoffs and who would have to face ENCE in the loser’s bracket for another chance. Both Team Liquid and G2 had some sloppy play throughout the match, but Liquid eventually came out on top 2-1. Liquid didn’t necessarily look like the best team in the world, and G2 needed someone to take over as their leader.

We had the bomb and the clock on our side, G2's greatest enemy 😅

A funny end but a serious result as we advance to the Semifinals on Saturday #LetsGoLiquid pic.twitter.com/Ovbj6uArch

Group B –  Astralis was coming in high off their Berlin Major showing where they took first in dominant fashion. Their first match was against OpTic Gaming. It was a hard-fought map one with Astralis coming out on top 16-14. They imposed their will on OpTic during the second match, disposing of them 16-1.

Evil Geniuses announced their comeback to Counter-Strike just hours before ESL One New York began. Their first match back was against FaZe Clan, who looked somewhat disjointed during the match. Evil Geniuses’ comeback was made even sweeter after handling FaZe quite easily for the 2-0 victory.

Group A – ENCE and G2 Esports had one more opportunity to join Team Liquid for the playoffs. This was the second time the two teams faced each other in the group stage, and it proved to be an exciting match that went the distance. G2 came out on top 2-1. G2’s Kenny “kennyS” Schrub had some clutch moments throughout the match to overcome ENCE, sending them home earlier than anticipated.

Hop ! Won 2-1 vs ENCE to make our way through to the semis #ESLOne
You don't want to be on teamspeak during these games 🤣🤣🤣
Was fun to coach once again ✌️@barclayscenter @G2esports#G2ARMY let's bring fire in there tomorrow 🔥 pic.twitter.com/tn4Z1xsWj0

Group B – OpTic Gaming bounced back against a FaZe Clan team that practically didn’t show up for the weekend. It was a 2-0 victory and was never really that close throughout. FaZe would be going home while OpTic would have one more chance at a spot in the playoffs.

Astralis played against Evil Geniuses next with the winner advancing to the playoffs without having to partake in another match. Evil Geniuses had a great match as they took down Astralis in a shocking 2-0 victory, becoming the second team to secure a spot in the playoffs.

OpTic Gaming versus Astralis was the last match of the group stage as both teams hoped to join Team Liquid, Evil Geniuses and G2 Esports in the playoffs. Astralis bounced back strong against OpTic and secured their spot with a 2-0 victory.

Heading into the Playoffs

The final four teams are set heading into the playoffs Saturday, September 28. Team Liquid will face off against Astralis while G2 Esports and Evil Geniuses battle it out. Both matches will be a best-of-three series to determine who will get a chance at the ESL One New York Grand Finals on Sunday.

The stage is set for the ESL One New York Playoffs. Team Liquid and Astralis are the first and second ranked teams in the world, G2 Esports looks clutch when it matters and Evil Geniuses hopes to make their comeback even more special by winning it all. We are in for some great CS:GO.