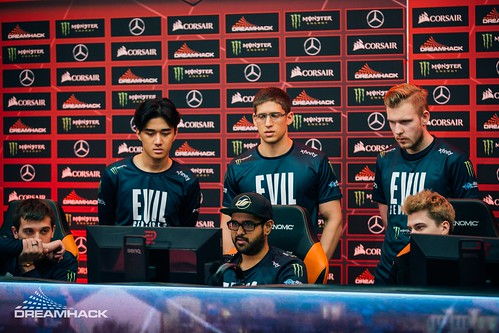 NA Dota 2 can sometimes feel like a one-horse race, especially with the talented Evil Geniuses at the helm. (Photo courtesy DreamHack)

The next Major in the Dota Pro Circuit season is slowly approaching – ESL One Los Angeles 2020. It’s the first Major held in North America since 2016 and, after the region was completely absent from the DPC last season, a welcome return to prominence.

Grab your shades and get ready for Hollywood; #ESLOne is bringing the Dota 2 Major to Los Angeles in March 2020! 🎥

However, while NA tournaments are riding high, the region’s teams are not so lucky. With two spots for the upcoming Minor and two for the Major on offer, the stacks of NA have been in a tightly fought battle for position. One team stands out as the obvious leader of the pack. But hot on their heels is at least one plucky underdog just waiting for their chance to succeed.

A Time to Shine

No one could be faulted for saying that there’s a dearth of Dota talent in North America at the moment. All evidence points to a single nexus of high-quality Dota which is, of course, Evil Geniuses. It’s possible to lose count of all the incredible accolades this organization has earned over the years. Each season, it’s less of a question of whether EG will be the best team in NA. They will be, without a doubt. The question is instead whether the team is competitive internationally.

Thankfully for NA fans, EG is riding high at the moment. A second-place finish to Team Secret at DreamLeague Season 13, as well as several good results in other tournaments, mean this is the best EG team we’ve seen since the halcyon days of 2015. While calling this team potential TI10 winners is a little premature, they’ve certainly shown the kind of ability that would warrant it.

Our Dota team pulls out the second win and qualifies for #ESLOne LA! GGs to @ChaosEC.

We're proud of the team's performance this weekend, and now they have a little bit of downtime before their bootcamp for the major next month! #LIVEEVIL pic.twitter.com/VsrESQTXKY

Built around a core of the ever-reliable Artour “Arteezy” Babaev and team captain Tal “Fly” Aizik, the team has changed it’s style a lot since the departure of Sumail “SumaiL” Hassan last year. Previously a binary team that would sink or swim depending on the performance of either Arteezy or Sumail, the squad is now much more consistent. A methodical style, mixed with a trio of carries that can step up and take advantage of any lead they’re given, makes for a potent combination.

At ESL One Los Angeles, EG will be looking to finally grab that elusive gold, and are in a position to do just that. Playing on home turf in a Major the first time in over two years, it’s EG’s time to shine. They’ll also be able to take advantage of the vast amount of domestic support they’ll likely have. The team is genuinely one of the best in the world. This Major is their chance to show they’re capable of more than just a second or third-place finish.

The quickest way to describe Chaos EC is the “best of a bad bunch.” The tier two scene in NA is questionable at best. Any team that can pull together a reasonable mix of talent would have been able to claim one of NA’s spots in this recent qualifier. That said, the players on Chaos EC have a fair amount of pedigree between them.

Yawar “YawaR” Hassan is a top-three carry in his region, and Quinn “CCnC” Callahan is a reliable mid with some great ability. What’s more, the team has one of the best minds in NA Dota in the captain’s position in Avery “SVG” Silverman. When this team gets rolling, they have the potential to be unstoppable. But it’s a form we rarely see from them, especially not in LAN events.

The big question mark for this team has been their offlane/soft support positions. After cycling through several loaned players, the team seems to have finally settled with former Ninjas in Pyjamas talent Malthe “Biver” Winther. Biver was outstanding in the team’s qualifying run, wreaking havoc with his Tiny and Tusk, and facilitating a win over fellow Major attendees EG. This is a player that excels when he has a chance to nail his opponents with layers of crowd control or bait them into a costly overextension. It’s basically a given that if he’s on Tiny, the opposing mid is going to find himself thrown and stunned under tower.

It’s this style of play that makes Biver a good fit. This is very much a team that thrives on early-game cheese, roams, and aggression. However, when the clock runs past the 25-minute mark, you can sometimes see Chaos begin to live up to their namesake. From there, it’s a coin toss whether they’ll keep things together to maintain a win or throw the game on a questionable fight. Against business associates in the qualifiers, the team was able to edge out some narrow victories in this late-game period. Against the likes of EG, they simply weren’t able to replicate that.

Our DNA is a bit chaotic

That’s going to be the key to this team’s success at ESL One Los Angeles. If they’re able to capitalize on their early game shenanigans when facing the top-tier teams, they could advance far in this tournament. If not, they’ll likely quickly fall to the lower bracket, and find themselves fighting for survival with teams far more competent in the clutch than them.

This upcoming ESL One Major is NA’s chance to flip the narrative. With home field advantage, fan support, and a lot to prove, this the time for both EG and Chaos EC to shine. The former will be hoping for an all-out win, while the latter needs to prove they’re able to compete at this level. If both teams can succeed, it will go a long way to redeeming the abysmal reputation of NA Dota.

ESL One Los Angeles 2020 kicks off March 15th, with playoffs taking place in the Shrine Auditorium in Los Angeles, California. More information about the event and tickets can be found on ESL’s official website.