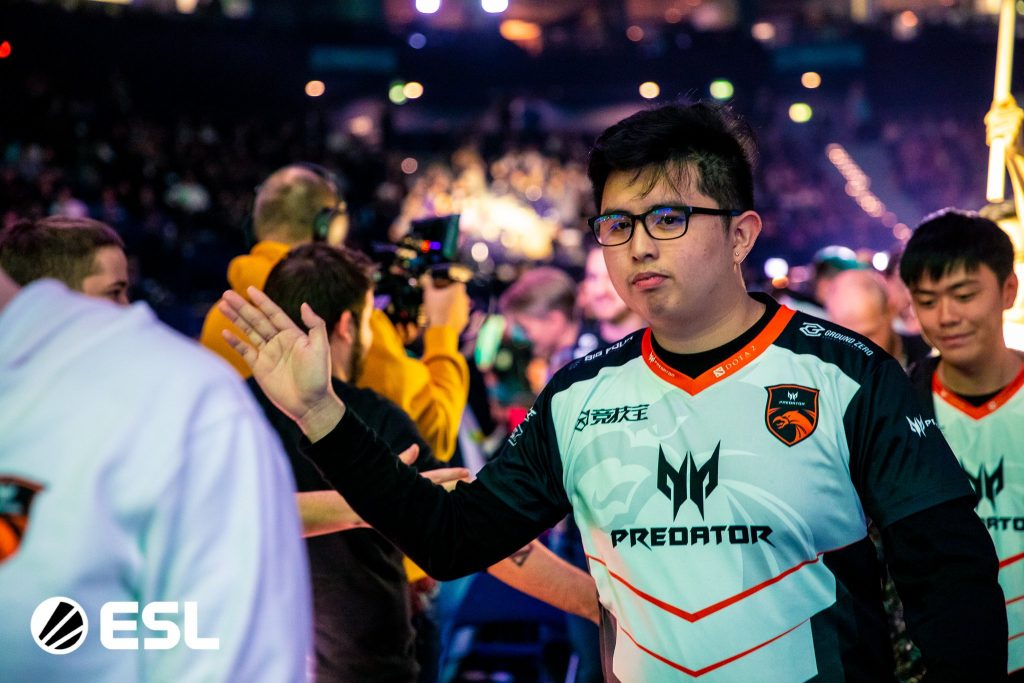 TNC Predator put up a dominant performance at ESL One Hamburg. (Image via ESL)

ESL One Hamburg 2019 is all wrapped up, and it’s been one amazing tournament. We’ve seen the favorites fall in humiliating defeats, and new top teams emerge ahead of the start of the Dota Pro Circuit season. Let’s break down all the action from the past few days of playoffs.

As the upper bracket kicked off, there was immediately a clear disparity between some of the teams. Vici Gaming, who’d looked dominant in groups, fell to Gambit Esports in a 2-0 series that showcased many of the flaws in the Chinese team’s strategies. While they were able to push get a respectable amount of farm on their carries, ultimately, their inability to siege down objectives and take high ground cost them the matches. They fell to the lower bracket to face beastcoast.

What an absolutely INSANE fight from @GambitEsports! They crush @VICI in one fell swoop to secure the series 2-0 and a place in the #ESLOne Hamburg Upper Bracket Finals!

On the opposite side of the upper bracket, Alliance came up against TNC Predator, with the SEA team in top form. Like VG, TNC had only dropped a single game in groups and were looking dominant headed into Playoffs. But unlike VG, TNC could back up their hype, demolishing Alliance, and sending them to the lower brackets.

Infamous, Team Anvorgesa or beastcoast, whatever banner this stack plays under, they out-perform expectations and give us a host of surprise upsets. In groups, they came back from a 0-2 result on their first day, only to escape groups with a 3-0-2 record after the next two days of games.

Then in the lower brackets, the team came back from a huge deficit to clutch out a win in an incredible match versus Wind and Rain. Arguably, the team should have found themselves in this position, but they still managed to overcome the hole they dug for themselves and win out in the end.

Next, beastcoast met a team they had struggled with in recent meetings, Vici Gaming. The team fell to the 2-0 at The International 2019 under the Infamous banner, and again in group stage at this very event. And as the first game wrapped up, it looked like more of the same, as beastcoast gave up the first game. But then, in the second game, beastcoast’s carries Jean Pierre “Chris Luck” Gonzales and Hector Antonio “K1” Rodriguez, stepped up, mauling VG in just over 30 minutes. And in the final of this match, Elvis “Scofield” De la Cruz Peña on the Magnus turned up big, creating so many opportunities, that Vici couldn’t help but roll over in game three. Beastcoast had broken the 2-0 curse against VG, eliminating their opponents and heading to the semi-finals.

we take the series 2-1 over @vici and are guaranteed T4 at #ESLOne Hamburg 🔥 #makewaves 🌊 pic.twitter.com/1Vjdi0nf9Y

But sadly, this is where beastcoast would hit a wall. Alliance had only really been challenged by TNC Predator, VG, and Virtus.pro this entire tournament, and had 2-0’d beastcoast in groups. And although beastcoast showed some signs that they might once again pull off the miracle comeback, as Chris Luck attempted to carry on his Lina, the South American Stack were finally an incredibly respectable fourth-place finish and taking home US$20,000.

This is what a fan brought for the signing session for them to sign.

His Cardio stress test after watching one of our games ROFL pic.twitter.com/DtbgFRmzXP

Alliance has looked like one of the teams to beat heading into this tournament. They pushed Team Liquid to their limit in the MDL Chengdu Major qualifiers at the start of the month and emerged victorious from DreamLeague Season 12 just a week ago. So it was no surprise when this team posted a seven-win group stage and flew to the upper bracket. But after falling to TNC Predator, the team locked horns with a Virtus.pro team that had decisively ended Ninjas in Pyjamas tournament run the previous day.

In the first game Alliance’s superstar carry, Nikolay “Nikobaby” Nikolov, couldn’t get things going, which was a sign of things to come. Although Alliance would clutch past Virtus.pro, and eliminate beastcoast in their next two series, the team noticeably starting to make far more mistakes. This culminated in their Lower Bracket Finals match against Gambit. Gambit had fallen to a dominant looking TNC and aimed to make it back to finals for another shot. But a first game loss seemed to spell disaster for the CIS team, as Alliance pulled ahead.

Then in the second game, Alliance finally faltered. Despite an incredibly dominant showing on his Alchemist, Nikobaby found himself shut out of the game, unable to make an impact as Gambit clutched out a speedy victory.

Looks like @GambitEsports have bounced back! They take Game 2 off of @theAllianceGG to make it an even series!

Everything comes down to this last game 😮 #ESLOne

After that awkward loss for Alliance, in the second game, both teams sped through picks and bans. Gambit chose the exact same lineup, and Alliance, stuck to it’s Magnus/Alchemist combo. With this repeat draft, we found ourselves with an eerily similar game. But with this similarity came another defeat for Alliance. Although they desperately held out, the team couldn’t stand up to Danil “gpk” Skutin’s incredible Ember Spirit play.

In the Grand Finals, TNC met Gambit for the second time, with the latter hoping for a different outcome. But Gambit seemed unable to put up a fight against a team that clearly had its number. Game one saw the third unique draft Gambit had attempted against the SEA team. But nothing seemed to be working, and TNC were pushing tier four towers by 22 minutes. This first game was a stomp, and so Gambit decided to try something that had worked against Alliance. With gpk on his Ember Spirit, the Gambit stack looked revitalized, no longer being bullied in lanes. They turned the tables on TNC and shot back with a second game victory.

With one score apiece, TNC banned away the Ember Spirit, which had dominated in game two. However, as the third match started, it seemed like Gambit was still firmly in control, picking up a host of early kills. But as TNC were backed up into their base, the Templar Assasin of Armel Paul “Armel” Tabios and Night Stalker were able to scale up and turn the tables, catching Gambit out across the map.

In a brutal 45-minute game, TNC clutched out a come-from-behind victory over Gambit. Headed into the fourth match, they looked to put away their opponent once and for all, and become the first SEA team to win it all at an ESL One tournament. However, Gambit’s team composition once again bullied TNC early, in much the same way as the second game. And with the series locked up at two apiece, we found ourselves facing a game five after Gambit picked up the win.

For the final game, gpk once again broke out the ember spirit, and attempted to carry his team. To counter him, TNC picked up Alchemist for Armel, so they’d be able to scale to late game. But as the game started, Armel looked to make the late game come early, as he farmed up a record amount in just the first 15 minutes in the game. And ultimately, this incredibly farmed Alchemist was just too much for Gambit to handle. With some fantastic aggressive play, TNC secured the win, and with it the series, and the tournament.

🏆 @TNCPredator ARE YOUR CHAMPIONS OF #ESLOne HAMBURG!

They are the first ever SEA team to win ESL One! 🇵🇭🇰🇷🇦🇺 pic.twitter.com/hP16sBMRat

It’s been an incredible event for TNC, who was only really tested in this final matchup. They rightfully depart as ESL One Hamburg champions and look poised for an impressive 2019-20 season.