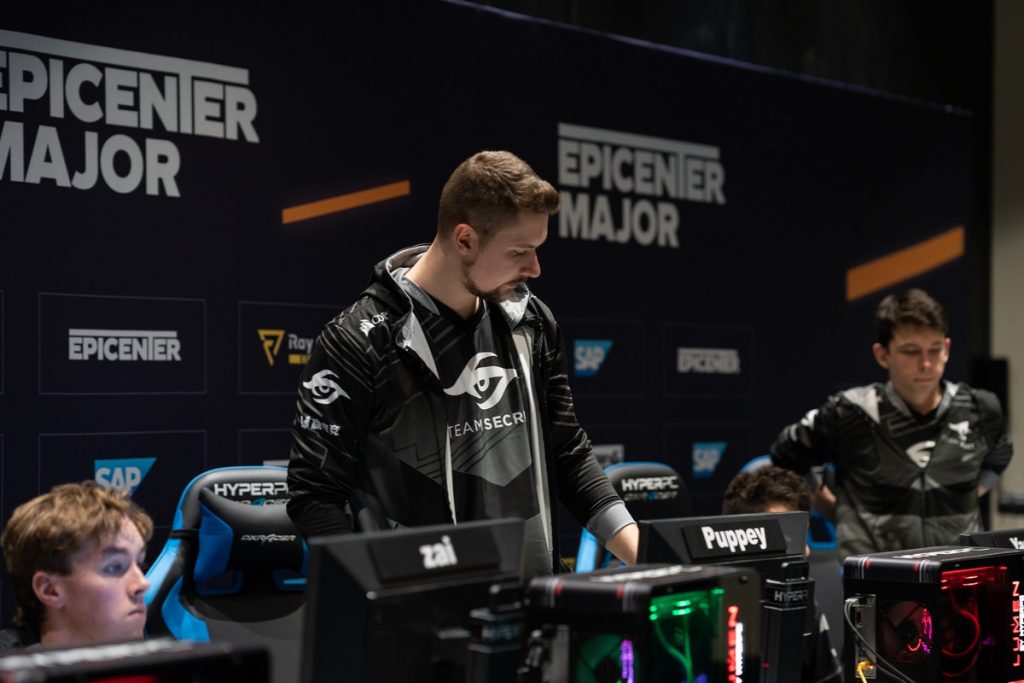 Four teams were eliminated from the EPICENTER Major, including Team Secret. (Image via EPICENTER)

The EPICENTER Major handed fans a doozy of a day. The third day of playoffs produced some shocking results.

First up, PSG.LGD met Forward Gaming in a one-sided 2-0 that ended the North American team’s hopes of a direct invitation to The International 2019. Forward will have to battle through the North America qualifiers for a single spot at TI. There’s plenty of competition in the region so they have their work cut out for them. PSG.LGD advances to face the winner of the next series…

The second series of the day was OG versus Team Secret. OG continue to compete with their coach, Titouan “Sockshka” Merloz, in place of Johan “N0tail” Sundstein. Given that Team Secret is widely considered one of, if not the best team in the world, there seemed to be little hope for OG in this match-up.

Captain Sockshka stands in for OG. (Image via EPICENTER)

Apparently, OG did not get that memo. After tight laning phases, OG got out ahead in both matches and hammered Secret through to the end. That’s right, OG 2-0’d Team Secret. With a stand-in. Is it possible that the secret to success is playing with a coach stand-in? Should N0tail be fearful of his permanent position in the roster? (Clearly not, but seriously, they 2-0’d Secret. What the heck?)

Special attention needs to be drawn to Anathan “ana” Pham’s performance, first on Slark, when he went 10/1/8 (K/D/A) and then on Juggernaut when he went 17/0/13. Ana is a beast of a carry, aggressive and living up to that “carry” label. This isn’t to say the wins today were all ana’s doing; he’s backed up by a squad of incredibly individually talented players!

With this win, OG secures their invitation to The International 2019, giving them the opportunity to defend their title.

After OG versus Team Secret, it was time for Royal Never Give Up to face Alliance. This was the closest series of the day, going to a third match. Alliance were able to pull off the 2-1 victory, securing enough points to get ahead of EHOME in the DPC rankings. That doesn’t guarantee them an invite, however.

Gambit Esports want to make their own claim on that final twelfth invitation to TI9. They were able to beat Ninjas in Pyjamas 2-0 in a shocking series. With Nikita “Daxak” Kuzmin putting in what could be a career-defining performance on Lone Druid–he had zero deaths in two games, going 2/0/16 and then 9/0/13–, Gambit fended off the Ninjas. NiP only managed two kills in the first game of the series, and while they put in a much-improved turn in the second game, winning the laning stage, they could not secure the game.

Gambit’s win puts them only 51 points behind Alliance. More importantly, the two teams face each other next, in a best-of-three elimination match. At stake is not only the placement of each team at the EPICENTER Major, but also the fate of the final invitation to The International 2019.

No EPICENTER matches are scheduled for Thursday, June 27. Matches resume from within CSKA Arena in Moscow, Russia on Friday, June 28. Tune into Twitch for all the action.