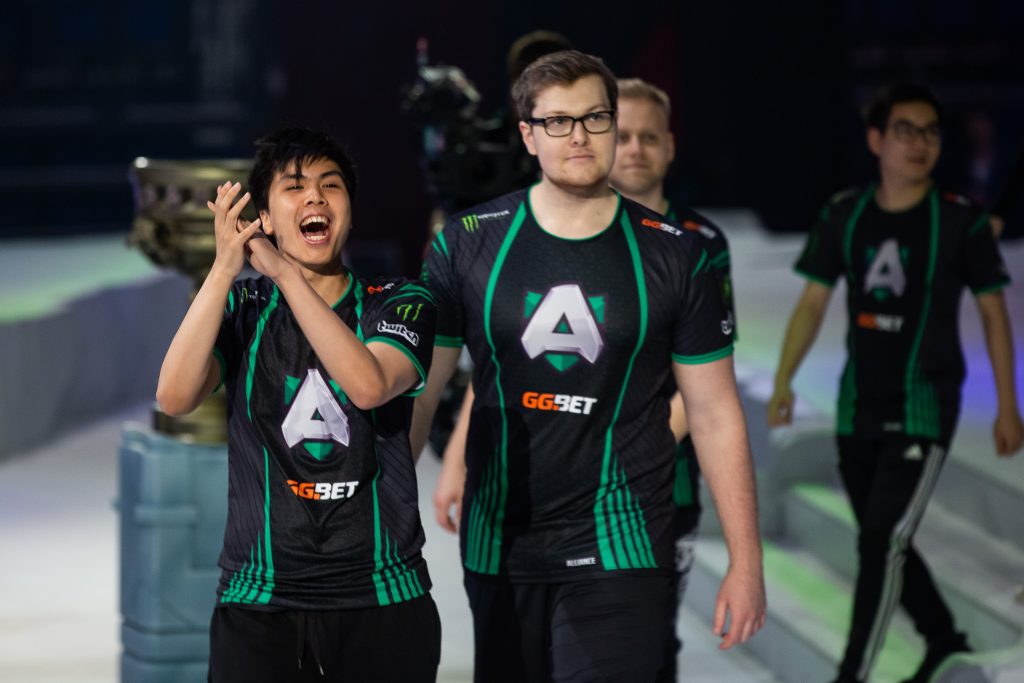 Alliance have secured their invitation to The International 2019. (Image via EPICENTER)

As the EPICENTER Major enters its final stages, we now have a complete list of all the Dota 2 teams with a guaranteed invite to The International 2019. And even as teams were eliminated, some rejoiced because their TI hopes were one step closer.

The End of the Road

OG has had a challenging tournament so far. A poor performance in an average group had sent the team to the bottom of the playoff stage. For the last week, OG’s players fought with everything they had, clutching out a spot at TI with a win over Team Secret.

But today, with their invite secured, OG weren’t the tenacious competitors we’d seen earlier this week. Facing off against the PSG.LGD team that had ensured their 0-2 start to the tournament, it was only Topias “Topson” Taavitsainen who seemed to muster enough energy to resist the Chinese team’s insatiable drive. After a final desperate engage, OG fell in the first game, unable to find an answer to Yang “Chalice” Shenyi’s dominant Tidehunter pick.

OG started out game two with a much better start, with Topson’s Shadow Demon, shooting to an early gold lead. But this wasn’t enough, as LGD stomped their opponents with comfort picks and solid map play. However, despite their elimination OG can see this tournament as nothing short of a great success, after securing their TI invite.

LGD will go on to face TNC Predator tomorrow, looking like a team that has every right to be in the finals. In terms of organizations that can reliably beat them, only Virtus.pro and fellow Chinese squad Vici Gaming remain, giving LGD a good shot a taking the whole tournament.

In what has been dubbed the “baby final” of the tournament, Gambit Esports and Alliance fought over not just a chance to advance, but the final invitation to TI 2019. But in the first game, you’d be forgiven for thinking this wasn’t much of a competition at all. Gambit looked lackluster, while Alliance had their run of the map.

In game two though, we were treated to a rollercoaster of back-and-forth fights, with Gambit desperately striking back against an Alliance team that seemed to do everything right but wasn’t able to get ahead. A risky engage 45 minutes in almost spelled doom for the Europeans.

But after a crucial bottom barracks fight, and nine buybacks to finish off game two, Gambit was eliminated. After this hour-long brawl, the victorious Alliance had secured their ticket to TI. Since their appearance at ESL One Birmingham, the team has been on a roll, and their play this tournament is no exception.

Gambit’s elimination is the latest in a series of disappointing turns for the host teams of EPICENTER. Virtus.pro has found itself struggling to maintain a top bracket position, while Gambit’s desperate run was sadly brought to a close today. Tomorrow, VP will have a chance to avenge their fellow Russians as they look to eliminate Alliance and continue their tournament.

Vici to the Finals

After two shorter 2-0 series, there was a distinct danger of a quick end to the day, as Vici Gaming faced Team Liquid in the final scheduled series. Especially after watching Vici sweep away Liquid, despite Aliwi “w33” Omar picking the Windranger that’s been so dominant this tournament.

In the second game, Liquid wasn’t going to let their carries be denied. After picking a dangerous composition, built around Ember Spirit and Visage, the team shot to an early lead. But even with Team Liquid’s initial advantage, Vici held on, partially because of low the early-game kill gold. That is until Liquid’s Warlock started to have a significant effect on fights.

Liquid’s dominance in game two meant they could push in and finish the game in just over 30 minutes, forcing the series to game three. But there Vici drafted a bold hyper-carry team, with Troll Warlord and Medusa, seemingly confident they’d be able to get both to their dominant late-game forms. And sadly for Liquid, they were right. Vici’s carries were dominant, and Liquid had nothing to answer them.

With their loss today, Team Liquid falls to the lower bracket, awaiting the winners of tomorrow’s matches. Vici has secured its place in the finals, and regardless of whether they face Liquid again, or a new opponent, the team looks like a scary contender, and surely already a favorite to win TI 2019.