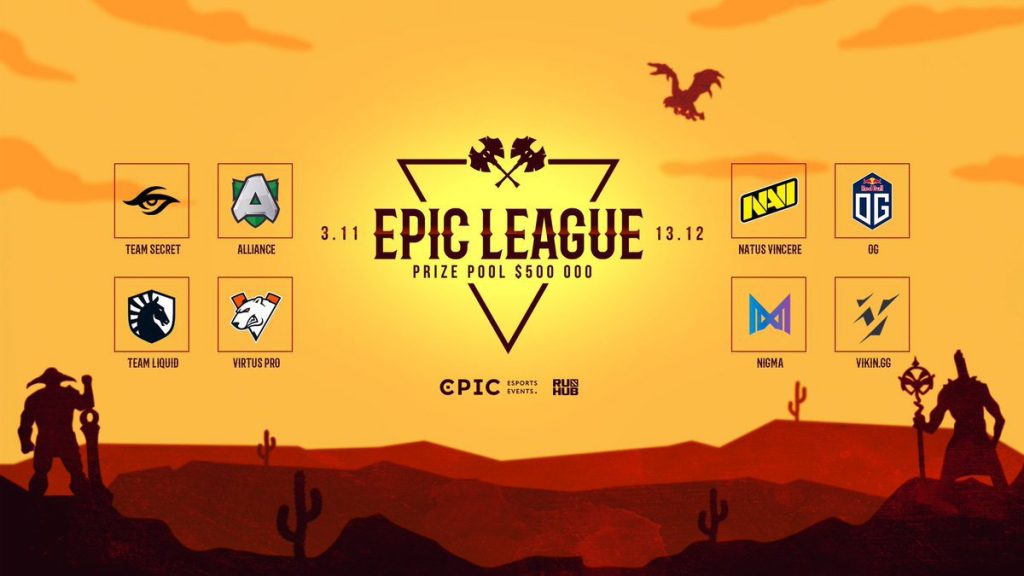 TI10 may not have happened this year, but 2020's winter Dota 2 season will stop for nothing. (Photo courtesy Epic Events)

Russian Dota 2 event organizer Epic Esports Events is not done pumping out tournaments just yet. The company most known for their popular EPICENTER tournament series as well as the OMEGA League announced the Epic League early on Tuesday, via a tweet on their official Twitter account.

Today we are happy to announce the Epic League tournament by Epic Esports Events!

A legendary battle awaits us! 🔥

The event itself is scheduled to begin on November 3rd, and will feature eight invited teams from the Europe and CIS regions. Marquee squads like Natus Vincere, Team Nigma, Virtus.pro, and of course the ever-dominant Team Secret will play online for their share of the $500,000 prize pool until December 13th. The tournament seems to be invite-only, as there are no qualifier slots present in the announcement graphics at all.

Virtus.pro in particular will be interesting to watch throughout the 40 days of play, considering that their roster went inactive at the end of September this year due to poor results. It isn’t clear whether or not their inactive lineup will be reactivated for this tournament, or if their junior squad VP.Prodigy will be representing the A-team in this case.

Details on the event’s exact format, match schedule, and prize pool distribution are sparse as of the time of writing — but the particulars aside we can certainly anticipate the clean and slick production quality that Epic Esports Events have been known for since the first EPICENTER in 2016. The schedule itself also leaves room for some unpredictable games, as Valve mentioned this month that two new heroes are slated for release by the end of November.

Given that Valve does not enforce the use of older patches in official competitions, it is entirely possible for one of the teams participating in the Epic League to discover a broken strategy or build with these new heroes — if they are indeed released in time. On the flipside, Valve could also simply disable them in Captains Mode ahead of time, as they have done with other new heroes in the past.

Regardless, the winter season should be scintillating as more Dota 2 events cover the final months of this cursed year. Or Team Secret could just destroy everyone as they are wont to do lately.