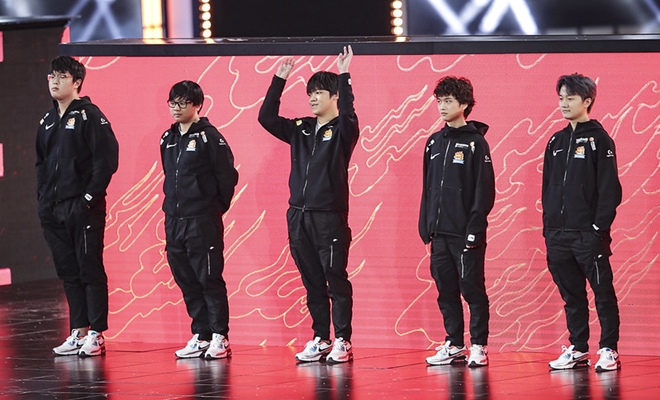 The LPL made history at Worlds this year by having a team representing in every possible stage of the tournament. (Photo courtesy Riot Games)

China’s League of Legends Pro League has established itself as the world’s most dominant region over the past two years after winning both the 2018 and 2019 World Championships back to back. This year, Damwon Gaming denied Suning Gaming’ a shot at extending the LPL’s reign over the competitive League of Legends scene.

The LPL sent four teams to Worlds this year, with each one placing at a different stage in the tournament: first seed TOP Esports, second seed JD Gaming, third seed Suning Gaming, and fourth seed LGD Gaming. Even simply reaching the finals is an achievement any region can be proud of, but let’s take a look at the wider picture surrounding the LPL’s performance this Worlds. 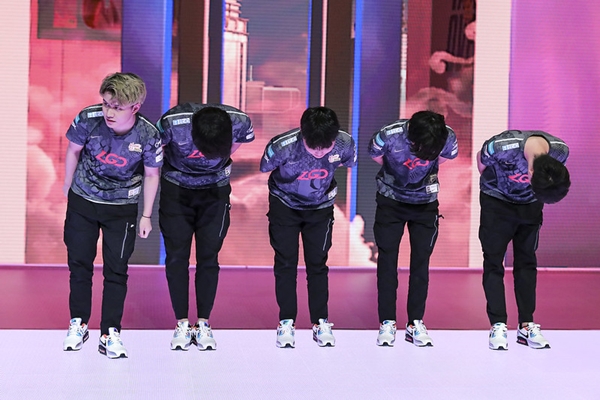 When LGD qualified for the 2015 World Championship as the LPL’s first seed, they failed to escape groups despite being considered one of the tournament favorites and placed third in their group right above TSM. There were a few extra steps required along the way, but groups played out exactly the same for the org this year (even down to TSM placing last in their group).

Okay, so 2020’s LGD and 2015’s LGD aren’t even remotely similar orgs, but it’s safe to say that LGD tragically failed to live up to expectations. LGD qualified as the LPL’s fourth seed after a wild best-of-five series against former world champs Invictus Gaming.

Although they qualified as the region’s lowest seed, expectations were just as high. LGD was not only projected to clean sweep the Play-In Stage, but they were also expected to slot into an evenly-matched group that they could advance from if they played well. They did not.

LGD flounder through the Play-In Group Stage, and only really found their footing in the knockout stage. The most glaring issue they faced was their inability to set up winning plays around objectives and use the momentum to close out games. This lead to them fumbling leads and showing some uncharacteristically disjointed teamplay. Lucky for them, the opposition in their group was playing just as chaotically; they actually almost made it out.

It’s no surprise that LGD couldn’t patch up all of their issues from Play-Ins in time for the main event. Their overall gameplay was good enough to earn one win off of each team in the group, but that’s about it. 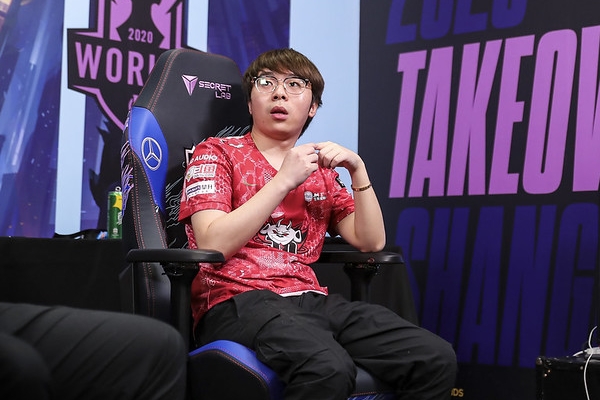 JDG was one of the few teams at Worlds that proved to be capable of beating Damwon Gaming. (Photo courtesy Riot Games)

After being placed in a group with Damwon, the pressure was on for JDG to match up against the Korean hopefuls and test their mettle. They delivered for the most part and finished second in the group, but would eventually be knocked out in the quarterfinals by Suning.

Meeting another team from the same region at the very beginning of the bracket stage might not be ideal, but Suning was probably the best possible draw for JDG. Support Zuo “LvMao” Ming-Hao and top laner Zhang “Zoom” Xing-Ran were standout players for the team that could match Suning’s Hu “SwordArt” Shuo-Chieh and Chen “Bin”  Ze-Bin, while the star mid-jungle duo of Zeng “Yagao” Qi and Seo ”Kanavi” Jin-hyeok ran wild. Somehow, though, the 3-1 loss against Suning didn’t come as a surprise to most.

The reason for that was because of Kanavi’s underperformance throughout Worlds. The meta dictated that junglers would drive the pace of the game, and as carry champions like Graves and Nidalee rose to priority, all projections for JDG to make waves at Worlds were made with the expectation that Kanavi would thrive in a meta so clearly aligned with his strengths as a jungler. Unfortunately for the former MVP, it just wasn’t his tournament.

With Kanavi struggling, it’s only natural that Yagao would look worse. Jungle-mid synergy is so crucial, especially in a meta where the jungler is rewarded for playing aggressively and mid would need to look to shove in waves and play around jungle pathing. You can’t really do much as a team about a player having a bad tournament. Of course, one player isn’t responsible for an entire team’s shortcomings, and part of being a unit is being able to compensate for a teammate’s performance when they’re struggling.

It’s important to keep in mind that this was also Kanavi’s first Worlds appearance and he was expected to pop off and carry the team. JDG simply had an unlucky tournament hampered by harsh backlash from fans for their play, and under different circumstances and bracket draws, they may have been able to advance past top eight.

SO CLOSE TO THE TOP 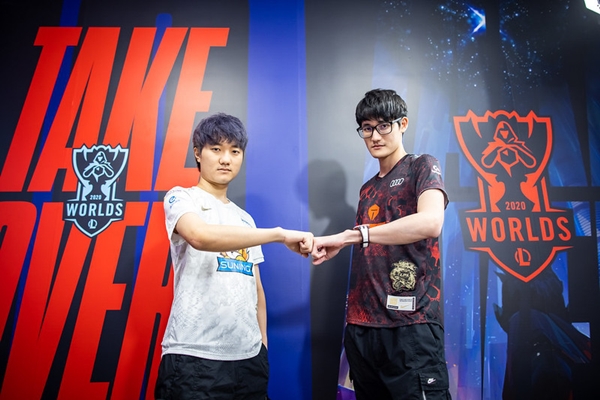 After a close reverse sweep against Fnatic in quarterfinals, TES went from being tournament favorites to underdogs against Suning Gaming. (Photo courtesy Riot Games)

Between TES and DWG, most analysts predicted at least one of these teams to advance to the finals and win it all. With how the bracket shaped out , placing both teams on opposite ends, the two seemed destined to meet in finals. TES’ journey at Worlds was cut short in the semifinals, however, and it’s easy to see why when taking a look at how they got there.

TES were kind of like a brick wall in the LPL during 2020 Summer due to their airtight teamplay and stellar individual performers. Before the knockout stage, this narrative held true for TES, but their group was incredibly top-heavy with them being a clear tier above their opposition.

It seems that TES’ biggest shortcoming during Worlds was that they weren’t as flexible in draft as some of the other top four teams, DWG, SNG, and G2 Esports, and in groups, they didn’t really need to be. Comparatively, they were fairly underwhelming compared to those teams, even though they put on some great performances as a team. Zhuo “knight”  Ding, for example, was the most hyped mid laner of the entire tournament, and rated the best in his role by many. Despite playing pretty cleanly in groups, many people were disappointed with his performance because he didn’t have many pop off moments, but the mid-jungle duos he faced in groups weren’t nearly as tight-knit as he and Hung “Karsa” Hao-Hsuan were.

Fnatic pushed TES to five games in the quarterfinals, and was able to handedly expose their bot lane, one of the team’s strong points. After struggling to overcome the match against FNC, which should’ve been an easy call, it makes sense that they eventually fell to Suning, a team that was noticeably improving with each match they played.

Maybe TES would’ve found more success in the bracket stage if they’d opted into more aggressive picks for their solo laners. On paper, knight and top laner Bai “369” Jia-Hao outclassed every solo laner on that side of the bracket.

TES’ performance at Worlds can be considered a disappointment because while they showed glimpses of how great we’d expected them to be, a fairly clear path to finals was laid out for them and they weren’t able to see it through. 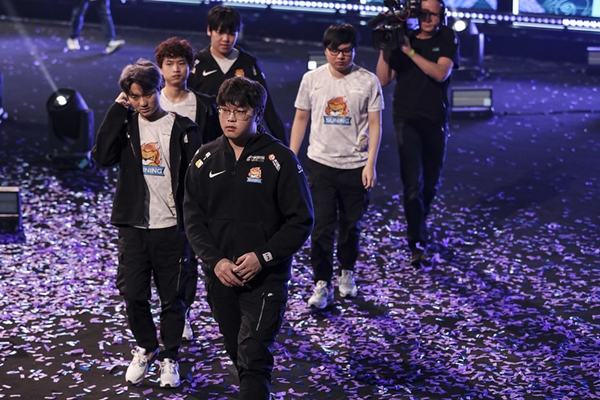 SwordArt, Suning’s most veteran player, attended because a finalist for the first time in is eight-year long career at Worlds 2020. (Photo courtesy Riot Games)

The award for best LPL team at Worlds obviously goes to the team that reached the finals, Suning Gaming.

All eyes were on TES to carry the Summoners’ Cup back home to the LPL. While some considered Suning to be a dark horse in the tournament that could make a splash, the general consensus was that this was a team that was “good, but not great.” After an action-packed performance in groups that earned them first place over G2, it was clear that Suning was ready to defy our expectations.

This is a team that demanded people’s attention throughout Worlds through both their play and the stories behind their players. Tang “huanfeng” Huan-Feng was a rookie with an inspiring story that proved himself as one of the best ADCs at Worlds, period. Lê “SofM” Quang Duy, a unique jungler known for never shying away from a fight and the honorary last hope of Vietnam after the region was unable to attend Worlds due to COVID-19 complications. SwordArt, a Flash Wolves veteran who finally achieved his dream of reaching World finals, knocking out his former teammate Karsa in the process. It’s as if it was written in the stars for this team to win it all.

Suning’s run ended with a 3-1 loss against Damwon, but that result doesn’t take away from the most impressive thing about this team: their ability to learn from their opponents and apply that knowledge to their own gameplay. Suning didn’t reach the finals because they were always the second best team at Worlds, they reached finals because out of all of the teams, they took the most advantage of their stage games and practice and were able to improve rapidly. They went from underdogs to favorites in the same tournament.

Regardless of any impending roster changes, Suning can return to the LPL this coming Spring knowing that their players achieved something great and are possibly capable of even more.

IS THE AGE OF THE LPL OVER?

Does a failure to win a third championship in a row spell the end of an era for the LPL? Definitely not. China entered Worlds with one expectation:” to win it all. They fell short of that goal, but not necessarily because of a weakness or gaping hole in the teams’ approaches to the game. Damwon were just that good.

Rather than hitting the reset button and changing too many things around, LPL teams should instead continue to refine their own unique styles as they always have. That creative edge over their opponents and willingness to take risks has defined Chinese teams for years, and was a major factor in why IG and FunPlus Phoenix were able to win in the fashion that they did over the past two years.

These teams could likely be just as stronger or even stronger if they stay together for the 2021 season, but as the game will have changed drastically in Season 11, we can only hope that the LPL continues walking to the beat of its own drum.