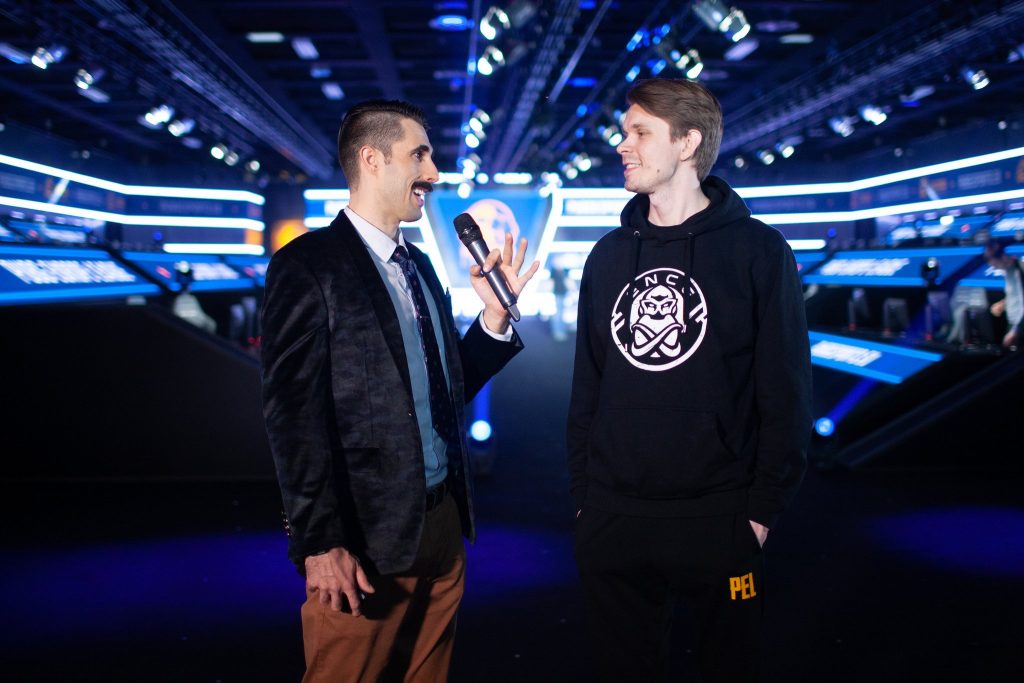 Moustache Dave interviews Skuijke, a member of ENCE, who are currently in first in PEL. (Photo courtesy of @PEL_esports/Twitter)

This week’s action in the PUBG Europe League (PEL) is the midway point of the inaugural phase. It was incredibly open—suggesting the breadth of talent is wider in Europe than in North America’s National PUBG League. Though teams like Raise Your Edge managed to claim three chicken dinners in Week Two, there were 20 matches, and plenty of teams found a victory throughout.

Team SoloMid was the only squad to claim back-to-back victories in the week, but it wasn’t enough to help them to keep their place in the top three of the standings. With Team Liquid bagging a win and Ninjas in Pyjamas placing high (but not winning) in many of the 20 matches, TSM moved into fifth place. But it’s still wide open.

Other teams to display moments of brilliance include Red Diamonds, CrowCrowd, Winstrike Team and Pittsburgh Knights all with two chicken dinners, and Raise Your Edge with three. Natus Vincere, G2 Esports, ENCE, Team Vitality, Digital Athletics, and FaZe Clan all got one win in Week 2.

Here’s how the leaderboard looks after the second week of action in the PUBG Europe League:

Team Liquid moved up the standings massively after this week, which is something most enthusiasts, fans, and analysts expected from the get-go. While they’re definitely lagging behind ENCE in points, grabbing a few match wins in the final week will help them to close the gap and thrust themselves into the top spot of Europe’s first ever official competitive phase.

It’s surprising to see FaZe Clan stick in ninth place after the second batch of 20 games, but they’ve been known in the past, for a long, long time, to be incredible at clutch performances when they matter the most. If they want to prove they’re still a force in PUBG esports then the third and final week will be huge for FaZe—a spot in the FACEIT Global Summit: PUBG Classic is on the line, too!

M19 barely sitting above last place in the leaderboard is somewhat surprising considering the positive string of results—including event wins—they witnessed in 2018. Perhaps the current playstyle doesn’t match well with their slow and methodical style, or it could be the incredibly unpredictable final circle we’ve seen so far in the competition.

Next week will be the final week in the first phase of the league, due to delays to the start of the competition. While the threat of relegation isn’t looming this time, those occupying the bottom of the standings will be looking to prove they can hang with the best teams in the PEL; the top of the leaderboard is still rather open too so there’s a lot to look forward to in Week Three!

Other
Share
Adam Fitch
Adam Fitch is a freelance esports journalist that typically covers the industry at large, writing for a number of popular outlets from January 2018. He was first introduced to the concept of playing video games competitively through Call of Duty 4.
Follow me