Elyoya: “I Think [MAD Lions] Has The Complete Package” 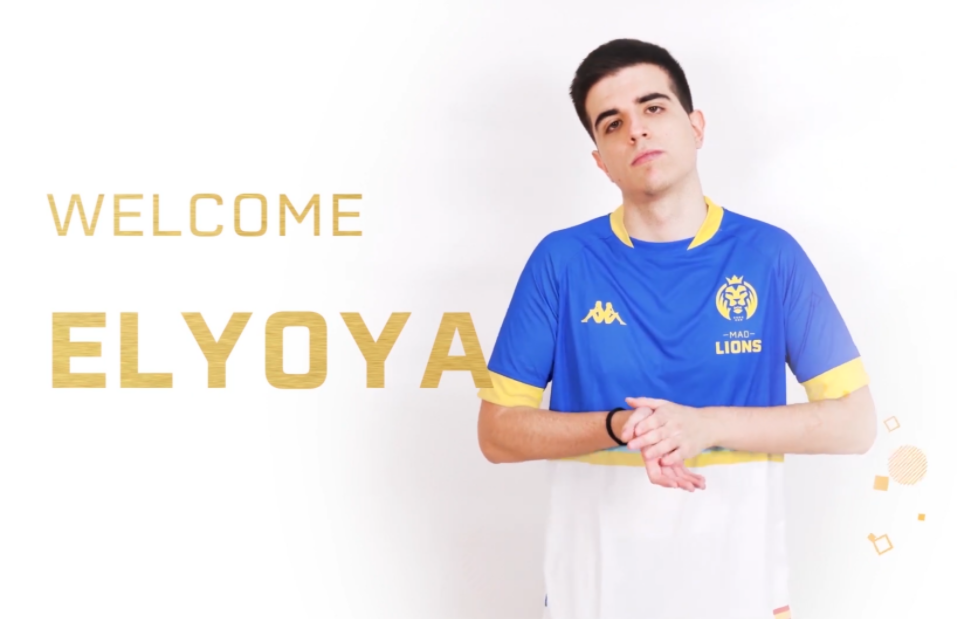 Elyoya takes on the jungler role for MAD Lions in the LEC this year. (Photo courtesy MAD Lions)

With the dust of the offseason shuffles settled at the end of last year, League of Legends esports is just focused on one thing: the Spring Split. Teams are currently training, scrimming, doing everything in their power to prepare their players for the new season. So too is MAD Lions, who brought two new players to their lineup to compete for the LEC title.

We sat down with their new jungler, Javier “Elyoya” Prades. The young Spaniard started his professional career just two years ago, but already has breached the upper echelons of competition. He told us what it means to him to get a shot at playing in the LEC, what his own expectations are for the 2021 season, and how he fits into his new roster.

Hotspawn: Welcome, Elyoya! 2021 has just begun, and I imagine you’re pretty excited for it.

Elyoya: Yes, I’m doing really well. Actually, in terms of happiness, I’m in my peak at the moment. I’m really excited for the LEC to start. It has always been my dream to play on the LEC stage, and I think I got the best opportunity that there was for me. I’m just really excited to get going.

Hotspawn: You say it has always been your dream, but you only started your professional career in 2019. Do you realize how crazy it is to have made it to the top level so quickly?

Elyoya: Yeah, I do. I feel like it was fine, but for me it’s… Ok this might sound like I have a big ego, but I feel like I haven’t even accomplished anything yet. Who will remember me for being the guy that made it into the LEC first? I feel like no-one really cares about that. There are even people who made it from solo queue straight into the LEC, which is something I didn’t do. I feel like this is a ‘worthless accomplishment’, for now. I have to show what I can do now.

Hotspawn: When did MAD Lions approach you to talk about you joining the team?

Elyoya: It was after Worlds that they contacted me. I wasn’t even expecting it. They said “Hey, are you down to just have a talk? We should have a meeting.” I told them that sure, I would obviously be down for that. From that point we had a meeting, and in the interview it seemed like Mac liked me. So we kept talking, we did some more interviews and in the end, they decided that I was the best option.

Hotspawn: Were you in talks with other teams too?

Elyoya: I did, yeah. But I thought that the offer from MAD Lions was the best for sure.

Hotspawn: Obviously, they did well last year, and they also have an academy team in the SuperLiga Orange in Spain. Were they a team you had been following closely yourself?

Elyoya: Yes, they were. Actually, the fact that they are a Spanish organization didn’t really affect my decision. My decision was based on the players, the coaching staff, that kind of stuff. They had the best roster that I could join from the offers that I had. I think that they have the complete package at MAD Lions.

Hotspawn: Last year, MAD Lions really profiled themselves as this goofy team that was joking around a lot. What were your first impressions when you joined the team?

Elyoya: There was definitely this fun atmosphere. [laughs] It’s mostly Carzzy, he’s just that kind of guy. When he is happy, it is contagious. He will spread his happiness to everyone. He’s really good at influencing the mood. If he is happy, the entire team will be happy. It’s just as easy as that. He’s an emotional leader.

Hotspawn: You’ve been practicing with them for a few weeks now. How has that gone so far?

Elyoya: It has been going fine with the team. For me, personally, it was a bit tough. There are three players that already were in the team, and they have a lot of knowledge. There was a bit of a gap, and there still is. But that just means that I’ll have to continue to practice hard. I just feel like it’s a new challenge, and that is something good.

Hotspawn: About practicing and improving: what are the goals you have set for yourself this year?

Elyoya: My goal, in the long term, is just to become the best jungler and the best player. But for this year, the goal I have is to make it to Worlds. From that point, I will already be satisfied, but I will not be happy. We need to at least qualify for the quarterfinals or something like that. I need to be confident in my gameplay, and see that I’m actually playing well.

Hotspawn: You strike me as a pretty confident guy, but still, you sometimes see that rookies have trouble dealing with pressure once they make it to the LEC. Is that something that could impact you?

Elyoya: Yeah, it can. I think that nerves can definitely influence me. In the past, it has. The way I like to think is: it’s on me. They’re my nerves. It’s something that I should be able to control, or at least it’s something I can learn to control. It’s something I need to learn how to do. I am confident in myself that I will be able to manage it. But maybe I don’t, you know? Maybe I am a hard choker. [laughs] It’s all me. I think I’ll be fine—I hold myself to high standards. At the moment, I think I can do it.

We wish you a warm welcome to @MADLions_LoLEN !@Elyoya_LoL as Qiyana 🔥🍃❄️

Hotspawn: MAD Lions played an aggressive, proactive playstyle last year. Can you keep up with their pace? And since jungle metas vary every years: can you easily switch playstyles?

Elyoya: I feel that, as a jungler, you need to adapt a lot. The jungle changes literally every season. It’s either XP, they are adding new camps, the Scuttle Scrab works differently now too… So, I need to adapt. It’s part of how the jungle role works. If the meta changes, I will need to change too. Maybe sometimes I’ll need a few more games, but that will come with practice.

Hotspawn: Many LEC fans will be seeing you play for the first time and don’t know much about you as a player. Some players have trademark champions that rile up the crowd whenever the champion gets picked up. Do you have such a pocket pick?

Elyoya: My best champion last year was Qiyana. But she has been removed from the jungle meta a bit now. I’m still waiting for the first moment that the champion is in a fine spot so I can play it. I just feel really comfortable with it, and I think that as a champion she is really, really good in the jungle.

Hotspawn: Finally, is there something you’d like to say to the fans who followed your journey up until here, and to the MAD Lions fans who’ll be cheering you on this season?

Elyoya: For me, in the past, I would get all of my confidence from the support of the fans. Watching them cheer for me is something that really helps me. I would ask if you can please continue supporting me. It has really helped me throughout my career and it would be perfect if you can keep doing that. Even if things don’t go so well, if you could keep cheering for me, it would be a really big help.

The LEC Spring Split kicks off on January 22nd.