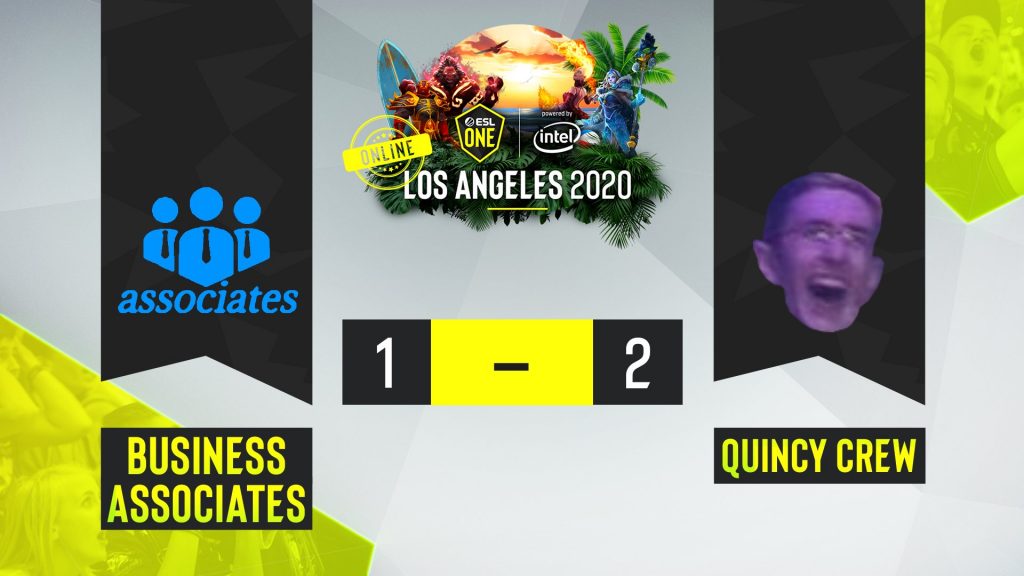 Another day of the North American portion of ESL One Los Angeles Online is in the books, with Evil Geniuses and Quincy Crew proving their worth on this second set of matches.

After a shaky start to their ESL One Los Angeles run, Evil Geniuses are finally looking a bit more like the team we expect them to be in the North American region. Meanwhile, on the other side of the bracket, Quincy Crew has gone from strength to strength, with their opponents, business associates, looking like they’d never recovered from their tilting pair of losses on the first day of games.

After a humbling series of games against Quincy Crew on Saturday, EG desperately hoped to improve their performance in their second game of the tournament. Thanks to a fantastic pair of games from Artour “Arteezy” Babaev, the North American powerhouse is once again living up to its potential.

Game one saw the team pick up a hero that dominated the first Matchday of North America. Terrorblade has been a deadly pick on every one-position in the region, but on Arteezy, it was even more so. Even with the increased gold price on the Ring of Tarrasque preventing it from being a starting item, Terroblade benefits massively from passive health regeneration, allowing him to farm up easily in lane. As a result, EG quickly scaled out of control, pushing down lanes, before roaming and killing CR4ZY across the map. There really wasn’t anything their opponents could do against this hyper-fed carry.

Once again, @Arteezy proves his Terrorblade is an absolute farming machine. If he keeps it up, this series could be a 2-0 sweep for @EvilGeniuses! #ESLOne
📺https://t.co/RUTJQihdBh pic.twitter.com/9XjjTyzgGc

For game two, the Terrorblade was rightfully banned out, leaving Arteezy to attempt to carry on his Ursa. But after initially starting the match off strong, taking first blood, EG as a whole began to give up kills in lane as they failed to rotate. CR4ZY looked to have taken the lead by purely out-laning their opponents. Gold slowly stacked on their carries, and the team looked to scale into late-game.

And that's GG! @EvilGeniuses wins a clean 2-0 against @gocr4zy after a big Roshan fight!

Finally, an ugly fight a Roshan turned sour for CR4ZY, and EG was able to use Aegis to push down lanes and take the high ground. EG wins in a deceptively short match in which they barely had control of the game.

While the scoreline of the series would show an easy win for EG, the second match proved that this team is prone to making plenty of mistakes on their way to a victory. CR4ZY, on the other hand, still looks like a strong team, but it’s their decision making that’s letting them down. It’s very much anyone’s tournament heading into the final matchday Wednesday.

After connection issues and power cuts hurt their chances of winning in their previous series, business associates went into this game looking to prove their worth. To achieve this, for game one the squad picked a trio of beefy heroes, including the tanky front liners Bristleback, Mars, and Wraith King.

To counter this, opponents Quincy Crew chose a high mobility comp, which immediately affected the pace of the game. A quick kill from Tiny to give them first blood showed that QC’s proved the effectiveness of their lineup. However, the advantage of mobility quickly fell apart with a series of messy fights from Quincy Crew, allowing the game to fall out of their hands.

Their Slark was too weak to kill BA’s huge tanky heroes, and as a result, business associates took home their first win.

For the next match, rather than counter the Slark BA instead picked him, with a much more of a carry-focused team compared to their tanky bruisers of the last game. What’sWhat’s more, Leon “Nine” Kirilin’sKirilin’s Bristleback proved too strong for the Monkey King of his opponent, forcing mass rotations from QC.

But another series of sloppy fights seemed to remove Business Associates’ control of the match. QC’s team fight-focused composition was just too strong. The catch from Monkey King, the Legion Commander’s challenge, and the raw power of Ogre Magi and Phoenix just made it too hard for BA to take fights. Ultimately, QC prospered from the chaos and taking us to game three.

After a short break to allow teams to regroup and make sure they had the latest update installed, QC picked a very similar draft to the last game, albeit adding the Batrider and Pangolier. Meanwhile, business associates attempted to channel Arteezy’s impressive performance from Monday by grabbing the Terrorblade.

But the Terrorblade wasn’t the hero that took the initial lead. Instead, Nine’s Pugna bullied the Pangolier mid until QC was forced to strike back. Reacting to the constant team fighting of their opponents, QC punished the dives of business associates, as their cores slowly grew in strength. Apart from a single teamfight where BA managed to get some good kills, QC looked in control all game.

But even this wasn’t enough to mitigate the 25k lead of QC, and after a cautious Roshan, the team pushed in and finished the game. Business associates fall to 0-2 and are now hanging by a thread in this tournament, with their fate not truly in their hands. Meanwhile, this Quincy Crew roster is looking like a favorite to win this entire event.

After our second set of matches, the NA region seems a little more decided. QC and EG are the clear favorites, with CR4ZY and BA tailing behind. The final day of the NA group stage starts Wednesday, with EG facing off against business associates and QC meeting CR4ZY. Tune in to these elimination matches on ESL’sESL’s official Dota 2 channel.