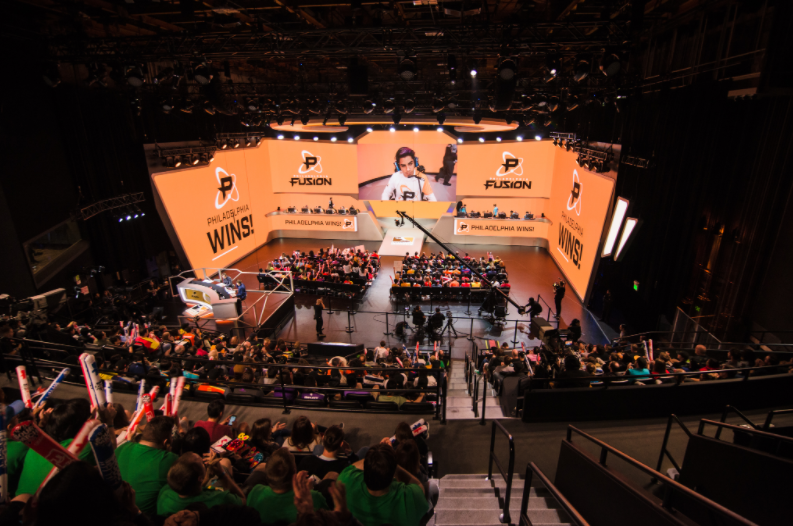 Week 13 of the Overwatch League featured a variety of entertaining matches in both Asia and North America. Week 13 was the first opportunity for OWL teams to utilize Overwatch’s latest DPS hero, Echo. She was a key part of the week 13 meta and ended up having a 70%+ pick rate for the week.

Surprise, surprise, it's almost tournament time! Take a look at the format for the #OWL2020 May Tournament! pic.twitter.com/V7gmr1UM9z

Winners this week took their first step toward securing a guaranteed spot in one of the upcoming May tournaments.

Echo was available to play in OWL matches for the first time in week 13. She was technically eligible to be played in week 12, however she ended up getting banned from the hero rotation by the randomized Hero Pool system. She was a very popular pick throughout week 13, so it would appear that predictions that Echo would dominate the OWL meta were accurate.

Although Echo’s standard abilities are powerful, the really broken thing about her is her ultimate ability. Echo’s Duplication ultimate ability allows her to transform into an enemy hero and build their ultimate very quickly. This unique feature led to some interesting strategies and even some odd hijinx. At one point, viewers were treated to the spectacle of four Winstons at once during a match between the L.A. Valiant and the Atlanta Reign. Over the course of about two minutes, four different players played Overwatch’s favorite gorilla scientist and used his ultimate ability.

Other Echo ultimates lead to double Orisa and double Brigitte compositions, among others. It will be interesting to see if the preferred duplication targets change over time as OWL teams continue to experiment and discover new innovative ways to use Duplication.

Asian teams primarily played Echo in dive compositions, while North American teams utilized Dive, Bunker and Deathball compositions with the new hero. The most common Echo composition was a dive composition that included tanks Winston and D.Va and featured the support heroes Moira and Brigitte in lieu of the traditional Lucio. Throughout the weekend, Echo was also played alongside Double Shield bunker compositions and Reinhard/D.Va compositions. If week 13 is anything to judge by, we can expect to see plenty of Echo going forward.

Shanghai faced its most dangerous competition yet in Saturday’s match against the New York Excelsior. For a moment, it looked like Shanghai’s winning streak was about to end after the NYXL took a 2-0 lead going into half-time. However, the Dragons regrouped and came back to reverse sweep the NYXL in a 3-2 victory. Saturday’s victory extends the Dragon’s winning streak to eight games.

Thus far in OWL Season 3, the Dragons have dominated the Pacific Asian region.  They have repeatedly proved their superiority over the Chengdu Hunters, Guangzhou Charge, and Hangzhou Spark. However the Charge, Hunters, and Spark are all considered relatively low tier. A victory over the Excelsior is much a more impressive accomplishment.

The NYXL is a historically excellent team who entered week 13 with a 7-1 record. The NYXL debuted in the Pacific East Division last week, defeating both the Charge and the Hunters in convincing fashion. Shanghai’s victory against them proves that the dragons aren’t just the best in their region, they are the best in the world. Shanghai is more than likely to secure the top seed in the upcoming tournament, assuming they continue to play this well.

The Fusion narrowly avoided a reverse sweep to win their match against the Paris Eternal on Sunday. Fusion and Eternal games are always incredibly close. In fact, the Eternal are the only team to beat the Fusion in Season 3. These teams have faced each other three times this season, with the Fusion winning two and the Eternal winning one. Every match they have played has ended in a very close 3-2 score.

One key to the Fusion victory was Josh “Eqo” Corona’s performance on Echo. EQO put on an Echo master class, dominating the Echo v. Echo duel throughout the match and dealing considerable damage to the enemy dive tanks to keep them at bay. He was named the player of the match for his incredible contributions.

To be fair to Paris, the Eternal played very well and nearly won this match. It didn’t help that the Eternal’s Main Support, Joon “Fielder” Kwon, was playing from Korea on 200 ping. Fielder is the Eternal’s newest player, added this past week after Main Support Kruise left the Eternal to join the Toronto Defiant. Despite his technological challenges, Fielder still managed to perform at a very high level. If he was playing on a normal ping, this match could very well have gone the other way.

The Fuel have been going through some sort of personal renaissance over the past month, to the point where they don’t look like the same team that started season three only a few months ago. In their match against the Justice, the Fuel continued to dominate, winning the series 3-0. Going into week 14, the Fuel are tied for 8th with the Dynasty and the Eternal.

During Sunday’s match, the Fuel’s DPS were the unquestioned stars of the show. Either Dong-ha “Doha” Kim or Gui-un “Decay” Jang won the player of the match, depending on which commentator you ask. Although the player of the match graphic and replay was Decay, Jack Wright mistakenly talked about Doha’s Echo play through the entire segment. Decay played his iconic top tier Tracer while Doha showed off his new skills on Echo. The Fuel DPS have been leading the team to victory after victory over the past month.

Going into week 9, the Fuel were 0-3 and positioned near the very bottom of the bracket. Coming out of week 13, the Fuel are 4-4. Somehow, the Fuel have clawed themselves from the bottom to a top eight position. Of course, the Overwatch standings are a mess and barely a fair indication of who is the strongest team, but regardless the Fuel went from a 300+ day losing streak to four wins and a close loss to the defending champions the San Francisco Shock in only a few weeks.

The Fuel’s unexpected success goes to show that you can’t count anyone out too early, and that the OWL season is long. It will be interesting to see if they can keep their momentum going against the top ranked Fusion next week.

L.A. Gladiators rise up the rankings with victory over Toronto Defiant

The Los Angeles Gladiators defeated the Toronto Defiant in a 3-1 series on Sunday. The Gladiators utilized Ashe in a unique bunker style composition, bucking the trend of playing Ashe in primarily dive compositions. The Gladiators hold a 4-3 record, which is enough to place them into 6th on the OWL standings.

In week 13, The Seoul Dynasty lost matches to both the Guangzhou Charge and the Hangzhou Spark. Sitting at 13th and 14th, neither Guangzhou or Hangzhou have proven to be particularly challenging opponents throughout season 3. Nonetheless, both teams handily defeated the Dynasty in dominant 3-0 fashion.

These matches were further evidence of the decline of the Dynasty. While some teams have been climbing the rankings, Seoul has been dropping quickly. In only three short weeks, the Seoul Dynasty went from owning the top spot on the rankings with a 2-0 record, to being tied for eighth with the Fuel and the Eternal. To say it nicely, the Dynasty’s performance in the Pacific East division has been pretty disappointing.

If Seoul wants to perform well in the upcoming tournament, they need to figure out how to succeed in the Pacific East division. If they can’t figure it out soon they risk falling out of relevance.

The Valiant upset the Reign on Saturday by winning a very intense series on Sunday with a 3-2 reverse sweep victory. The Valiant’s reverse sweep was only the second reverse sweep in their franchise history. With Sunday’s victory, the Valiant showed that they are a bigger threat than their record might indicate.

Although the Valiant came out initially with Damon “Apply” Conti on the echo, after losing the first two rounds they subbed in Kai “KSP” Collins who played primarily Ashe and Reaper. Things seemed to turn around almost immediately once KSP jumped in. KSP has made a name for himself over the past couple of weeks, as one of the best DPS players in Overwatch. He won the player of the match.

The Reign definitely came into Saturday’s match the favorite, however the Valiant have proven to be a bit of a wild card in season 3. Although their record of 3-6 might not jump out as a top contender, the Valiant were able to defeat the SF Shock a few weeks ago. With today’s victory, the Valiant further proved that they can beat any team on any day, even if they can’t necessarily do that consistently.

What to expect in week 14

OWL Week 14 will feature a hefty twelve-game schedule, with seven games scheduled for Saturday, May 9th and the remaining five games scheduled to take place on Sunday, May 10th.

Most notably, the London Spitfire will finally return in week 14, debuting in the Pacific East region against the Chendu Hunters and the Guangzhou Charge. Like a few other teams, the Spitfire relocated to Korea due to the ongoing pandemic back in mid March. The Spitfire haven’t played an OWL match since March 1st, so it will be interesting to see how they stack up to Guangzhou and Chengdu next week.

Next Sunday the Florida Mayhem will face the formidable Vancouver Titans, who are returning to North American competition next week. Florida has excelled over the past few weeks, in part because they have faced relatively low tier teams. After several weeks of relatively easy matches against teams like the Boston Uprising, Florida will finally have the opportunity to show that they deserve their top 7 ranking next week.

Shanghai will be looking to keep up their win streak in a match against the Seoul Dynasty on Saturday and a match against the Hangzhou Spark on Sunday. Perhaps Seoul will be able to turn around their bad luck streak, but that is easier said than done against Shanghai, who is currently the most dominant team in Overwatch.

Sunday will also feature a match between the Dallas Fuel and the Philadelphia Fusion. Although the Fusion have proven to be one of the most formidable teams in the league, the Dallas Fuel have been on a hot streak lately and they will be looking to continue that hot streak against the top ranked Fusion squad.

You can find the full week 14 schedule here.