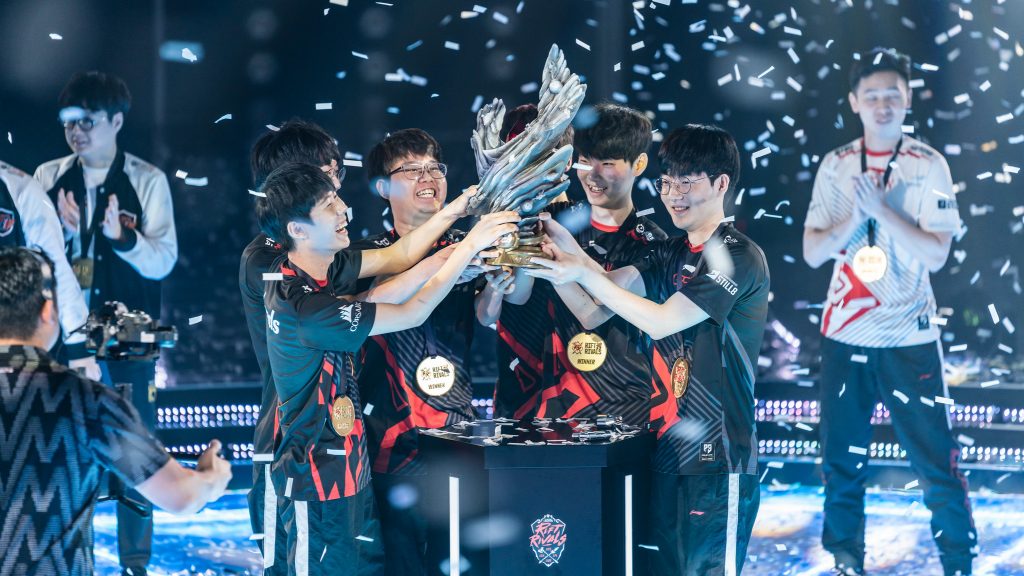 The LCK has finished its international trophy collection, defeating the LPL 3-1 in the Eastern Rift Rivals grand final to claim the region’s first crown from the league-vs-league event. Korea stormed to a 7-1 group stage record to lock their first-seed at the tournament, leaving China and the combined Taiwan-Vietnam group to battle it out in the semifinals.

Korea’s triumph in their home-hosted Rift Rivals event also snapped a 600-day drought on the international stage. After Samsung Galaxy defeated SKT 3-0 in the 2017 World Championship, the LCK watched China and Europe claim the past three tournaments Korea has contested. Now that streak is over, and it seems like the LCK is back on the rise.

Kingzone DragonX kicked off the four-game series with a cross-map composition against Invictus Gaming. With Kim “Deft” Hyuk-kyu on Ezreal, Park “Tusin” Jong-ik on Tahm Kench, and Moon “Cuzz” Woo-chan on jungle Karthus, KZ rolled over the reigning world champions. Deft especially shone on the Prodigal Explorer, dishing out maximum damage with his Trueshot Barrage.

Between Deft’s damage and a fully-stacked Mejai’s Soulstealer on Cuzz’s one-click Karthus ultimate, IG couldn’t withstand the late-game damage and capitulated the first game in 29 minutes. The win put Korea in control in the final, and SKT capitalized in the next game.

The three-time world champions have been in a major slump in 2019, with their Summer split highlighted by a losing streak to drop them into the relegation scrap early. There were none of those problems as they rolled over Top Esports, however.

SKT had struggled in the tournament, recording Korea’s only group stage loss to Invictus in a 43-minute battle that saw 2019 Worlds heroes Kang “TheShy” Seung-lok and Yu “JackeyLove” Wen-Bo combine for a massive 52.5k damage to champions.

It took the LCK four games to defeat their LPL rivals in the relay-race grand final. (Photo via Riot Games)

Neither the relegation-battle locked SKT nor the struggling team from Day 2 appeared in the final. Led by mid laner Lee “Faker” Sang-hyeok on Neeko, the seventh-placed LCK team put Korea up 2-0 in the series. Once regarded as the greatest player in the world, Faker reminded fans why he held that moniker with well-timed Pop Blossoms that opened TES up in fight after fight until SKT locked in the second win of the series for the LCK.

The LPL wasn’t going to go out without a fight though, as Funplus Phoenix avoided the series sweep with a half-hour victory against current LCK frontrunners Griffin. Kim “Doinb” Tae-sang was the lynchpin for FPX’s success, locking in Pantheon mid and running away with the game as the Artisan of War.

Doinb had selected the hit-or-miss Pantheon pick against Jeong “Chovy” Ji-hoon’s mid lane Irelia, and the choice paid off in spades. Doinb roamed time and again on the dive-bombing bruiser, crushing Park “Viper” Do-hyeon (Viktor) and Son “Lehends” Si-woo (Tahm Kench) out of the bot lane and setting FPX up for a fast-paced finish.

Aided by the constant threat of Doinb’s well-fed Pantheon, FPX collected a 24-minute Baron Nashor against the struggling Griffin roster. After scoring the major neutral objective, FPX were able to close out the series and put China’s first win on the board in the finals series.

There was to be no game five for a potential reverse sweep from the LPL though. Damwon Gaming entered the battle against JD Gaming in the final clash of the series, and took just 27 minutes to confirm Korea’s Rift Rivals crown for 2019.

Damwon had near-complete control of the map from the first click, and Kim “Canyon” Geon-bu again showed the power of Karthus jungle with a 7/2/11 performance that wiped JD Gaming off the map with his ultimate bursts. JDG were able to put one foot in the door with an early skirmish win, but Damwon emerged the victors in the 24-10 clash.

There were more than 600 days between Korea’s last international title and their Rift Rivals success. (Photo courtesy of Riot Games)

For LCK fans, the Rift Rivals triumph will be relieving. The region has been able to wave away their recent struggles against their Chinese rivals, and will now turn all eyes to the 2019 World Championship in Europe.

The region’s campaign to return to the top of international League of Legends has also received a shot of confidence after Korea’s Eastern Rift Rivals victory rounded out the league’s trophy case.

While SKT still hasn’t looked as convincing as they could be, strong showings from Kingzone, Damwon, and Griffin will also be something to build on for Korea, and something to learn from for fellow Worlds contenders China and Europe.