East versus East, West versus West at The International 2019 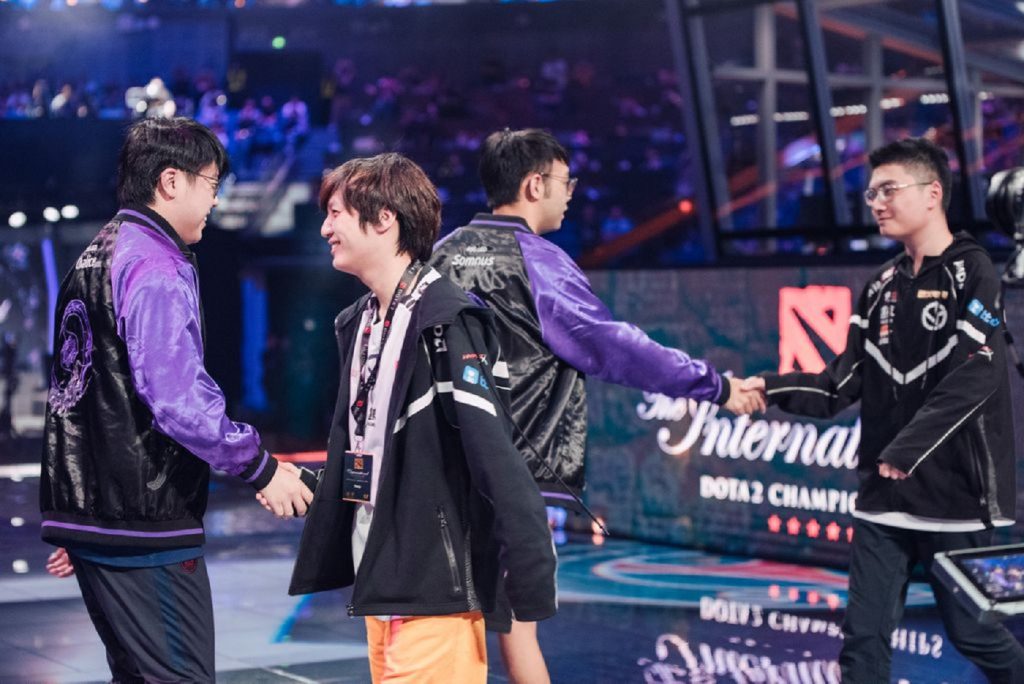 Vici Gaming couldn't match PSG.LGD in the upper bracket of The International 2019. (Image via Valve)

The International 2019 saw two eliminations on day three. Both were impressive series, but it was the Team Secret versus Mineski series that some are hailing as one of the best Dota 2 series ever. And that was only one half of the day! Two upper bracket series wrapped up the day: an all-China series and then a rematch of one of the most memorable series at TI8, Evil Geniuses versus OG.

China’s two most successful teams over the 2018-2019 season met today in the upper bracket of TI9. PSG.LGD, the second-place team at TI8, versus Vici Gaming, who won two of the five Majors in the DPC this year, was a match designed to delight fans of Chinese Dota 2.

Game one had a slow start. These two teams know each other well, and they were both cautious in the early game. At twenty minutes, there had only been six kills. Once PSG.LGD got BKBs online for Terrorblade and Kunkka, it was time to fight. And LGD were able to edge out Vici Gaming across several team fights, starting at 29 minutes and rocking along until a massive Roshan engagement. With buybacks down, Vici Gaming died back on key heroes and then tapped out.

Game two saw the two teams switch up their heroes, and then adopt the same slow pace. First blood didn’t happen until 4 minutes. LGD even went for triple Hand of Midas, a gold-farming item aimed at out-scaling Vici Gaming into the late game.

It was a greedy decision that Vici Gaming punished wanted to punish by putting the pressure on, but LGD never gave them the opportunity. LGD had too much lockdown and control for Vici Gaming to overcome. They were able to disengage from fights they didn’t want to take and overpower Vici Gaming when they saw the opportunity.

PSG LGD are Top 3 at The International 2019. Congratulations! #TI9 pic.twitter.com/KcvLBJYUzo

Vici Gaming are now knocked down to the lower bracket, where they await an opponent. PSG.LGD advance to the upper bracket finals, which take place on August 24.

In game one, Artour “Arteezy” Babaev took an early first blood, before the first minute, downing Anathan “ana” Pham’s Phantom Assassin in the top lane. Evil Geniuses put Arteezy in the Radiant off-lane as part of a tri-lane, leaving Gustav “s4” Magnusson to dominate on his Enchantress in the bottom lane versus Sébastien “Ceb” Debs’ Earthshaker. Meanwhile, in mid, Sumail “SumaiL” Hassan, along with rotating EG supports, bullied and killed Topias “Topson” Taavitsainen’s Invoker in mid. The bottom line? EG won all the lanes.

OG’s slow-paced draft left them too far behind Evil Geniuses’ line-up. They were picked off all over the map and never recovered. Evil Geniuses stayed in control from start to finish and took game one in a 30-minute long stomp.

OG came back in game two with a faster, more dynamic draft. Topson’s Tiny was especially active, with six kills in 11 minutes.

Evil Geniuses pushed back in the mid game, making plenty of pick-offs to put a pause in OG’s aggression, but OG were able to get their combos working. The ana Faceless Void Chronosphere locked enemy heroes in place, with Jesse “JerAx” Vainikka’s Earthshaker providing some control with his Fissure. Meanwhile, Johan “N0tail” Sundstein’s Oracle gave OG a much-needed escape mechanism. They came together to overpower Evil Geniuses in game two, sending us all the way to a game three.

The draft was key in game three. OG had drafted Enchantress, Invoker, Rubick, Juggernaut and Sand King to Evil Geniuses’ Tiny, Mirana, Crystal Maiden, Dark Willow and then last picked Anti-Mage. Because of how badly Sand King lanes against Anti-Mage, OG shifted the hero to off lane and put N0tail on the Rubick as a position five. It all came down to how well OG could make this work.

A rough laning stage left OG falling behind, but an OG kill on the Arteezy Anti-Mage created space for ana to farm his way back up to par. OG kept the pressure on EG to keep Arteezy from getting involved in the game. Evil Geniuses had no answer for OG’s aggression in this game, with Anti-Mage unable to get online fast enough.

In the end, OG has guaranteed themselves a top three placement, with a rematch with PSG.LGD the next item on their agenda.

Evil Geniuses heads to the lower bracket, where they will wait for an opponent to face on August 23.

Did you miss today’s the lower bracket games? Or maybe you just want to revisit them? We have you covered. Check back with Hotspawn frequently for all your The International 2019 coverage!