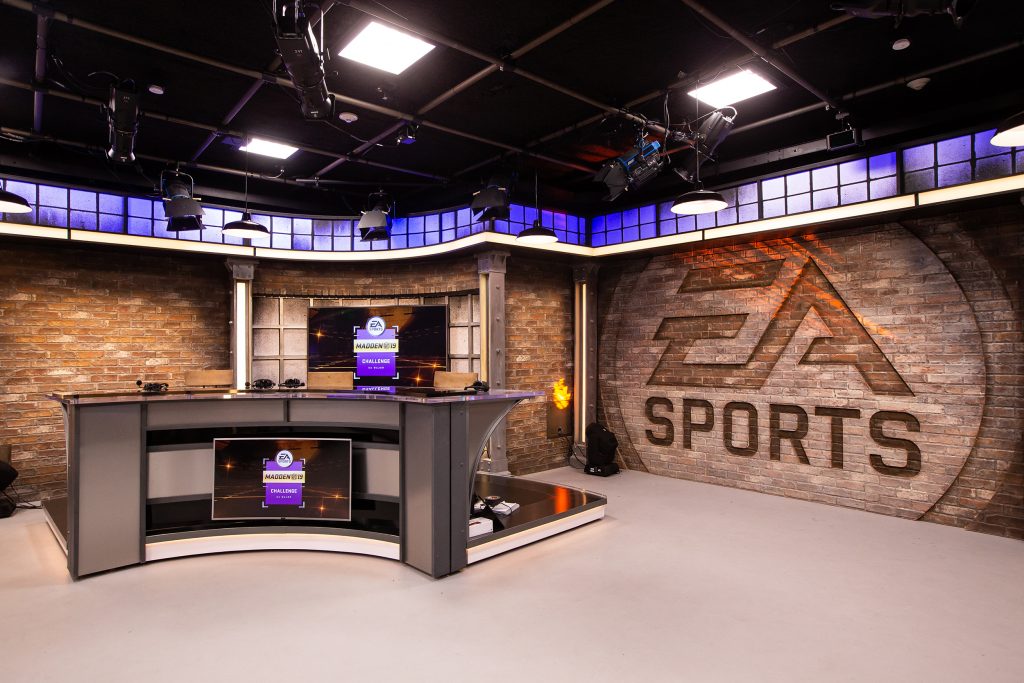 The new EA studio will become the new home of many events on the Madden circuit beginning with the Madden NFL 19 Challenge. (Photo courtesy of EA)

On Friday, March 15, Electronic Arts (EA) announced they are currently building a new gaming studio designed for competitive Madden events. The studio will become the new home of many events on the Madden circuit beginning with the Madden NFL 19 Challenge on March 15 – 17.

The studio will replace the outsourcing model EA has used for production of Madden events in the past. According to Todd Sitrin, EA’s Senior Vice President of the Competitive Gaming Division, this will help the company create content around competitive Madden and save money.

“When you are leasing [outside venues for production] you’re beholden to the capabilities of outside production groups,” Sitrin said. “You are almost always using an environment that was not set up for competitive gaming so we were constantly sacrificing our ability to do various things in broadcast.”

The new studio spared no expense in its creation. The studio features AR/VR green screens, a four-person caster desk, and 200 light fixtures. In all, the studio cost was in the “single digit millions” according to Sitrin. A cost he says will be less expensive than the outsourcing model it replaced, after a couple of years.

At the helm of the technology in this new studio is EA’s Head of Broadcast Joe Lynch. He was the one who was the primary voice in the design of the studio, but he had the go-ahead from Sitrin to really deck the place out.

“I said to [Joe], ‘lets get all the toys and really push the envelope on this’” Sitrin recalled. “We want equipment suppliers to utilize us as a beta studio for up and coming new technologies before they go and try to sell it to a major linear television network.”

One of those new technologies is eye tracking, a device that pinpoints where players are focusing on the screen as they play games. Some esports organizations are already using eye tracking to help their players train and EA would like to bring that eye-tracking data to the broadcast.

“[Eye tracking] helps educate the audience as to why these guys are so good,” Lynch explained. “It also helps you break down a play and see why it happened. Say Skimbo was focused on the trips right, but Problem, who is on defense, was focused on the running back so he never saw the play develop and that is why he got burned.”

Obviously, Madden shares plenty of similarities with its physical counterpart. That is one of the main benefits EA has when acting as a beta test compared to other esports. If ESPN or NFL Network wants to include eye tracking in a future broadcast, they could turn to Madden as an example. Imagine if you could see a real-life QB running through his progressions while dodging an aggressive DE by climbing in the pocket. That would be a revolutionary sports experience and Madden eye tracking may be the first step towards making that a reality.

Right now the only events scheduled for the EA Broadcast Center are Madden events but EA says they are in communication with their other league partners over the location of future esports events in FIFA and NHL. Lynch also mentioned that the studio could house events for Apex Legends or Battlefield, all options are on the table for the new in-house studio.

“To me, it’s the unknown opportunity of the other things that are out there that are really amazing,” Lynch concluded.  “It just sort of sets the table for us as EA for the years to come.  There are so many things that we can do, that a year ago and would never have been possible.”