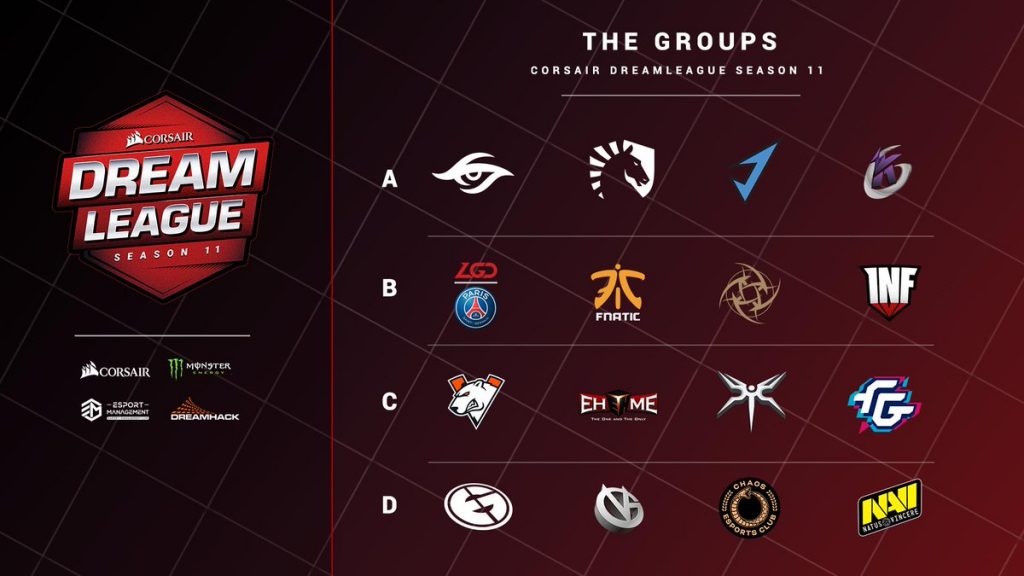 The Dota 2 Pro Circuit (DPC) crosses the mid-way point this week with the third Major in the season: the DreamLeague Season 11 Major, otherwise known as the Stockholm Major. Sixteen teams will compete in Stockholm, Sweden from March 14-24 for $1,000,000 USD and 15,000 DPC points.

Despite the huge prize pool, the DPC points are what teams really desire. The top twelve points-earning teams will receive direct invitations to The International 2019 (TI9).

Two teams have already assured themselves an invite: Team Secret and Virtus.pro who are both tied with 7950 points. They both have one first-place and one second-place finish at the previous two Majors.

After this event, there will likely be a handful of other teams with confirmed invitations. Among them could be Evil Geniuses, PSG.LGD and Ninjas in Pyjamas who round out the current top five.

Teams that don’t meet or exceed their own expectations at this event could be at risk of a roster change. With only four DPC events after the Stockholm Major—and only two of them Majors—, teams need to solidify their positions in the top twelve of the DPC rankings or really question if they have the right combination of players to succeed at TI9.

The sixteen teams have been divided into four groups for the group stage. Each group will use the GSL format to determine the top two teams and the bottom two teams. The top teams from each group will be seeded into the upper bracket of the playoff, while the bottom two will be seeded into the lower bracket. All of the series will be best-of-three, except for the first round of the lower bracket, which will be a single game to determine elimination. The finals will be a best-of-five.

This is the standard format used at the previous Majors this season. There’s urgency in winning the group stage games because no team wants to play a single game for elimination in the first round of the playoffs

The Groups for DreamLeague Season 11

Teams have been divided into four groups. Let’s take a look at how they stack up:

Group A features one of the current DPC leaders, Team Secret. Secret is widely considered to be at the top of their game right now. This team followed their win at the Chongqing Major with a win at ESL One Katowice 2019 where they looked unstoppable, dropping only a single game during the entire tournament. They’re on a sixteen-game win streak currently, and their first-round opponent, Keen Gaming will be hard pressed to beat them.

Keen Gaming’s one of the many Chinese teams right now that look strong in their region but aren’t having as much success internationally as might be expected. They just took second place at WESG 2018, so perhaps Keen’s ready for a breakthrough? They’re sitting in twentieth place in the DPC with 90 points from the Bucharest Minor. They need to finish in 8th place or better to break into the TI9 invites.

Team Liquid is the other team to watch for in this first group. They’re sitting in tenth place in the DPC. They’ve had a shaky season so far, skipping the first DPC events, and then competing in Chongqing without their star carry player, Amer “Miracle-” Al-Barkawi. They were last seen at MDL Macau 2019 at the end of February; they won. With the team at full strength in Stockholm, they could easily have a top three finish.

Rounding out Group A is North American squad J.Storm. This North American team is flying under the radar on their way to DreamLeague. The team competed at Chongqing and finished in 9-12th place, and since then, they’ve only played in two qualifiers, winning both. The potential for this team is quite high, but they’ve got a tough group to navigate.

The second group looks, perhaps, less formidable than Group A, but don’t be fooled. There could be a few surprises from these four teams.

PSG.LGD, fourth in the DPC, had a fourth-place finish at the Chongqing Major. They were the second place finishers at the International 2018 (TI8) and have been a little quiet since then. They skipped MDL Macau 2019 because Yang “Chalice”‘ Shenyi was unable to play due to a medical issue. Fortunately, the full team arrived in Stockholm, and they should do well in their group.

Fnatic is one of those squads that consistently do just all right. The Southeast Asia representatives were 5th-6th at the last Major, they placed fourth in Katowice, and they’re sitting in sixth in the DPC. Could they crack the top four in Stockholm? It’s certainly possible, but top eight seems like the safer call.

Fnatic may have a tough time going through both PSG.LGD and Ninjas in Pyjamas (NiP). NiP are sitting in fifth place in the DPC, only 70 points ahead of Fnatic. The European team missed the last Major and looked shaky in Katowice. But they won the WePlay! Dota 2 Tug of War: Radiant tournament earlier this month, and perhaps that will set them up for a solid performance in Stockholm? NiP face Fnatic in the first series of the group, so watch for that one!

South American Infamous face an uphill battle in their group. They have only 70 DPC points, from the first DPC Minor of the season. They added Mason “mason” Venne, an American, to the team on March 6, so there’s not a lot of data on the squad right now. However, they may benefit from the lack of expectations. They’re not on anyone’s radar as a contender, so they could easily catch a team off-guard with strong play or unique strategies.

If Virtus.pro doesn’t sail through Group C, there will be some very surprised fans out there. The CIS squad share first-place in the DPC with Team Secret. They were third at MDL Macau 2019, but honestly, they’ve been in the top four at most of the events they’ve attended stretching back to 2016. There have certainly been some blips here and there, notably the last two TIs, but VP is widely considered a powerhouse team.

Facing VP first are Forward Gaming. The North American team (one of three competing in this Major) are tied for 12th with 225 points. They want to do well here to move up, but the squad’s struggled recently. They need to come together as a cohesive team, staying focused on their own game plan to succeed.

Faith_bian will be out for an extended period following an arm injury sustained at MDL Macau. xinQ will step in at the 3 spot pic.twitter.com/v563S7zhiS

Chinese team EHOME will play the tournament with an offlaner borrowed from Team Serenity. Zhao “XinQ” Zixing replaces Zhang “Faith_bian” Ruida who fractured his upper arm when he fell during a photo shoot at MDL Macau 2019. It’s a rough situation for the team. They’ve also replaced Luo “eGo” Bin with Yang “END” Pu in the carry position. They’re in 8th place in the DPC with 720 points and want a good placement in Stockholm to secure their TI9 invite. Can they come together quickly enough to perform well?

The last team in Group C is Mineski. They’re making their DPC debut at DreamLeague. The squad’s trajectory has been on the rise. They’re starting to come out on top in their region over the last four months. Mineski had a 5-6th place finish at Katowice, in a field of eight teams, so they’ve had some work to do leading up to this tournament. The team should be happy if they make it into the top two teams of their group.

The final group is headed by Evil Geniuses. They are sitting in third place in the DPC after two third-place finishes at the previous Majors. They also placed third at TI8, so it’s becoming a trend for important tournaments. In Macau, EG made it to the grand finals versus Team Liquid. They placed second, but it was a bright spot for fans after the team had come just short of grand finals over the last six months. They should finish in the top two of their group, but there are three hungry teams looking to displace them.

Vici Gaming arrived in Stockholm after winning the StarLadder ImbaTV Dota 2 Minor. Despite being in 7th in the DPC rankings, the team struggled to qualify for DreamLeague and had to take the long route. This means they’ve got more competitive experience on the current patch than other teams, but that also means there’s more video of them for other teams to study.  They looked quite strong at StarLadder, and while DreamLeague is another caliber of competition, the Chinese team could do well.

The second South American team, Chaos Esports Club, will face VG first in the group stage. They’ve been shaky lately, with a last-place finish in Katowice and 9-12th finish in Chongqing. They’re tied in 12th place with Forward Gaming and Alliance in the DPC rankings. With the potential for a direct invitation to TI9 very much uncertain, this team needs to perform well in Stockholm.

The last team competing in Stockholm is Natus Vincere. The popular CIS organization has struggled to get traction this season. They placed second at the first Minor of the season, DreamLeague Season 10, but missed the second pair of DPC events entirely.

DreamLeague is a Dota 2 tournament series with a specific identity. Some call it “MemeLeague” and with good reason. In the past, the event has featured “the red button,” a button that broadcast talent push to activate various antics including games, singing competitions, food deliveries and so on. There’ve been costumed characters, including a sad panda, that pop-up to help fill time. Don’t expect a typical analyst desk between series. DreamLeague may look to play it a little more seriously because of its status as a Major, but don’t be surprised if they choose to lean into their identity as a playful, zany event!

With twelve of the fourteen teams currently in/tied for the top twelve in the DPC rankings, the competition in Stockholm will be fierce. Only two of the teams are guaranteed their invites to TI9 so far, and no one wants to sleep on an opportunity to secure a spot.

The first two days of the competition will be the group stage when all four groups will be competing at the same time. The primary stream will be on DreamLeague’s Twitch. After the groups are done, there should be that single stream to watch. So buckle up, get ready for a wild couple days, and check back with us later in the week for our breakdown of the group stage!