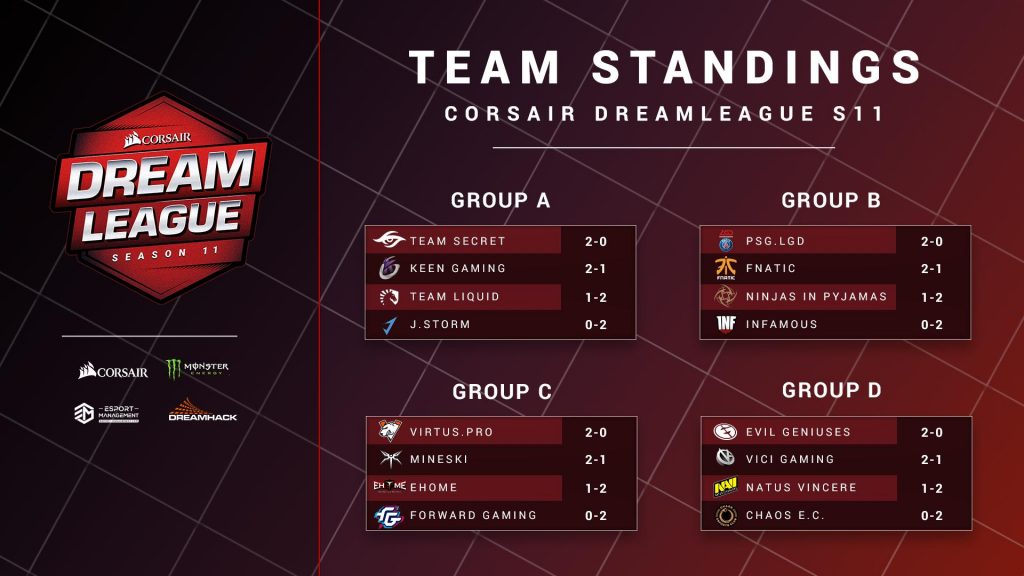 DreamLeague Season 11 has come to a close after two days of intense Dota 2 action with several notable upsets.

The group stage of the Stockholm Major, aka DreamLeague Season 11 has come to a close after two days of intense Dota 2 action.

The sixteen teams were split into four groups. Using the GSL format, teams competed for seeding in the playoffs. The top two teams in each group were then sent to the upper bracket and the bottom two teams were sent to the lower bracket.

There were a few surprises in the group stages.

Team Secret and Evil Geniuses rolled over their groups. PSG.LGD took top honors in Group B. Virtus.pro was the top seed for Group C, but they dropped a game to both of their opponents, Forward Gaming and Mineski, teasing viewers with the possibility of an upset.

J.Storm, Infamous, Forward Gaming and Chaos Esports Club were the first teams out each of the groups. They were all sent into the best-of-one first round of the lower bracket. One game will determine whether they stay in the competition or not.

Upset?! Maybe not in @keen_gamingcn's eyes!
They take the series 2-0 and knock @teamliquid into the scary world of Bo1's!#DreamLeagueMajor pic.twitter.com/gfupqo1f0P

It was in the Decider Matches that we saw some upsets. First up was Keen Gaming beating Team Liquid in a relentless 2-0. The Chinese squad had recently placed second at WESG 2018, but their win over Liquid was still unexpected. They were able to capitalize on some misplays by Liquid, catching players alone on the map or luring them into one-sided team fights.

Vici Gaming beat Natus Vincere in Group D in a 2-0 stomp. The second match took fewer than 22 minutes, making it the second fastest match of the group stage. The fastest? Mineski versus EHOME in the Group C Decider. Mineski won 2-0 in two very quick matches.

In our DreamLeague preview, we called the Ninjas in Pyjamas versus Fnatic first-round series as one to watch, and we were not disappointed. Their first game was one of the best (and longest) of the entire group stage. They met each other again in the Decider Match for Group B. The first game went the way of Fnatic fairly decisively. The second game, however, was a back-and-forth slugfest, especially into the forty-minute mark. Definitely well worth checking out. Fnatic came out on top, 2-0, and Ninjas in Pyjamas will need to fight their way through the lower bracket.

The four-stream nature of the group stage made it easy for viewers to miss out on all the antics taking place on the primary stream. Host Jorien “Sheever” van der Heijden and her rotating cast of panelists participated in a talk-show-like opening both days, discussing the latest in Dota 2 news and a topic of the day. The latter were submitted by the community and weren’t especially popular with the panelists. Apparently being asked to talk about Elon Musk and climate change is outside of the normal wheelhouse for Dota 2 commentators!

A little bit of butterfingers going on here in the studio 🤣#DreamLeagueMajor pic.twitter.com/vd7ohbM5Tc

Sheever and her panelists also participated in games. These were hosted by a combination of the costumed character “Sad Panda” and “the Queen,” an AI-like voice who issued commands. The games included things like being blindfolded and trying to identify various items and liquids by scent and playing a game of hot potato with bottles of nail polish, with the loser having to paint one of their nails each round.

Playoffs start tomorrow and will extend through March 24. Most days will feature two best-of-three series, but the next two days will also include two of the first round lower bracket games, which are best-of-ones.

Tune in tomorrow to DreamLeague’s Twitch to see Natus Vincere versus J.Storm and EHOME versus Infamous for elimination tomorrow, as well as two of the first upper round games!