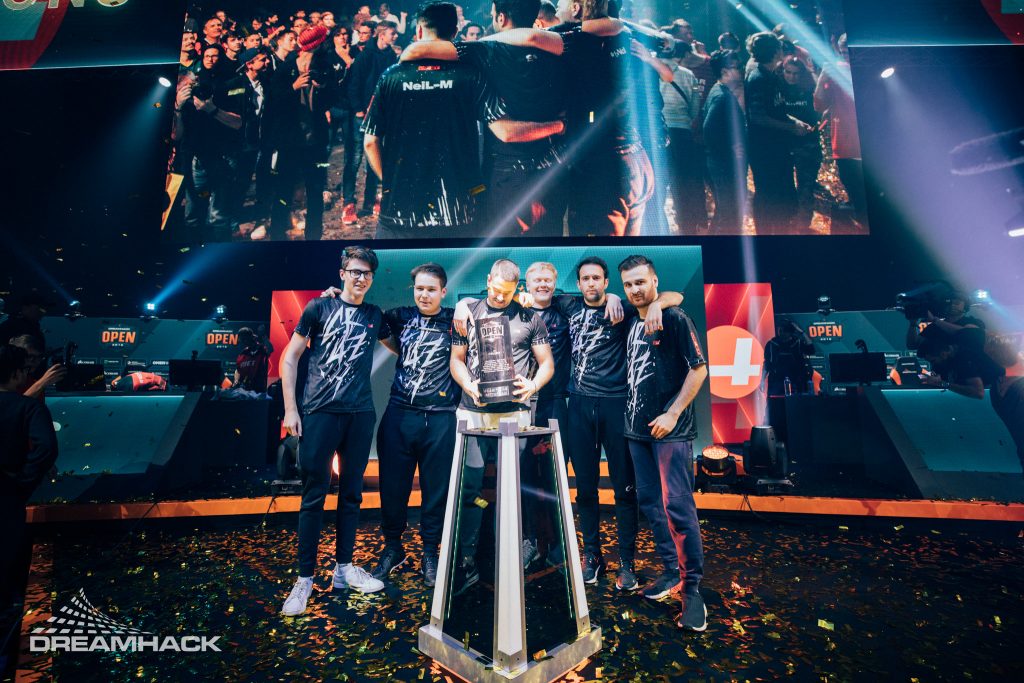 Esports fans turned their heads to Rotterdam this weekend as Dota 2’s DreamLeague Season 12 and CS:GO’s DreamHack Open took place in the Netherlands.

Roster additions, new organizations popping up and last-minute stand-ins—the days before the DreamHack Open saw a lot of movements and changes but the stage was set for some really CR4ZY action. This European squad won over the crowd with incredible individual plays and stellar performances as an underdog and claimed the trophy, putting US$50,000 in their pockets.

#DHOpen Rotterdam is a wrap and what an event it has been! 💪🤩

After losing the first round, CR4ZY stepped up to their A-game to fight for a place in the playoffs, defeated the HLTV sixth-ranked AVANGAR and outplayed Heroic on the last map of the event.

AVANGAR was the best-ranked team in Rotterdam, and they opened with a loss on the pistol round. This was a wake-up call for the CIS team. They checked every single corner on Overpass, unwilling to let the game slip away. ForZe, on the other hand, started on Inferno with a perfect opening – five players alive on the server with nearly zero damage. As ForZe continued to win round after round, the local team, Asterion, just rolled over. On Overpass, the Danish team, Heroic, delivered their latest addition, Casper “cadiaN” Møller, on the AWP against the former DreamEaters lineup. Finally, CR4ZY and HAVU had a blast on Dust2 in a much closer encounter than the other match-ups, and a better end for the Fins.

Both AVANGAR and Heroic had convincing wins in their opening matches, and it was now to show some first-class CS:GO to beat the opponent. AVANGAR had the better start on the T side on Inferno and gained a fast 4:0.Dzhami “Jame” Ali and his squad defended the AVANGAR lead in the first half to a 9:6 and managed to keep their advance till the end.

The Group B winners, ForZe and HAVU, met each other on Nuke and it was a back and forth from the very first start. The close 8:7 half time score favored ForZe but HAVU took the lead after the lost second pistol round. However, HAVU could not defend that lead to the end.

After a rough first day, both Beşiktaş and Hard Legion wanted to redeem themselves. Beşiktaş started with a win on the pistols on Train, the pick of their opponent and used the advantage for a quick 2:0 lead. But back on guns, Hard Legion woke up. They gained the lead and rolled over their opponent. On the second map, Beşiktaş was not able to turn the tide and left the competition with a 0-2 score and a disillusioning 3:16 on Mirage.

The first map for Asterion and CR4ZY was Train. Asterion started great on CT side but could not stay ahead of their opponent. CR4ZY closed the first half with 9:6 lead and, thanks to their new addition Georgi “SHiPZ” Grigorov, defended their lead to a 16:11 score.

On Inferno, the fans saw an even more dominating first half for CR4ZY (5:10) but they had difficulties closing the game in the end. After six match point rounds, Asterion was out of the DreamHack Open, and CR4ZY had another shot for the playoffs.

The duel between Heroic and Hard Legion started on Dust2. Hard Legion showed off their skills on this classic battlefield. After a rough start, the CIS team took the lead to a 16:8 victory.  The second map, Vertigo, was more of the same but in reverse, with Heroic dominating their opponents and ending the map 16:6.

So it came to the third and last map: Overpass. It was a close and thrilling battle to get to the playoffs as Heroic had a slightly better start on T side, but Hard Legion turned the first half in a 9:6 advantage. The CIS team kept their lead till round 27 and, at this point, Heroic used the momentum to finish with 16:14.

On Inferno, CR4ZY got the better start and stayed ahead of HAVU the whole game long. It was an assured 16:10 victory without any doubt. The second map, Train was dominated by HAVU and CR4ZY had no formula to break the game plan of the Finnish squad.

On Dust2, neither of the two teams could get any head start and, after an 8:7 halftime, CR4ZY on the CT side had to step up their game to defend the bomb sides. Finally they managed to close the game on round 28, carried by Georgi “SHiPZ” Grigorov again.

Day three of #DHOpen Rotterdam starts in 10 minutes! Today's the day we will crown a new champion!

On their own map pick, Heroic had a clearly better game plan for Overpass than ForZe. The score of 16:12 seems to be a close one, but the Danish guys had an answer to everything the CIS team came up with, especially in the second half.

Inferno was another story. ForZe took the lead in the first half on T side and managed to defend it till the end. 16:11 was the final scoreboard, and the fans were eager to see the clash on Nuke.

Martin “stavn” Lund and Patrick “es3tag” Hansen did not let ForZe away and scored 57 kills on the final map for a convincing victory.

The CIS team was favorite in this matchup with CR4ZYs new roster with Luka “emi” Vuković and Georgi “SHiPZ” Grigorov. Especially the Bulgarian 19 year old SHiPZ showed that he can carry his team. But on Mirage Rokas “EspiranTo” Milasauskas stepped up to a whole new performance level and helped to secure the win on their map pick. AVANGAR struck back on Dust2, but needed five consecutive rounds to win.

On the last map, Inferno CR4ZY managed to win the first half 9:6, and this lead was defended on T side for a spot against Heroic in the finals.

On paper, Heroic with cadiaN should have an advantage over the newly formed CR4ZY roster but after their victory against AVANGAR the panel, crowded in the arena and twitch viewers are not sure about this anymore. It’s Nuke where Heroic started on fire with a quick lead and perfect executions on both bomb sides. After the change to CT, it took only four rounds to close the map.

The panel had great expectations about CR4ZY on Mirage as they have beaten AVANGAR on this map earlier this day. Well, SHiPZ and his guys delivered especially the Bulgarian rifler took kill after kill on T side to show off a score of 24 kills after just 21 rounds.

So the final decision have to be done on Inferno – a map CR4ZY won three times here in Rotterdam (Asterion, HAVU and AVANGAR) and Heroic lost twice (AVANGAR and ForZe). The Danes got the better start on T side till round 6, where SHiPZ destroyed the team with an ace. From this moment on this became a close match, back and forth to a 7:8 halftime lead for Heroic. Could captain Marco “Snappi” Pfeiffer defend the bomb sites to victory? With pistols for sure but unscared individual plays of SHiPZ and Rokas “EspiranTo” Milasauskas brought back CR4ZY time after time to a 15:12 lead. And CR4ZY used their first match point to win DreamHack Open Rotterdam! What a day for the European squad this was.

A newly formed roster, an unexpected #DHOpen champion with a GREAT performance! 🤯

What to look for after DreamHack Open Rotterdam: