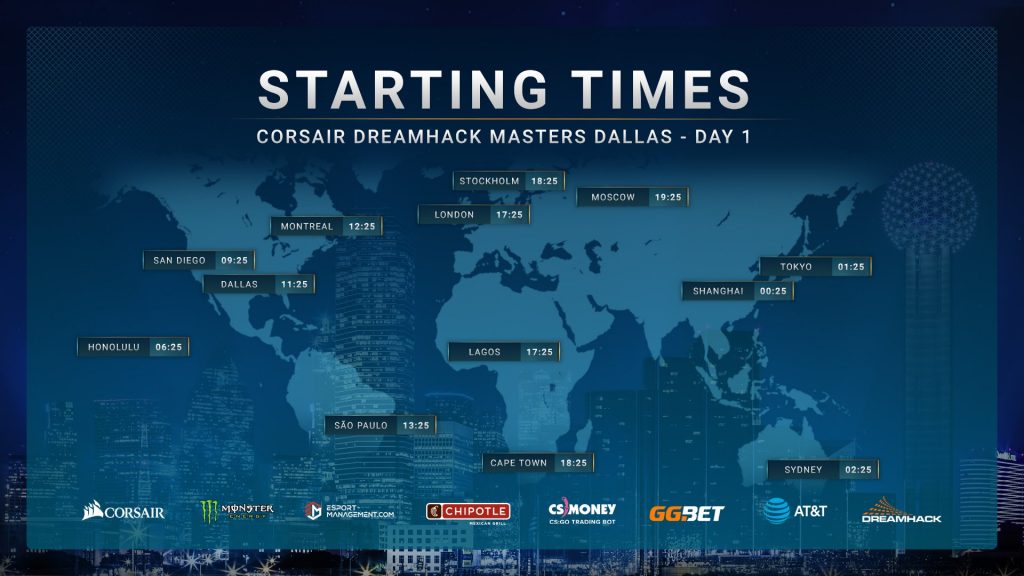 DreamHack Masters Dallas 2019 kicks off on May 28. (Image courtesy of DreamHack)

The Kay Bailey Hutchison Convention Center in Dallas, Texas will play host to the next notable LAN tournament on the Counter-Strike calendar—DreamHack Masters Dallas. The tournament features a high-caliber blend of invites and regional qualifiers (16 in total) that’ll skirmish for the majority of a $250,000 USD cash purse, and more importantly, a point towards the Intel Grand Slam Season 2.

With group play kicking off this Tuesday, let’s get right into what you need to know ahead of the event.

What better place to start than with North American superteam, Team Liquid?

Most of last season was littered with second-place or lower finishes, creating a balloon of doubt around the team’s ability to compete alongside titans like Astralis or Natus Vincere. 2019 has shown a much more promising start for the troop; most recently, Liquid added an IEM Sydney trophy to their collection. The win was fairly significant as the team wrestled with seeing a tournament through the grand finals for the better part of a year—and overcoming the mental roadblock at a tournament like the Intel Extreme Masters is a good sign moving forward for them.

Although Liquid is arguably the best team at this tournament, their success is far from guaranteed. Heavy-hitters in the form of FaZe Clan, ENCE, Vitality and Renegades will be just a few obstacles they’ll have to overcome to clinch a title finish in Dallas.

Just this past weekend, Liquid found themselves in the Grand Finals of cs_summit 4 against Vitality. It was the French that would surface as victors though in the shape of an absolute 2-0 stunner. Granted cs_summit is a far more relaxed tournament series, we anticipate the NA group to arrive headstrong in Dallas.

It’s been a good while since we’ve seen FaZe Clan displaying the supremacy they were once synonymous with among today’s talented prospects.

In between a first-place finish at the ELEAGUE Invitational and then, most recently, at BLAST Pro Series Miami, FaZe’s results have been a collection of mediocre placings. They’ve been less than what we’d expect from the European juggernauts.

We’ll be witnessing a far different FaZe in Dallas than what we’ve seen through the start of the season. As of two weeks ago, the in-game leader role will be helmed by ex-Virtus.Pro man, Filip “NEO” Kubsk. For several months, hybrid rifler Nikola “NiKo” Kovač took the reins to fill the vacant spot left by Finn “karrigan” Andersen at the end of last year.

There hasn’t been much time to really dig into NEO’s trial with FaZe just yet, though we expect them to have worked out some of the initial kinks by DreamHack Dallas.

Coming off a big win at cs_summit 4 this past weekend where they toppled Liquid in the grand finals, Vitality is absolutely a team to look out for at this tournament.

When Vitality entered Counter-Strike back in October of last year, their goal was clear: to become a top contender in the space. Roughly seven months later, the French organization has achieved just that.

Working beyond the initial honeymoon phase of launching a superteam with the likes of Nathan “NBK” Schmitt and Mathieu “ZywOo” Herbaut, the team achieved their first victory at DreamHack Atlanta last year. Things haven’t necessarily been all uphill from there, but the team has shown a bulk of improvements in performance – especially when pitted against the upper percentile of teams. In Vitality’s last three outings alone, they took first at Charleroi Esports 2019, booked their passport to Germany for ESL One Cologne, and obviously, trounced Liquid in a best-of-three to win cs_summit 4.

Again, the talent pool is deep Dallas—it’ll take some true effort to come out on top, but it’s well within Vitality’s grasp.

The Finnish roster, ENCE, took the world by storm back in March when they reached the Grand Finals of IEM Katowice against Astralis. Though the Finns narrowly missed what could have been an extraordinary story at the Major, they’ve continued their wrecking through the competitive circuit since. The team has proven they can hang with the best, even more so after vanquishing Astralis 2-0 at BLAST Pro Series Madrid earlier this month.

Though, our latest glimpse of ENCE at cs_summit 4 was arguably subpar. Each of their best-of-three matches in the groups ended in a draw, and strangely enough were either close or completely lopsided loses. The team we saw at the Summit Studio in Los Angeles just didn’t look like the technical and tactical ENCE we’re used to seeing.

At their best, the Finns could win this tournament—though, anything short of that will be an utter toss-up against the teams in attendance.

Perhaps FURIA will miss the cut on most DreamHack Dallas previews, but we believe they are at least worth mentioning here.

The Brazillian side has quickly been rising up the ranks in CS, making an appearance at the Katowice Major and following up some stellar performances. Most recently, the team took second at DreamHack Open Rio de Janeiro as well as qualifying for ESL One Cologne over Ghost Gaming. Some will go as far as to reference FURIA as the “next MIBR,” and that’s a notion we can appreciate.

This team is known for their explosiveness – pushing through smokes and putting the pressure on their opposition are all to be expected. While it may be a longshot to dub FURIA the victors in Dallas, we’ll take a conservative estimate and say they’ll keep things exciting.

Following three days of group play starting May 28, DreamHack Dallas will take to the arena in Dallas starting on May 31 to weed through the playoffs. You can catch all the action on Twitch.