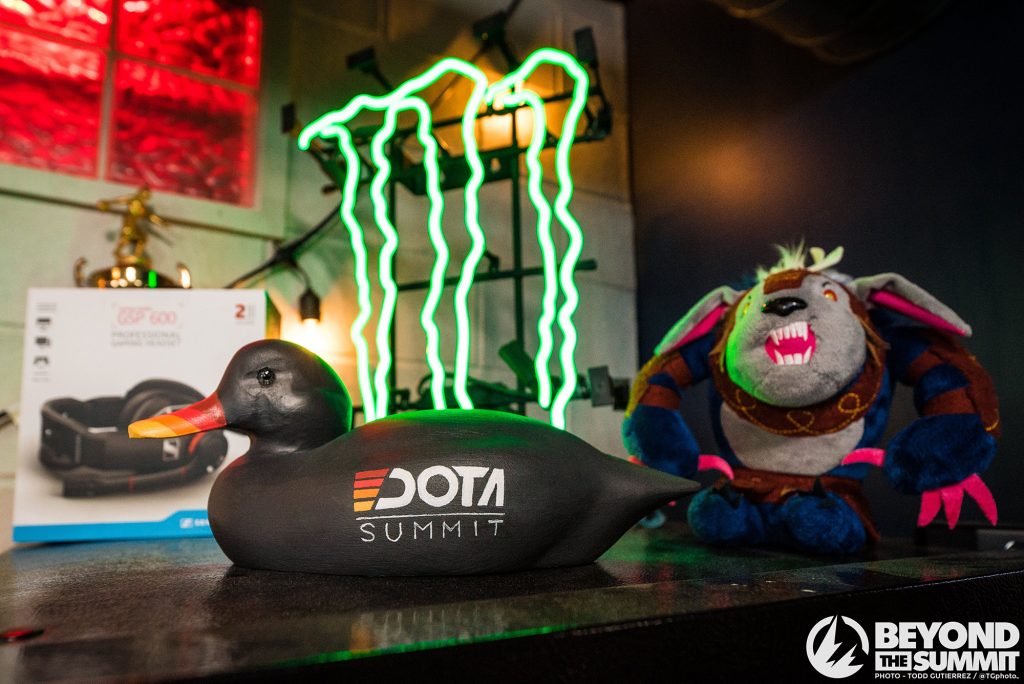 iG took down Chaos EC in the DOTA Summit 11 finals to earn a spot at the MLD Chengdu Major, and this handsome duck trophy (Photo via Beyond the Summit)

Just as quickly as it began, the first DPC Minor of the season is over. And after an amazing four days of games at DOTA Summit 11, we’ve got a much clearer picture of which teams are great, and which are… not so great.

Invictus Gaming, who won out in dominant fashion, is definitely looking strong. However, some teams didn’t meet their potential and others surpassed all expectations. But before we get into a full breakdown, there’s one pretty important question…

Was this really a Summit?

When DOTA Summit 11 was first announced, there were questions as to whether the tournament would retain the atmosphere which had made it one of the most unique events on the calendar. With a live audience, official DPC rules to follow, and the stakes upped considerably since previous editions, how could Summit keep its charm?

…This was his answer! 🤣 pic.twitter.com/b7dqGkkI1Q

It turns out, by retaining the same talent that makes Summit special every year, and still giving the leeway to be funny and entertain. Summit 11 definitely wasn’t exactly like it’s predecessors, but it recognizably a Summit event. And every audience question, hilarious post-match interview, or snide commentator remark made that abundantly clear.

The entertainment factor was there, the zaniness and humor was on full display, and once again, the Summit knocked it out of the park. An enjoyable experience for all… if you made it out of groups, that is.

While those of us watching at home were enjoying an incredibly entertaining event, for the four teams eliminated in groups, things weren’t going so hot. Especially if your name is paiN Gaming.

The South American team crashed out of the tournament, having lost every single game they played. The team relied on textbook, fundamental carry picks, and nothing worked. A Kunkka/Lina combo against Invictus Gaming, a smattering of Gyrocopter, but nothing worked. A last-ditch attempt to salvage their tournament with Weaver and Sand King did nothing but drag their final game out for close to an hour.

PaiN’s fellow Group A opponents, Ninjas in Pyjamas, didn’t fare much better. The team was much hyped heading into this event and, quite frankly, didn’t deliver. This roster has been practically untested, apart from a reasonably showing at DreamLeague Season 12. However, when stacked up against DPC opponents, the lineup couldn’t deliver, especially when faced with tournament favorites iG and the aggressive hyper-aggressive jfshfh178 roster.

#DotaSummit: A strong start for NiP as @Gunnardota finds early momentum and a kill on Palantimos!

Can they keep it up and snowball the game? pic.twitter.com/cBgoO44kIs

Across the board in group B, Ad Finem had their own struggles. The recently reformed Greek stack lost decisively against Geek Fam, but showed signs of life against eventual group escapees HellRaisers. Despite this, the team was unable to put a win on the board. And after defeating Ad Finem, Geek Fam looked poised to escape this group. But playing up to their role as tournament spoilers, HellRaisers also ended the SEA team’s run.

Climbing to the Summit

After cutting the tournament field in half, the four playoff teams remaining were the former Quincy Crew lineup of Chaos EC, the CIS upstarts jfshfh178, dominant Chinese stack iG, and the returning HellRaisers. Chaos EC would quickly send jfshfh178 to the lower bracket, in the same amount of time single games have taken this tournament.

On the other side of the bracket, iG struggled against HellRaisers, who put on an incredible show with Alik “V-Tune” Vorobey’s Gyrocopter dominating in game two with a 21/5/8 performance. But somehow, iG managed to get things together for game three and advance. There they faced Chaos EC and had a much easier time of it. In two games that were never really in question, Zhou “Emo” Yi showed off his Zeus and Puck and proved he’s just as effective bullying early in lane, as he is with a late-game nuker.

This set up for a Lower Bracket Finals between Chaos EC and HellRaisers. The NA stack had earlier fallen to iG, allowing the Chinese team to advance to the finals. Chaos EC looked in a desperate situation, especially given HellRaisers had performed much better than them against iG.

But in this game, it was simply a case of out drafting their opponents. In game one, Chaos EC picked up Gyrocopter and Shadow Demon for their carries, leaving HellRaisers to try and deal with the deadly late-game damage that Yawar “YawaR” Hassan and Quinn “Quinn” Callahan would be putting out. And in the deciding match, with the Gyro picked away and the Shadow Demon banned, the team went for a trio of Rubick, Faceless Void, and Zeus, all of which managed to quickly get fed, and dominate their opponents.

This set up for a thrilling rematch against iG, with Chaos EC having proven themselves the better tacticians against HellRaisers. But it turns out tactics mean nothing if your opponents are just more decisive, move around the map quicker, and also beat you in one-versus-one situations.

Game one of the finals was one of the quickest ones of the tournament, ending in just 23 minutes and saw Thiay “JT-” Jun Wen, the three position, stepping up and carrying on Timbersaw.

Game two wasn’t much better for Chaos. Even with many of the typical hyper-carries banned away, their opponents picked up a hard engage comp with Tiny and Magnus combined with three nasty carries in the form of Anti-Mage, Mirana, and Ogre Magi. In this game iG played with their food a little, and the game dragged. But eventually, in 34 minutes, they put their opponents down.

In the final match, Chaos EC finally showed signs of life. But it was too little, too late. Quinn desperately tried to carry his team with a stellar performance on Outworld Devourer. But his team was just too heavy. On-loan player Jonáš “SabeRLight-” Volek, and captain Avery “SVG” Silverman offered up a combined 25 deaths to their opponents, on the way to the team’s tournament exit.

After four huge days, we have our champions – @invgaming!

Thanks for watching #DotaSummit 11 and following us along the journey. Shoutout to all the players, team staff, talent, admins and BTS production for opening the DPC 2019/20 season with a bang! See you soon!

iG, the favorites to win this tournament, have matched everyone’s expectations. There were some shaky moments, particularly against stand-out team HellRaisers. Still, overall this is a scary Chinese Dota team that plays in a quick, decisive style that’s netted them £72,000, 140 DPC points, and a convenient trip back to the MLD Chengdu Major 2019, which starts next weekend.