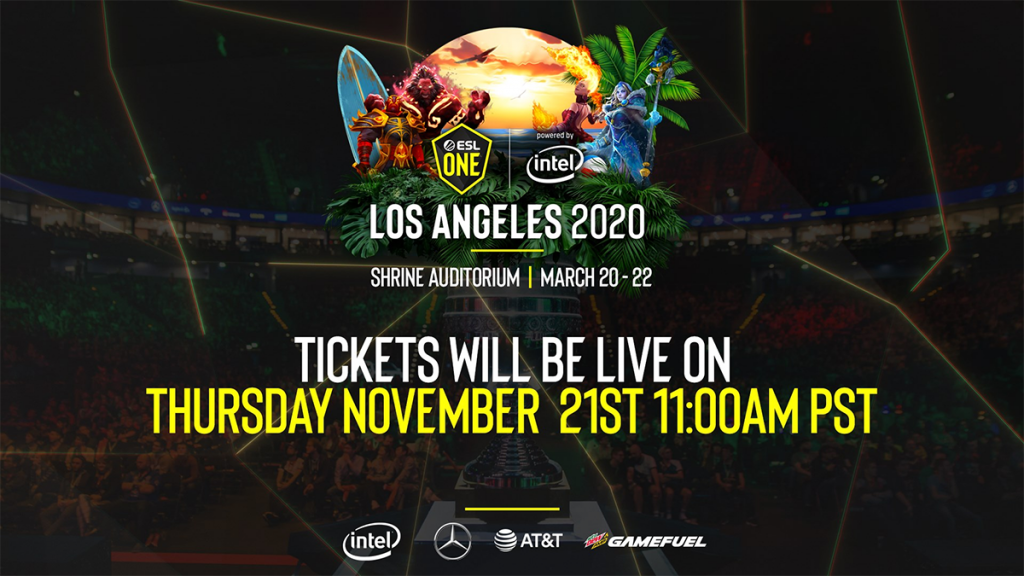 It’s time for a little more glitz and glamour in the Dota 2 scene, as the ESL announces its return to the Dota Pro Circuit with ESL One Los Angeles. Through March 20 to 22, 2020, the Shrine Auditorium in LA will host the third Major in the DPC, at a vital midpoint of the season. The news was officially announced today in a post on ESL Dota 2’s Twitter account, and with the launch of the event’s official website.

Grab your shades and get ready for Hollywood; #ESLOne is bringing the Dota 2 Major to Los Angeles in March 2020! 🎥

This is a landmark event for a number of reasons. It’s the first Dota 2 Major to be hosted in LA and the first time since 2016 that a Major Dota event has taken place in the US. The tournament also marks ESL’s first Dota 2 tournament on the West Coast as a whole, and the organizer’s return to the DPC after an absence since 2018.

Make a note in your calendars!
Tickets for the #ESLOne Dota 2 Major in Los Angeles will going LIVE on Thursday 21st!

See you in Hollywood! 😎

ESL One events have taken on a life of their own since absence from the DPC 2018-2019 season began. Starting from the first non-DPC event, ESL One Hamburg 2018, the series has prided itself on developing a fun, exciting, and fan-friendly atmosphere. After hosting incredibly popular tournaments across 2019 in Katowice, Mumbai, and Birmingham, the ESL One series makes its welcome return to the DPC.

As per all DPC Majors, ESL One Los Angeles will offer a $1,000,000 prize pool, and a share of 15,000 DPC points. But the winners will also have a chance to raise the impressive ESL One Trophy, which was last hoisted by TNC Predator at ESL One Hamburg 2019. To reach the tournament, teams will take part in online qualifiers starting February 9. From March 14, 15 qualifying squads, joined by the winner of the previous Minor, will battle it out for a chance to reach the main stage.

Like other ESL One events, ESL One Los Angeles is looking to create a unique fan experience, offering side activities, including signing sessions, an artist area, and more. As per the ESL’s official release, Tickets for the event will go on sale on November 21, 11 am PST, with prices ranging from $54 and $225. All the action will be available to be watched on ESL’s Dota 2 twitch channel. For more information about the event, and to keep up to date with any news, keep your eyes glued to ESL’s official event website.