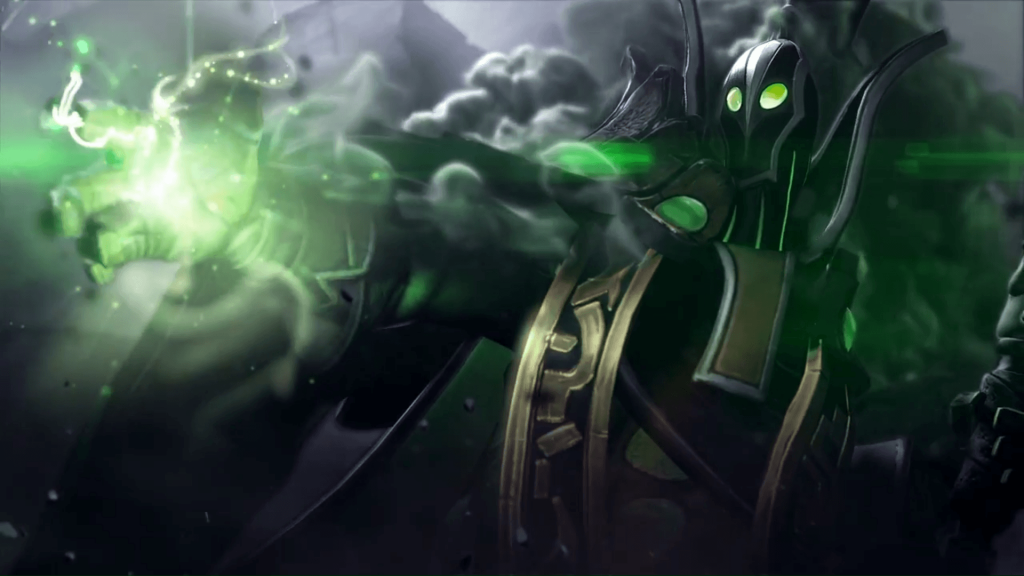 Aghanim, the father of hero Rubick, and original owner of Aghanim's Scepter, is one of the potential new heroes that the teasers hint at. (Photo courtesy Valve)

We may be in the midst of this year’s Battle Pass, with content dropping seemingly weekly, but that hasn’t stopped Valve from teasing even more. In a post made on Twitter on July 13th, spokesperson and Dota personality Wykrhm Reddy hinted at a new hero with a graphic and accompanying text. This in-universe quote from a character called “Grunch” describes the interdimensional nature of their “Captor” – A being seeking knowledge and strength.

The image and quote were also added to the game’s most recent patch, as can be seen on the SteamDB page, listed under files named “TI10_EventGame_TEASE.” The name would suggest a link to the Battle Pass Summer Event, which was detailed as one of the boons when the pass was released.

A few hours later, a second post was made, showing the familiar icon of the Aghanim’s Scepter, but with its crowning jewel shattered and light streaming out from the shards.

The in-game icon for Aghs has also been updated with this latest patch, showing the now broken version.

Several hours later, another pair of tweets suggested that it was a “Good day to buy a scepter,” and showing the item breaking even more. In addition, the in-game purchase of the item now caused a mysterious voice to play, chanting the word “scepter.”

This series of teasers have sent Dota 2 lore fans into bouts of wild speculation. Now Dota players have always known Aghs is broken (in one way or another). But the new image of the scepter hints at a few things we know from in-game voice lines and other sources.

In the Dota 2 canon, Aghanim was a powerful wizard and the father of hero Rubrick. He was incredibly strong, with abilities that made him close to being a demi-god. Aghanim then is just one of the lore personalities hinted as a potential new hero or focus of this summer event. After all, one of Grimstroke’s voice lines suggests that contrary to what other heroes believe, Aghanim might still be alive.

Besides this, the broken scepter’s image brings to mind a voice line from Spectre, who claims that the item holds the power of the “Ascendants.” These god-like beings are something that Spectre seems to be familiar with, and if the scepter is broken, then that power has escaped, empowering whoever wields it.

What’s more, with Mars, Zeus, and other deity-level heroes in the game, it wouldn’t be too out of place to have someone with godly abilities take the field. Given the nature of past Battle Pass game modes, such as Siltbreaker, having the player take on a creature of supernaturally strong nature is also an option.

Of course, all of this is pure speculation, and the Dota 2 team could be teasing something else entirely – from balance changes for Aghs to the Immortal Treasure II. What’s more, there’s arcana voting to be done, and these teasers could hint at a direction for the potential design.

But should this indeed be a hero or game mode, there’s plenty of lore to back up these ideas. To see the teasers closer, check out the high-res posts on Instagram.