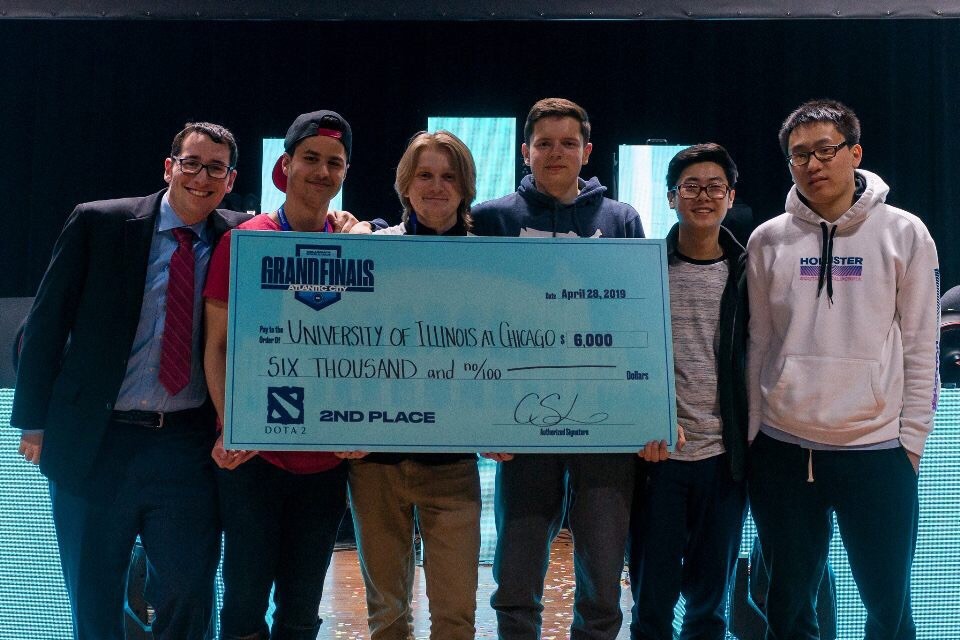 What does it take to (nearly) win the Dota 2 league run by Collegiate StarLeague? And what do university students get out of the experience, other than potentially a slice of US$50,000?

Those were the two main questions I wanted to address when I spoke this past week with Michael Lederer, the team coordinator for Dota 2 at the University of Illinois at Chicago. UIC placed second during last year’s event, and they’re feeling confident about their playoff chances this year!

Collegiate StarLeague (CSL)  is a North American organization that operates several different esports leagues. For Dota 2, CSL provides two tiers of competition for students. The catch? With very strict exceptions, teams can only be formed among students at the same university.

Lederer gave me a better sense of the recruitment process at his university. One of the benefits of CSL is the potential to find other local people who share your passion for an esport. Lederer explained, “One of the big hurdles is the recruitment phase: being able to get in front of people who play Dota, who don’t know that you’re looking for them…it’s really, really hard.” While larger schools have a bigger pool to draw from, it can still be challenging to find those players, to say nothing of the situation for universities with smaller enrollment.

The new season of CSL is upon us! We are actively recruiting students to help us bring home the $20,000 grand prize, as well as casual players to grow our community!

While he was barely able to pull together a team when he first started two years ago, this year Lederer’s group has swollen to include 50-60 people as he’s refined his approach to recruitment. In particular, Lederer had found the subreddit for Dota 2 useful for finding interested players. His team’s success last year also has surely helped, as he explained, “I think we are basically the biggest victory in our school’s esports history. There isn’t really that much esports history, but you’ve got to start somewhere.” His team undoubtedly got some attention last year by placing second in Collegiate StarLeague. That surely helps advertise the existence of the group and draw in new members.

So what to do if the problem is an abundance of interested players rather than having to scrounge for some? To fill out the team, Lederer’s process was to identify eligible players in the top skill bracket, and then he had them try out. “We tried them out individually with the team. We thought about who’s got the best mentality, who plays very well with the team.”

The emphasis on mentality and good fit could be especially important in this niche league because of the year-long commitment the team is making. But perhaps it’s something that’s overlooked by professional stacks, where it can sometimes seem players join and drop teams rapidly.

Once a school assembles a team, what’s the next step towards victory in Collegiate StarLeague?

Well, to start, there are two separate leagues operated by CSL: Star League and Open League. Star League carries the cash prize pool and permits only one team per school, while Open League allows for any number of teams.

Lederer pointed out that a new rule this year means “you can elevate players from [Open League] to [Star League].” And so with UIC fielding two Open League teams this year, they have a variety of potential back-up players should someone on their Star League team have to drop out.

We are heading into Game 3 between @DotaUIC + @RITesports in Upper Bracket #DOTA2 Grand Finals. Loser's Bracket will continue tomorrow so be sure to tune in!

The season for Star League this year begins October 19, with weekly matches (except over the winter break) until mid-February. Playoffs wrap up in February-April.

Even at the start of the year, Lederer identified motivation as a potential problem: “Keeping people motivated to want to play, because obviously school has to come first. You need to figure out how to balance that.”

The Star League team tries to fit in multiple scrims a week, ideally two, but Lederer says newer teams may want to have more practice. It can be a lot to balance with schoolwork and the other demands of academics (not to mention the distractions of new video games).

Lederer acknowledged that his team “doesn’t really feel the pressure yet,” partially because there’s only one new player on the roster. They’re confident that they’ll make the playoffs, which means there’s less motivation to really grind out practice now.

Of course, Dota 2 is an ever-changing game, so grinding out practice on the current patch could mean very little by the time playoffs come around.

What’s In It For Me?

One of the difficulties facing online Dota 2 leagues has always been finding and retaining teams. Professional events currently focus primarily (but not exclusively) on the qualifier-to-tournament format rather than a longer-term league. So what might appeal about CSL for university students?

To start, Collegiate StarLeague is designed entirely for university students. There are strict rules around enrollment for players. Games are default-scheduled for Saturday afternoons with a break to coincide with the typical winter break. And there is some flexibility in timing as long as both teams are amenable.

While players who feel they are good enough to compete professionally may prefer to try their luck in qualifiers for pro events, for the average, even above average Dota 2 player, the Star League is truly competitive. Lederer was on his school’s team two years ago, and he noted that at the time, as a 3K MMR player, he felt out of his depth. “I know how hard it gets. It really is a soft barrier if you’re not high enough MMR.” The Open League is much less competitive in that the prizes are computer peripherals, so there’s less pressure, less on the line for players. This provides flexibility for students who may want to just dip their toes into competitive Dota.

It’s time to take CSL to the next level. Introducing our new look!https://t.co/kIjnd6b1Bk pic.twitter.com/cTYEQhNNL5

Beyond just a chance to play regular, competitive Dota 2, there are valuable skills to pick up through the league (plus all the friends you can make along the way!).

Players undoubtedly improve from competing weekly as well as scrimming on a regular basis. And while they may not achieve professional-level mechanical skills, players can improve the quality of their teamwork and their ability to communicate. There are even the basic elements of time management being honed here. These are essential life skills that transcend Dota 2.

Beyond the players are people such as Lederer himself. Too often we focus only on player concerns! Coordinators are learning valuable lessons about communication, management and administration that can be applied broadly. It’s valuable experience. Skills developed as a CSL coordinator could easily be applied toward comparable roles such as professional team management. I did ask Lederer about his future in esports, and he was coy. “It’s a complicated question,” he asserted before explaining that he was obviously going to school, with aspirations in computer science. But Lederer did acknowledge that the longer he’s involved in esports, the more he considers the possibility of it.

It’s also important to remember that not everything has to be applied to a career. CSL provides a unique opportunity to unite university students around a common passion. The regular competition can unite fans as players, support staff or spectators, building a community around a favorite hobby.

That’s something to be valued, in and of itself.

You can follow the UIC team – and all the other competing squads – beginning October 19. Selected matches are broadcast by CSL on their Twitch channel.

Thank you to Michael Lederer for talking to us about his experiences with CSL. Good luck to him and the 2019-2020 UIC Star League team: