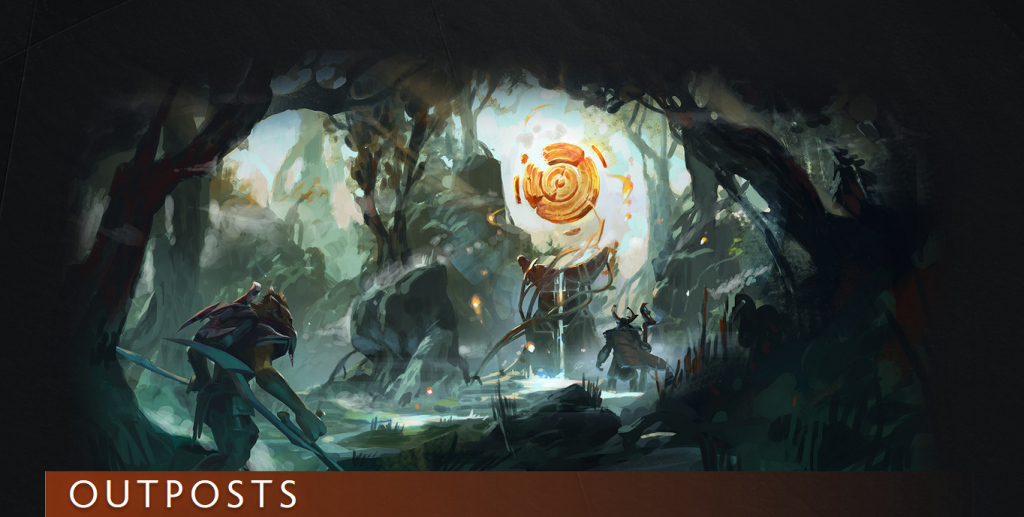 The DreamLeague Season 13: Leipzig Major is barely in the books, and right as Team Secret took the crown, Valve dropped a huge new Dota 2 patch in the form of the 7.24 Gameplay update.

In fact, keen eyed Dota fans will have noticed that the patch dropped midway through the Grand Finals, giving all those not locked in a battle for first place at a Major a few more hours with it. Joking aside, the patch has shifted a fair number of things and addressed some concerns with elements from the revolutionary 7.23 update that had started to materialize.

Shrines Out, Outposts In

Chief among the changes are the complete removal of Shrines. The building first added in 7.00 are now completely gone from the game. Valve had previously experimented with reducing the number of these buildings in 7.23e, but has now decided they’re just not worth keeping.

Their removal, along with the addition of outposts to both team’s primary jungles is a change to promote more conflict over vision. Each team now starts with all their side’s outposts captured, albeit with their vision halved. When they’re captured, they’ll drop a huge amount of XP, giving teams far better incentives to fight.

They May Be Neutral, but Balance Eludes Them

Another big change is a shift in neutral items. This category of item, introduced in 7.23, has been a contentious change to the game from day one. Neutral items are now some of the most sought after bits of gear in any given game, with a single Tier 5 item being enough to end a game in favor of your team.

Added neutral item tracking to @datDota, and reparsed all the matches since their introduction.

Simple interface for now, will add more if any good ideas come up.

To limit their massive impact on the game, heroes can now only equip a single neutral item. To balance this out you get handy dedicated neutral slot on your item bar, so that Apex you’ve lovingly farmed for is no longer going to burn a hole in your inventory.

Extra neutral items also no longer have to lie on the floor of your fountain while you’re waiting for them to be equipped. There’s a in-built team stash back at home which you can teleport the items too. This also stops sneaky opponents from rushing your base in a suicidal attempt to steal a pair of Force Boots.

Inhibiting the power and effect of neutral items seems to be the main focus of this patch. Along with your new neutral slot, backpack slots have been reduced but the total amount of neutral items that can drop for heroes has been increased by one to a total of four. As a bonus, drop chance and rates have been increased in several cases. Although not all of these changes seem to be working as intended:

Dota2 PSA:
don’t pick up neutral items with Meepo as 1 item counts as 4, and even if you give it away afterwards, the item count still shows as 4/4 received.

Of course there’s also been plenty of buffs and nerfs to heroes, with notably numbers taken off the likes of Doom, Ancient Apparition, and IO (all heroes that saw plenty of play at the major). What’s more, every single gold-per-minute talent has been removed, usually replaced with increased damage of some description. Despite this, not all support players are lamenting the loss of GPM.

Heyy… Forget what I said.. pic.twitter.com/QtnTfnlmGW

Items have, of course, been tweaked but far less than you would imagine from a patch focused on bringing neutral items into a more consistent level of balance. In many cases, numbers like mana costs or cooldowns have been increased, and damage reduced, but not by significant amounts. Phoenix Ash was also removed, while changes to Tangos, Mangos and Mango trees have reduced the overall sustain heroes potentially have available to the.

On first impressions 7.24 seems to be a complete retread of neutral items. But far from it, this is a committal to the idea that neutral items will now be a big focal point of the game. However, Valve has removed some of the negative ways the items were affecting matches. More cheesy elements, supports with far more items than their gold should allow, and other factors will have been reduced with this patch. As ever though, resourceful Dota 2 players will always find ways around these limits.

The full patch notes are available on the Dota 2 website.