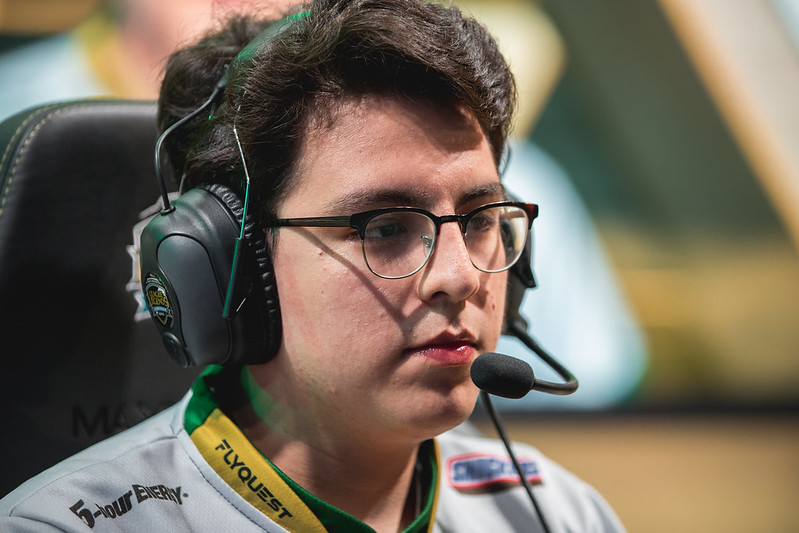 JayJ leaves the only LCS team he’s ever known to join Dignitas ahead of the Summer Split. (Photo courtesy Riot Games - LCS)

Dignitas has announced the signing of former FlyQuest support Juan “JayJ” Guibert. Dignitas also confirmed that JayJ would be the final addition to their Summer Split roster.

Our Summer Split roster is complete.

JayJ was originally scouted by FlyQuest while playing for the University of Toronto. JayJ and Toronto finished runner-up to Maryville University in the 2017 College Championship. FlyQuest signed JayJ in December 2017 and JayJ made his pro debut playing primarily for FlyQuest Academy. He was elevated to the LCS roster for 2018 Summer and held the starting role until Kim “WADID” Bae-in took over in 2019 Summer. He spent all of 2020 Spring on the academy roster while second-team All-Pro Lee “IgNar” Dong-geun started for the LCS roster.

With IgNar entrenched as the LCS starter, it makes sense for JayJ to move on from FlyQuest. He joins a Dignitas team that has put a high priority on having a 10-man roster with room to promote to the main roster. Zaqueri “aphromoo” Black started all 20 games for Dignitas at support in the Spring Split, but he could be nearing the end of his pro career. Both aphromoo and JayJ are signed through the end of 2021.

Dignitas should put a premium on their support role as star rookie ADC Johnson “Johnsun” Nguyen continues to develop. With aphromoo mentoring him in his debut split, Johnsun quickly became one of the best ADCs in the LCS. On a roster full of veterans, Johnsun should be the focal point of Dignitas’ building efforts for years. Bringing on JayJ now could put him in line to be Johnsun’s running mate for the foreseeable future.

JayJ has excelled on tanks in his career, having his best games on champions like Braum, Tahm Kench, and Alistar. That should pair well with aphromoo, who has preferred more playmaking supports in his career.

He also reunites with Dignitas assistant coach Gabriel “Invert” Zoltan-Johan. Invert was JayJ’s head coach at the University of Toronto and for parts of his time with FlyQuest Academy and FlyQuest. Invert will be familiar with JayJ’s strengths and should help ease the transition.

He will join top laner Omran “V1per” Shoura and jungler Joshua “Dardoch” Hartnett as new additions to the Dignitas roster.

The LCS Summer Split begins on Friday, June 12th. Dignitas will open their season the following day against Golden Guardians at 4 p.m. PST.