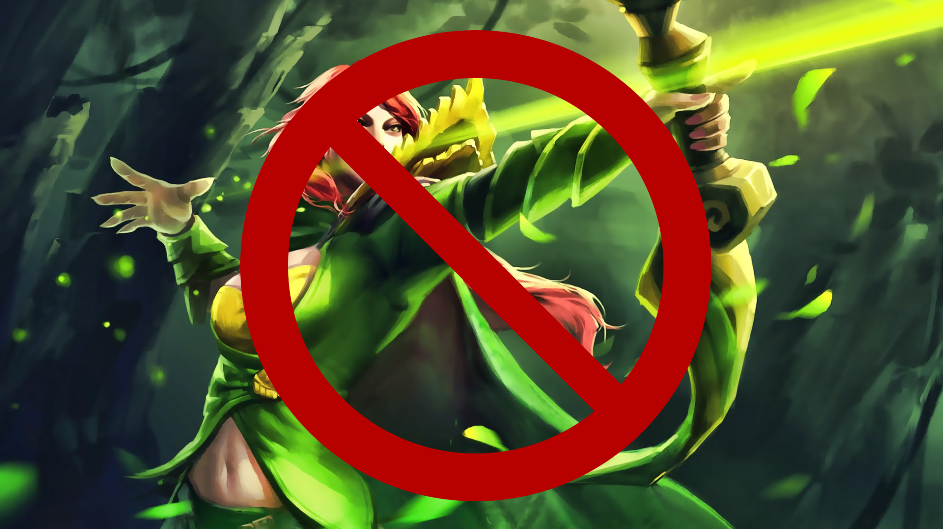 Windranger has all but disappeared from competitive play. Is SirActionSlacks to blame?

In SirActionSlacks’ latest YouTube video “Why I Hate: Windranger” the peerless Dota 2 personality, host, and content creator presents compelling yet humorous evidence as to why no pro team should ever pick Windranger again.

In the video, Slacks lays down the basics. Windranger is the 9th most picked hero in the entire game, and yet sits at a roughly 48% win rate across rankings, much lower than similarly highly played heroes such as Lycan and Io. What’s more, those heroes seemingly reward higher skill players with increased win rates, while Windranger does not. He even goes on to point out many competitive matches where picking Windranger has flat out lost team’s a series.

He posits a number of reasons for this including the inconsistent crowd control effects, the unreliability of her damage, the lack of mobility, and the psychological aspects of skill shots (dunking on League of Legends for it’s plethora of skill shot champions at the same time). Slacks ended on rallying cry to all pro and pub players: “Stop with the Windrangers.”

With the video first being released on April 24th, just as the WePlay! Pushka League was beginning, a curious thing happened. In the first week of play, Windranger was picked just twice and remained completely unbanned throughout. The hero had almost completely disappeared from pro play. It looked like the community and pro scene was taking note of Slacks’ plee. Afterall, his video amassed in the region of 200,000 views at the time of writing, making it one of the higher viewed videos on his channel. It’s not super far fetched to imagine that pros were taking note of Slacks’ rant.

In fact, it may not even be the first time one of Slacks’ videos affected the meta in a big way. Some have pointed to his video “Asshole’s Guide To Techies” as an inspiration for the infamous Evil Geniuses Techies picks. At TI5, on the grandest stage in Dota 2, EG used techies to cause havoc during the group stages, eventually drawing bans in the playoff bracket, and a ban in every game of the finals. The event accrued six months after Slacks released his Techies video, which quickly became one of his most viewed pieces of content ever.

Obviously, there are other possible explanations for EG’s Techies pick. Alexander “RobotVice” Dager (Peter “ppd” Dager’s brother) had in 2015 risen to prominence as a notorious Techies main. Meanwhile, EG member Kurtis “Aui” Ling’s famed paranoia over Techies resulted in him contacting RobotVice to learn the hero specially for the tournament. Ironically, leading to one of the most vocal opponents of Techies to become known as the man who won TI thanks to the pick. Slacks’ video tapped into a wider feeling in community: That Techies was broken and was incredibly dangerous in the wrong hands.

you can win the biggest tournament of all time but they still hate you for being a techies picker @Aui_2000 when will the world LEARN?!

But even so, it’s hard to deny the influence of a video with half a million views. If Asshole’s Guide To Techies influenced pro play, then there’s no reason why I Hate: Windranger couldn’t do the same. After all, after the video was released, Windranger’s pick rate only increased, with her win rate plummeting. It’s definitely having an effect on pubs, why not pro play?

So has this video killed the hero once and for all? Or was she already on the decline? Looking purely at pro pick rates, it looks like the boat sailed for Windranger long before Slacks’ damning tear down of the hero. Despite hundreds of matches played at the recent ESL One Los Angeles Online set of events, Windranger was picked just nine times, and maintained a similarly dismal win-rate to the 48% that Slacks mentions in his video.

Even famed Windranger pickers Team Nigma have all but abandoned the hero. Aliwi “w33” Omar, a player who’s well-known for his Windranger has soured on the pick. In 2019, it would have been easy to characterize the then Team Liquid lineup of being fairly one-dimensional. The team would pick Windranger for w33 and then sees if he can win the game for them

But Nigma has not picked the hero since January, with her last outing at the WePlay! Bukovel Minor. Although the hero performed fantastically there, with winning performances on all six of her games for w33, after the event she was ditched, and not played since.

So what’s happening here? Have pros already seen many of the issues that Slacks suggested and left for greener pastures? Or has the meta shifted so much that a carry like Windranger just isn’t viable.

After a reshuffling of talents and a new Aghanim’s Scepter power up in 7.22, Windranger was positioned to be the dominant carry hero that everyone knew she could be. But that was May 2019. Since then, with relatively little modification, the hero has been simply underwhelming. Another shuffle of talents in 7.23 halted Windrun’s invisibility granting ability until level 25, and since then the hero has barely shifted.

Instead of her becoming weaker then, it’s the rise of heroes that do everything she can far better. Windranger’s high-risk high-reward playstyle is far better executed by a Meepo. She’s outscaled by an Alchemist, even though that hero has also fallen out of favor, and she doesn’t provide half the utility of Void Spirit, or Fire Spirit for that matter.

Team Nigma’s w33 even found solace in Lina, another skill-shot focused hero that just happens to be far better at many of the things people pick Windranger for. With that hero’s hard stun, attack speed buff, and nuke potential (all features Lina shares with Windranger), it’s understandable why the fiery mage is a preferable pick to the elven archer.

Ultimately it seems like Windranger has a lot more problems than patches and stats. The turn against the hero has been building for some time now, and pro teams have likely gone off her for the foreseeable future. Perhaps like with his Techies video, Slacks had tapped into the community zeitgeist, the collective unconscious of all Dota 2 players. He manifested and put into words something we’ve all known, from pubs to pros, for a while: That Windranger sucks.

In order to bring this maligned hero back into the fold, it’s going to take a lot of effort. Buffs would help, but that won’t solve many of the core issues Windranger has. A soft rework of kinds would perhaps be the best solution, but even then, with opinion against her, the elven archer has a long way to go until her reputation is restored.

As for SirActionSlacks… He has his eyes on yet another target it seems.