Dicey: “We Just Stepped Up and Were The Better Team” 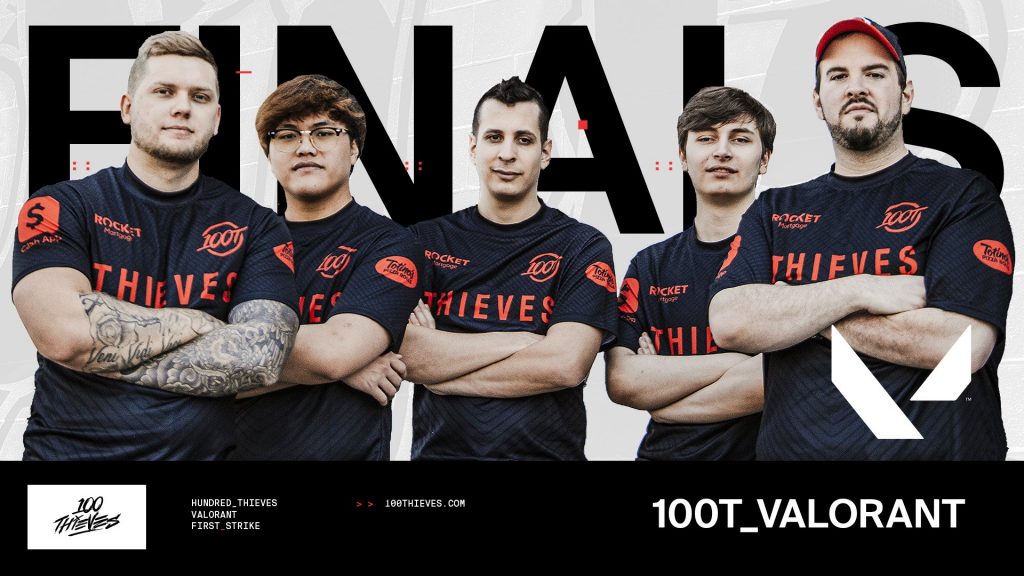 100 Thieves will move on to face Sentinels in the semifinals. (Photo courtesy 100 Thieves)

100 Thieves faced T1 in an intense match up that resulted in one of the best series so far in the VALORANT First Strike: North America tournament. T1 maintained a steep lead in the first half on Haven, but 100 Thieves pulled off an amazing comeback to win the match. The team maintained its momentum in the second game and eliminated T1 from the tournament. Hotspawn spoke with Nick “nitr0” Cannella and Quan “Dicey” Tran, who explained how the team maintained composure during a challenging situation and how they focused on themselves when preparing for the match.

Hotspawn: T1 managed to pull ahead in the first half on Haven. How did you maintain your composure when you were down?

Dicey: I didn’t get a hot start off the bat, so my mentality was to be more of a team player and not to take too many angles or fights because I clearly wasn’t on point that first half. I was more calming and tried to use my utility better to help out the team.

Nitr0: The first half was rough, and they were playing very well. I don’t think we were playing our own game; we were playing kind of scared in the beginning. Maybe because it was the first match in the tournament, but we eventually started adapting on the defense. We knew if we won the pistol round, we were probably going to at least make it closer because we are more confident in our defense on that map. I’m not going to say we weren’t scared on our attack; we definitely were. But we definitely were resilient on our defense.

I knew that as long as I can help out the team and support the veterans, then we can win.

Hotspawn: Dicey, you are one of the younger players on the team. During tough situations like that, do you lean on the veteran players, and what is that dynamic like?

Dicey: When I have a slow start, I try to not let it get to me too much because I know I have three very high class and experienced players on my team. As long as I try to do my job to the best of my ability, they will always step up and take over, and we can perform and win. It wasn’t really that hard to get back in the groove and not get tilted because I can lean on them as teammates.

Hotspawn: Did the comeback give you a motivational boost going into the second map?

Nitr0: One hundred percent. Whenever you have a good momentum going into the next map, you definitely carry it over, especially in VALORANT. I feel like more so in VALORANT than CS, and us having the comeback probably even had more motivation than if we rolled them 13-2. We played more rounds and had to communicate more, so we were more accustomed to the overall feel of the match.

Dicey: After the first win, I was really pumped, and everyone on the team was pumped. For me, personally, it did carry over but not too much because I knew I didn’t contribute that much. I knew that as long as I can help out the team and support the veterans, then we can win. Going into the second game, I wasn’t too tilted or anything, and I just did my job. We had some insane plays, and our aim was on, and we managed to take the map.

Hotspawn: Was there anything specific that T1 did that threw you off your game, or was it just the way the match played out?

Dicey: Nothing they did really surprised us, but they did play really well. Their aim and strategies were really good, but in the end, we just stepped up and were the better team.

Hotspawn: What are your thoughts on Skye, and do you think she will ever be viable?

Dicey: I personally don’t think Skye is good at all. There are so many other characters out right now that are good and do her job better than she does. Her kit isn’t that good, and she is just easy to counter and play against. I don’t really think she is going to get into the meta anytime soon.

Nitr0: I think every time a new Agent is released, you look at it as an opportunity cost. You want to see what Agent you would be giving up for that Agent. Whenever I see Skye, I think of who she would replace, which would most likely be Sova. I still think Sova is way better, and I also think the flashes are pretty bad, considering you need to have them in your hand. Breach can flash and run up with their teammate, and I think Sova’s drone is 100 times better than Skye’s wolf. Ability for ability, I think Sova is way better.

Hotspawn: Do you think Icebox is a good map for competitive play?

Dicey: Icebox is actually a really fun map, and we have strategies revolving around that map. If they pick it or we end up playing it, I feel like we would have a really good chance of winning. We’re not really afraid of the map, and if they pick it, we don’t mind at all.

Nitr0: I don’t think it’s a good map generally, but it’s a map that we have to play. I think whenever a new map is released, you have the opportunity to practice it. Using Split as an example, we are a new roster and are pretty far behind on it, so we’re going to try Icebox. I think we are a little bit ahead on Icebox, so I think it was really good timing for us with the new map release, considering other teams in the tournament have been together for way longer.

Hotspawn: Dicey, as a young player, what are your thoughts on VALORANT potentially shifting towards a CS style meta?

Hotspawn: Do you have a game plan for your match against Sentinels?

Dicey: Our game plan is the same thing we did today, which was just focusing on us. If you try to study the other team too much, then your playstyle starts to revolve around them. You become uncomfortable with the way you play because you’re not used to it. Tomorrow we will just focus on us, our aim, and our strategies. At the end of the day, if we do that correctly, we should just take the map and move on to the grand finals.