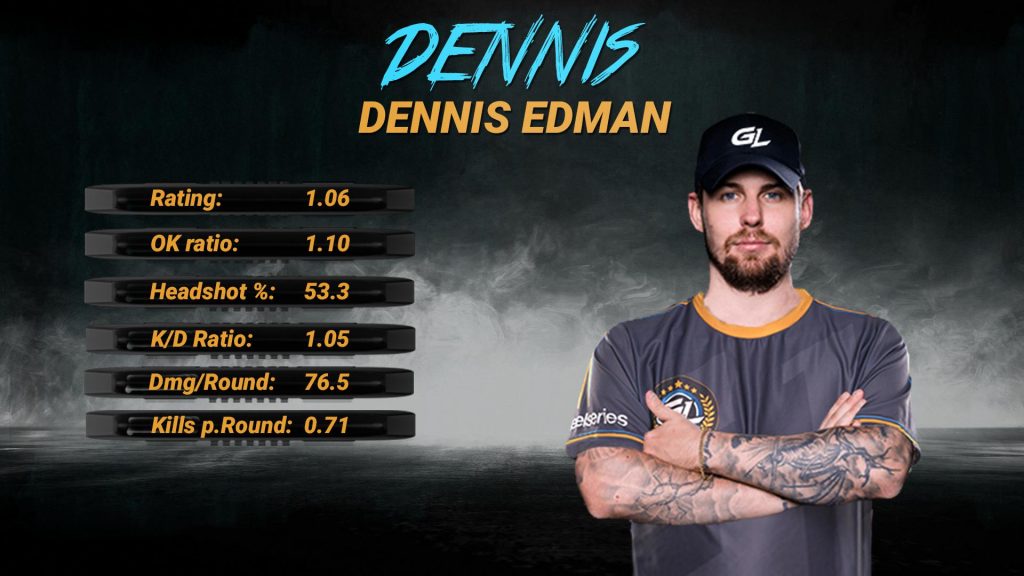 Dennis "dennis" Edman comes to GamerLegion with some impressive stats. (Image via GamerLegion)

Excited to grind with such talented players. I believe this is the right path for me as a player even tho some might see it as a step back. Also for all of you wondering, @hampuscsgo will be the IGL. 🔫🔫🔫 https://t.co/GN1YgLUEMG

GamerLegion was reduced to four players after moving its Belgium in-game leader to an inactive position on Thursday; this move made room for dennis, whose position on the starting lineup is effective immediately.

The Swede had been sidelined by NiP since mid-June. Personal complications had seen him out of the active rotation for a brief stint before being fully replaced by 17-year old talent, Nicolas “Plopski” Gonzalez Zamora. According to HLTV, dennis was released from his contract with NiP, allowing him to join GamerLegion free of any buyout negotiations.

The European band will debut dennis as part of its new roster next weekend at Good Game League in Poznan, Poland, on July 13-14. GamerLegion will compete alongside HellRaisers, Aristocracy and HellRaisers in Group A, while the tournament will additionally house big names such as Virtus.Pro, G2 and Winstrike.

As for Ex6TenZ, the order to move onto the bench ends a roughly three-month term with GamerLegion and is met with mixed emotions. The IGL whom helped the team achieve a third-place finish at United Masters League in March shared his thoughts in a TwitLonger:

“The situation is not easy to summarize but let’s say that we had a lot of internal problems lately due to [differing] reasons. Ex6TenZ says. “The mood of the team was really bad lately and a change was needed to keep the team alive. I could do better sometimes at leading or playing individually but in general I know I helped the team to be better and I’m still proud of our progression since the beginning of the project.”

With dennis, GamerLegion’s active lineup is as follows: