Denial Esports Returns to CSGO, Acquires Most Of Bravado Gaming 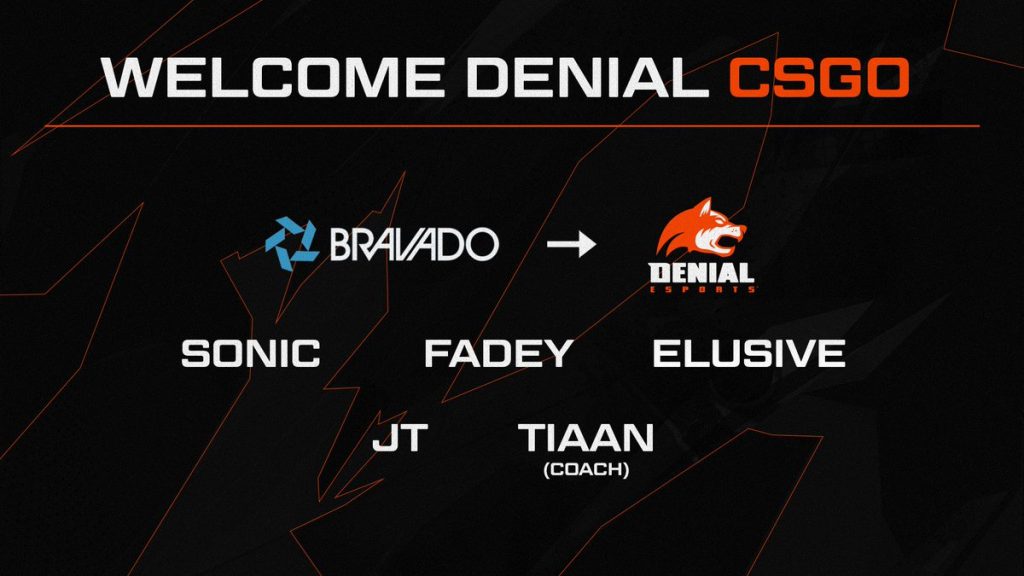 Denial Esports has acquired four-fifths of Bravado Gaming’s CS:GO team, marking a return to CS:GO for Denial after leaving the esport in September 2017.

Denial Esports has acquired four-fifths of Bravado Gaming’s CS:GO team. This marks a return to CS:GO for Denial after leaving the esport in September 2017. Even the squad’s coach, Tiaan “TC” Coertzen, transferred to Denial. Only captain Dimitri “Detrony” Hadjipachali remains with Bravado.

Welcome Ex-Bravado roster to the #WolfPit

We don't mind paying extra for the guac 🥑 pic.twitter.com/U3BevTZMmc

The Bravado squad had moved from South Africa to the United States early last year in order to gain some international experience. They’d initiated an Indiegogo campaign in order to help fund the effort, dubbed Project Destiny. The organization addressed dismantling the project in light of the roster pick-up in a press release this morning. They assured donors that money would be refunded, and reiterated how proud they were of everything the team had accomplished in such a short period of time. The team had most recently won the DreamHack Mumbai Invitational 2018 at the end of December.

We're sad to announce that #projectdestiny has come to an end. Read the full press release here: https://t.co/p3XuQ2lYv7 #bvdgaming pic.twitter.com/5p8QCcFcRT

Bravado intends to continue to establish “world-class Counter-Strike team internationally while simultaneously working on a variety of projects impacting the social and competitive gaming scene throughout South Africa and various parts of the world.”

Meanwhile, Denial Esports underwent a change of ownership in December 2018. There had been accusations of outstanding debts, which muddied the relaunch, but the org quickly made it clear that they were paying out the money the previous owner owed players. Denial has since picked up rosters in Halo 3, PUBG and Gears of War,  as well as signing a collection of streamers. They’ve repeatedly teased announcements for Call of Duty and indicated an interest in Fortnite players.