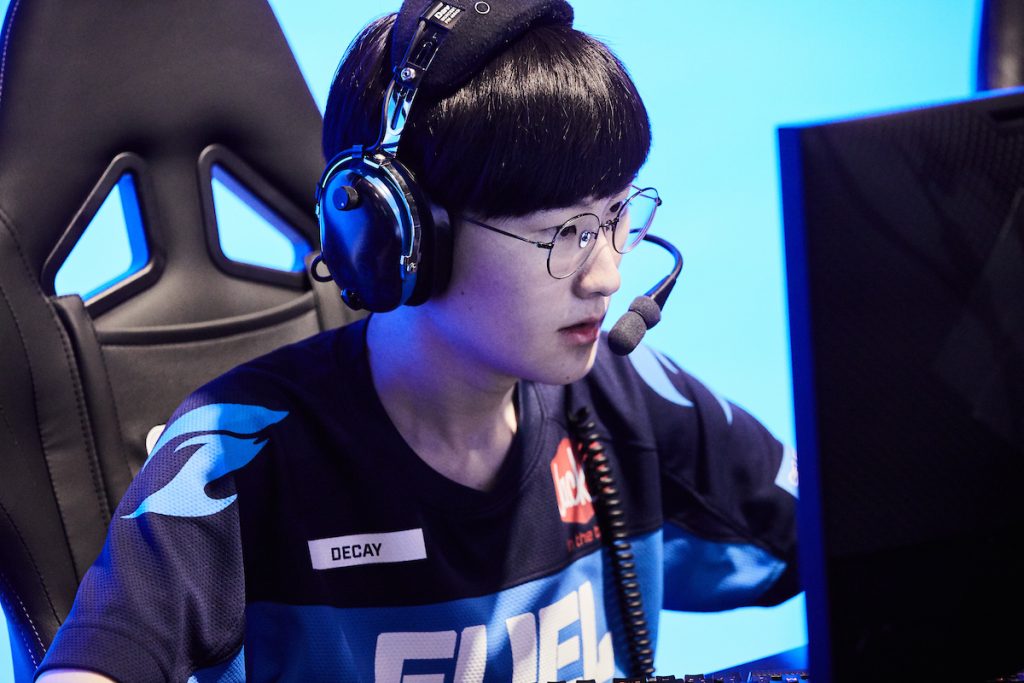 Decay has been increasingly inactive over the past several weeks, leading to rumors that he benched himself with the intention of eventually moving over the VALORANT. (Tyler Demogenes for Blizzard)

The Dallas Fuel announced on Monday that they have granted Gui-un “Decay” Jang’s request to be released from his contract early. His contract was originally set to expire in a couple of months at the end of Season 3. The DPS player has been an essential part of the Fuel’s game plan this year, with the team even going as far as building many of their team compositions around Decay’s specialty of Tracer earlier in the season.

We have granted the request of Gui-un "Decay" Jang to release him from his contract prior to the end of the 2020 OWL season. Our management is focused on evaluating changes and building a cohesive team that will be positioned for future success.

Although the Fuel agreed to release him from his contract, the split is not as amicable as their initial Tweet might lead one to believe.

Mike Rufail, the owner of the Fuel’s parent company Envy Gaming, explained in a Twitter thread: “Decay had a few months left on his contract, but refused to work with our staff. When a player refuses to practice, it is time for us to move on and give our players their best shot. Decay is obviously a great player, but he didn’t fit into our team and didn’t cooperate with the goals of our staff.”

Despite his elite DPS skills, Decay has been increasingly inactive on the Dallas roster over the past several weeks. Atlanta Reign’s Head Coach Brad “Sephy” Rajani even went as far as suggesting that Decay benched himself with the intention of leaving the Overwatch League to play VALORANT. After today’s announcement, it seems clear that at least part of that rumor was true.

The Fuel signed Stefan “Onigod” Fiskerstrand in June. Initially, most people assumed that Dallas acquired Onigod to replace DPS player Zachary “ZachaREEE” Lombardo, who left the Fuel in early June to pursue a career in VALORANT. However, it quickly became apparent that Onigod was being trained to replace Decay instead.

Onigod has been the Fuel’s starting DPS ever since he was signed, including competing in the Summer Showdown tournament, while Decay has been “on the bench”. In hindsight, the decision to play Onigod over Decay was likely driven by the Fuel’s desire to bring Onigod up to speed before Decay’s planned departure.

Decay has been involved in the professional Overwatch scene since 2017. He started his Overwatch journey competing for South Korean Overwatch APEX organization, Team KongDoo Uncia. He soon left that team to join their sister organization, Team KongDoo Panthera where he competed in both Overwatch APEX and Korean Contenders. In October of 2018, he was signed to the Los Angeles Gladiators, with whom he competed throughout OWL Season 2. After Season 2, Decay was traded to the Dallas Fuel, where he has competed ever since.

Unfortunately for any OWL teams who would like to add Decay to their roster before the playoffs, the trade deadline for Season 3 expired on June 15th. If he ends up sticking around the Overwatch League, he won’t be able to compete for any teams until Season 4. However, it is likely that Decay will switch to VALORANT, since he has been playing VALORANT since its release.

Along with Decay’s release on Monday, the Dallas Fuel also released Assistant Coach Louis “Tikatee” Lebel-Wong, who was with the organization for two years.

Today, we part ways with Assistant Coach Louis “Tikatee” Lebel-Wong. We thank him for his dedication and commitment to our players throughout his two seasons with our organization. pic.twitter.com/7FBYhXJ4V9

The Dallas Fuel will face the Washington Justice in the Knockout Rounds of the Countdown Cup on Friday, August 7th at 4:00 p.m. PDT.