Dallas Empire Have “Secrets Up Their Sleeve” For CDL Playoffs 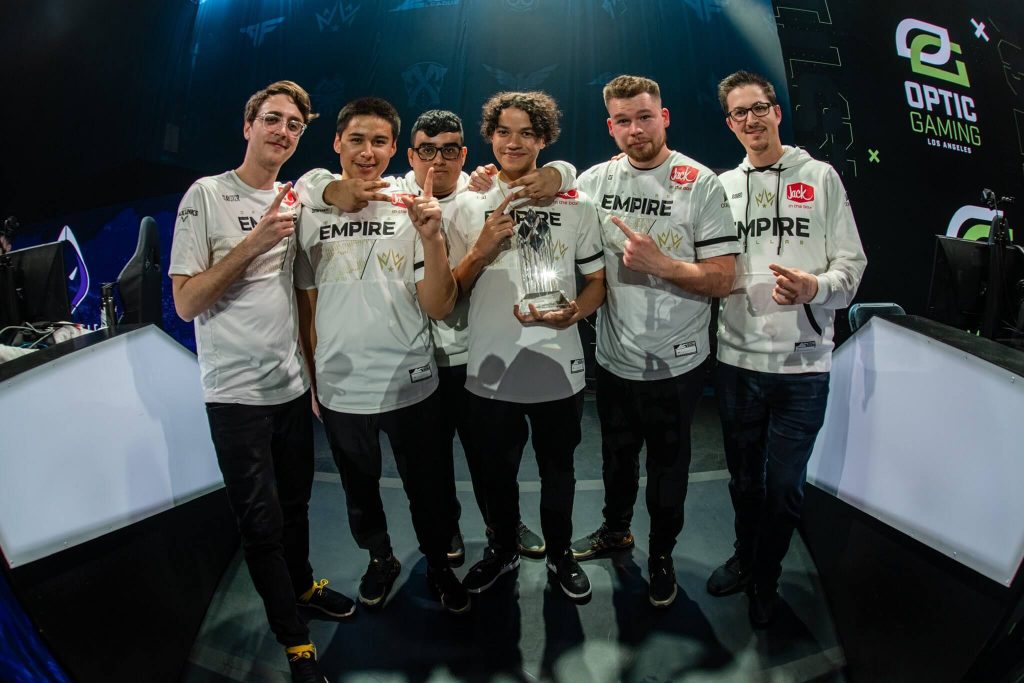 The Call of Duty League playoffs are in full swing, and the top teams are ready for their time on the mainstage. The Dallas Empire entered the playoffs in the second seed and are excited to face any team that gets in their way.

Anthony “Shotzzy” Cuevas-Castro, Cuyler “Huke” Garland, and Coach Ray “Rambo” Lussier recently provided insight into their predictions for the early rounds of the winner’s bracket, how they have prepared for the playoffs and their thoughts on what needs to change before next season.

The Dallas boys believe that Florida and Toronto are evenly matched and will have trouble beating each other in the second round of the winner’s bracket. Rambo explained that the match could go either way and will be entertaining for fans. “It’s 50/50 at this point with how Toronto has been playing lately and how Florida has been on a slow decline towards the end of the year. It’s going to be a good match up.”

Huke also confirmed that both teams are talented, but he does not see Florida performing well enough to beat Toronto. Regardless of whoever Dallas faces in their first match of the playoffs, they still have something to prove against both teams. Rambo elaborated on how Dallas is looking forward to playing either team for different reasons: “We’ve got something to prove on both sides. We’ve had Florida’s number the last few tournaments and lost our last match against Toronto. We want to turn that around and show it was a fluke. It really doesn’t matter; we are looking forward to playing both.”

Dallas Empire knows that they have a hard road ahead of them, however, and spent the time before the playoffs focusing on improving their fundamentals to become a better team. Huke confirmed that communication is key to performing in competitive matches and that Dallas has focused on improving this aspect of their game. Rambo also revealed how they focused on specific modes and maps to avoid relying on the same map picks that they used during the regular season. “I feel like we’ve added to our Search and Destroy map pool,” he said. “We’ve been practicing a lot more than we have in the past to try and figure out ways to eliminate our weaknesses in certain maps. Other teams caught on to the maps we would veto, and what maps we prefer to play, so we have been focusing on fixing this problem. We definitely have a few secrets up our sleeves for Champs to make sure we’re not expected to play certain maps at certain times.”

One significant issue that has impacted the Call of Duty League during playoffs is connectivity issues for players. Two players have lagged out of two separate matches, which left their team at a disadvantage. Players and fans all agree that this type of problem should not be happening in the biggest tournament of the season, but is an unfortunate reality of the situation. “It’s a reality that we all have to deal with given the times,” said Rambo. “The League has done what they could to make things as fair as possible. There have been some ruling changes to kind of abide by that, but we’re also doing everything on our end to avoid those issues and have potential fixes if that were to occur. But, it’s just a reality of the matter that some people don’t have anything better to do. All of the guys are just focused on playing, granted if it does happen, it might change their perspective on things, but we’ll deal with that if it happens.”

When it comes to next year, the Empire, like other teams, would like to see the league return to LAN with a structural change to the regular season. Rambo, in particular, use the CS:GO competitive format as an example of a structure that helps divide the excitement throughout the entire year and does not focus solely on the final event.

“I feel like there are a lot of things that could be done with the format,” he said. “I’m not going to say it’s stale, but the fact that only eight out of 12 teams compete at every event, it adds a little spice to some events while others are not as enticing to watch. I would like to see a format similar to Counter-Strike. They have a lot more matches and events during the year, but they have three or four specific events called Majors that every team gets to compete in.”

When asked if they would consider living in a bubble next year, Rambo revealed that it was considered for this season. “We were all really looking forward to that being the case for Champs this year. Almost every team in the league was not looking to play online, and everyone was willing to see what we could do to make it work. At the time, it didn’t seem feasible to do so, and it’s kind of out of our control. I can probably speak for all the players when I say that we would rather be playing on LAN instead of online for Champs.”

Other players, not just the Empire, have confirmed that they would be open to competing in a bubble but understand that it is an expensive option and would not work for all players. However, if issues continue to impact online play next season, another option will need to be considered.

The Dallas Empire will face the Toronto Ultra on Saturday, August 22nd, at 4:30 CT. You can watch the action live on the official Call of Duty League YouTube channel.