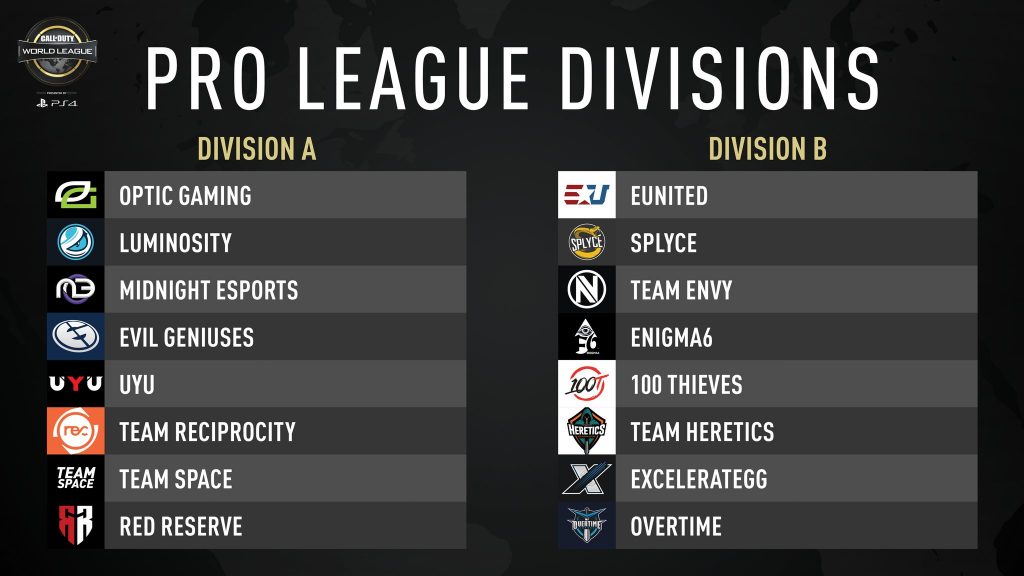 Four final teams qualified for the 2019 Call of Duty World League (CWL) Global Pro League. Excelerate Gaming and Team Space earned their spots through the upper bracket of the Playoff, with Red Reserve and Overtime eSport going through in the lower bracket.

The 2019 season of CWL Global Pro League features sixteen teams competing beginning February 4 for twelve weeks for the $2,400,000 (USD) prize pool. This includes a $2,500 bonus for each win during the Regular Season.

Teams will be divided into two Divisions, and ranking in those Divisions at the end of the season will determine whether the team moves directly into the Playoff Bracket or whether they will need to try to qualify for the Playoff through a Play-In Bracket.

Presenting the official divisions for the 2019 #CWLPS4 Pro League! Tune in beginning February 4 as the 16 top teams in the world go head-to-head in daily competition. pic.twitter.com/MtTC9VkkvM

The other twelve teams that previously qualified include OpTic Gaming, eUnited, Splyce, Luminosity Gaming, Enigma6, Team Envy, Midnight Esports, Evil Geniuses, Team Reciprocity, Team Heretics, 100 Thieves and UYU.  Only four teams of the sixteen come from outside of the United States–Team Reciprocity and Red Reserve are English, Team Heretics are Spanish and Overtime eSport are French.

This is the fourth season of the CWL. Matches will be broadcast live from MLG Arena in Ohio, Columbus on twitch.tv/callofduty.