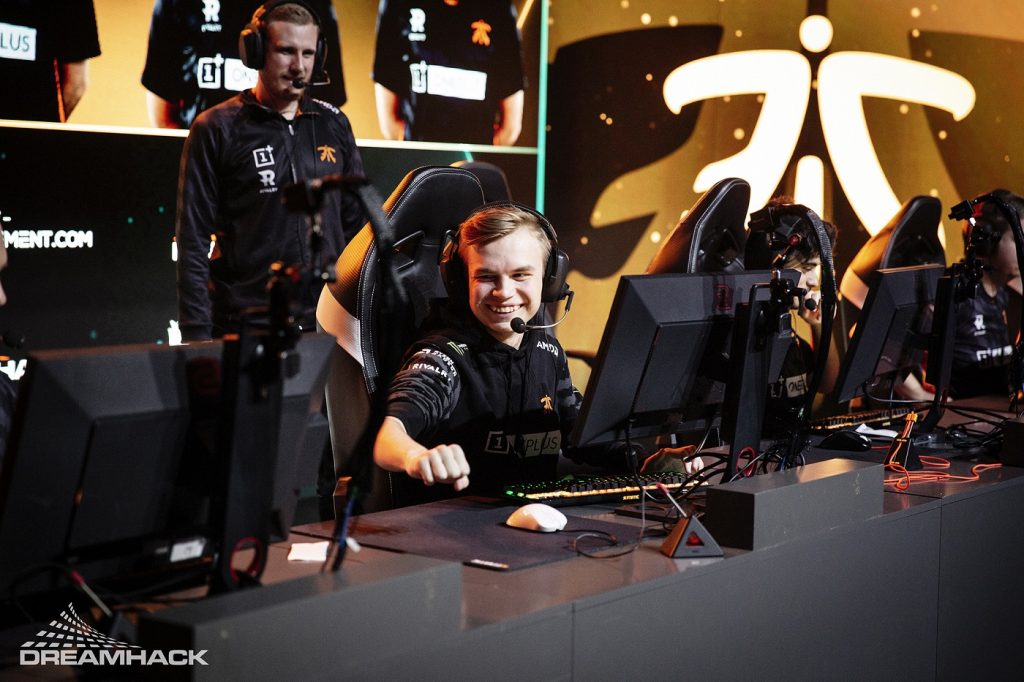 Fnatic continue to show up, winning their bracket in ECS this week. (Image via DreamHack)

The Esports Championship Series (ECS) Qualifying weeks have come to a close. The final two bracket winners have taken their US$12,500 prize and punched their tickets to the ECS Finals in Arlington, Texas later this month. This week was the last chance for a spot at the LAN, so every team came equipped and ready to play.

Fnatic’s first match was against last week’s runner-up in Berlin International Gaming (BIG). The first map of Inferno started out close. After an 8-7 CT half, Fnatic swapped to T side and found momentum. They took the first four rounds and four more sprinkled around for a 16-11 win.

That momentum carried over onto Train, BIG’s map pick. Fnatic went on a T side tear, taking a 10-5 lead at the half. While BIG started to mount a comeback, Fnatic stabilized and closed out the map again with a 16-11 scoreline.

The Swede’s next opponent was Tricked, who just took out North. Tricked chose Nuke for the first map, which Fnatic obliged to. Fnatic won the first seven rounds in a row and took the half with a dominant 11-4. Jesper “JW” Wecksell’s dynamic AWP play helped Fnatic to shut Tricked out of bombsites.

Tricked did show why they picked Nuke, taking the first six rounds of their own CT side. However, Fnatic’s offense was able to find success, resulting in a 16-13 map win.

Fnatic once again chose Inferno, but their CT side looked rough this time around. After numerous failed defenses, Fnatic went into the half trailing 6-9. This would be remedied by their astounding T side. Fnatic either killed all of Tricked or planted the bomb in all twelve rounds. A 16-11 ending saw Fnatic advance to the finals.

Their final match would be against Virtus.pro who previously took out the powerhouses of mousesports and FaZe Clan. On Overpass, Fnatic set an average 9-6 CT half. Their T side showed perfect ability to take bombsites, once again never failing to get to one. Fnatic went on tournament point after a 16-8 map one.

Virtus.pro’s last chance came on Mirage. However, Fnatic was ready for this map as well. They once again showed off a great T side, taking an 8-7 lead at the half. On their ensuing CT half, Fnatic shut out Virtus.pro from anything and everything. Fnatic won eight rounds in a row to close out the map and take first place.

Fnatic have been on a roll recently with a win at DreamHack Malmö and a runner-up at StarSeries & i-League Season 8. Now, they have a chance to keep rising through the rankings at yet another high-profile international LAN. Their arrival should make everyone there nervous.

MIBR Make it Through

MIBR’s quest for qualification began against The Quest. The upstart North American squad started by picking Vertigo. Due to unfamiliarity with the map, MIBR dropped the ball. After an uninspired 6-9 T start, The Quest were able to overpower MIBR and take map one 16-11.

Onto more expected turf, MIBR started out their Mirage CT side with a 9-6. Their T side pattern also mirrored last map, allowing them to take their own 16-11.

Overpass served as the tiebreaker, and MIBR wouldn’t let it slip away. A strong 10-5 T side made way for the Brazilians to clean up The Quest and take the map 16-8.

MIBR’s next test was against ATK, who have placed second at two ECS brackets already. Again picking Mirage, MIBR put up a standard 8-7 CT half. ATK fought back, putting up an 8-7 half of their own. One overtime was not enough, as both teams refused to go down. Eventually, MIBR edged out ATK, taking map one 22-19.

Now on ATK’s map of Inferno, MIBR looked to close out the series. The first half remained fairly close thanks to the efforts of Josh “oSee” Ohm, who top fragged the server.

Despite an 8-7 start, MIBR’s ensuing T side was unstoppable. They took all but one round in the second half, closing the map out 16-8 and advancing to finals.

Their last opponent would be eUnited. Their map pick was Overpass, which they did look adept on. Winning eight of the first eleven rounds, eUnited went up at the half from T side. After taking the ensuing pistol round and the freebies that come with it, eUnited closed out 16-11.

With their backs against the wall, MIBR chose Train. Despite an early 5-1 lead by MIBR, eUnited rallied back to win the half 9-6. However, MIBR’s CT side was the opposite story. After starting the second half 2-2, MIBR went on their own eight round win streak to take their map 16-11.

Playing on Inferno for all the marbles, MIBR were able to keep their CT side momentum from Train. They shut eUnited down, going up 11-4 at the half. A simple T side close out saw MIBR win the map 16-6 and qualify for the ECS Finals.

Qualified for the #ECS8 finals in Texas!
GGWP @eUnited#SomosMIBR pic.twitter.com/M3ySSNDcoC

MIBR’s recent results have been average at best, but they certainly look stronger since the pickup of Vito “kNgV-“ Giuseppe. Now, they have a chance to re-solidify themselves as a top-level Counter Strike roster. The Brazilians have a three-week break before their next event, so they have time to prepare.

With the ECS Qualifiers now over, all eight teams who will be traveling to Arlington, Texas for the finals have been decided.

The ECS Finals begin on November 28. Check back at Hotspawn for all the latest news and updates regarding the event.