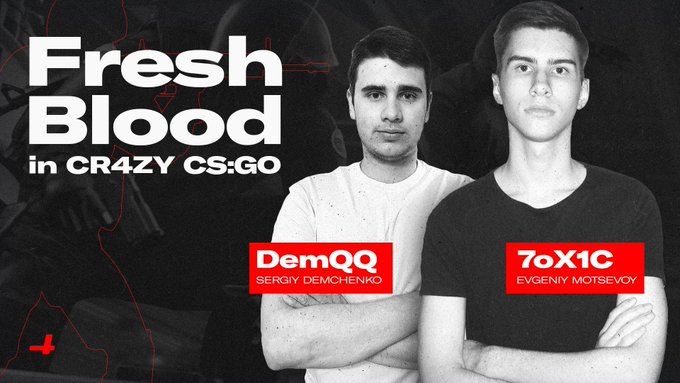 CR4ZY have picked up Ukrianian players Sergiy “DemQQ” Demchenko and Evgeniv “7oX1C” Motsevoy to make their Counter-Strike roster entirely Ukrainian. The two new players will replace Belarussian players Igor “dERZKIY” Radosavlevish and Roma “dOOBRIY” Rusak, who will be staying on with the organization and moving to the bench.

We just went full 🇺🇦 in CS:GO! Read everything about the changes in #C4CSGO including the statement from the man himself @JohntaCSGO.

“With the recent changes made for ESL One Rio Major 2020 we had to make necessary improvements in our CS:GO roster to stand a chance to qualify for the Minor and the Major eventually.” Stated CR4ZY in a press release on Thursday. “We are very pleased to announce that Sergiy ‘DemQQ‘ Demchenko and Evgeniy ‘7oX1C‘ Motsevoy are new members of CR4ZY.”

“This project is about a long-run.” Explained Ivan “Johnta” Shvtsov, CR4ZY’s CS:GO Coach. “We understand that we need time to get the results we aim for when we formed this roster but the pace we had was not as fast as we felt it had to be. So we decided to make this change to see how it will work.”

CR4ZY was briefly without a CS:GO team in January after they agreed to sell their team to the North America organization C0ntact Gaming. In February of 2020, they signed the Project X CS:GO roster coached by Johnta to replace their former squad.

We are back and hungrier than ever to prove that CR4ZY can once again stand amongst the greats.

When CR4ZY announced their decision to acquire the Project X roster, they stated their intentions to “become the one of the most promising top 20 teams in the world.” Thus far, they have struggled to live up to those standards. Since Feburary, CR4ZY has played in three BLAST Premier CIS Cup Open qualifiers, failing to qualify at any of those three events. Maybe the switch up in roster will help the team find greater success going forward.